Does this medical study prove that wearing gold is harmful? [closed]

Ask Question
Asked 1 year ago
Modified 1 year ago
Viewed 1k times
1
Closed. This question is off-topic. It is not currently accepting answers. 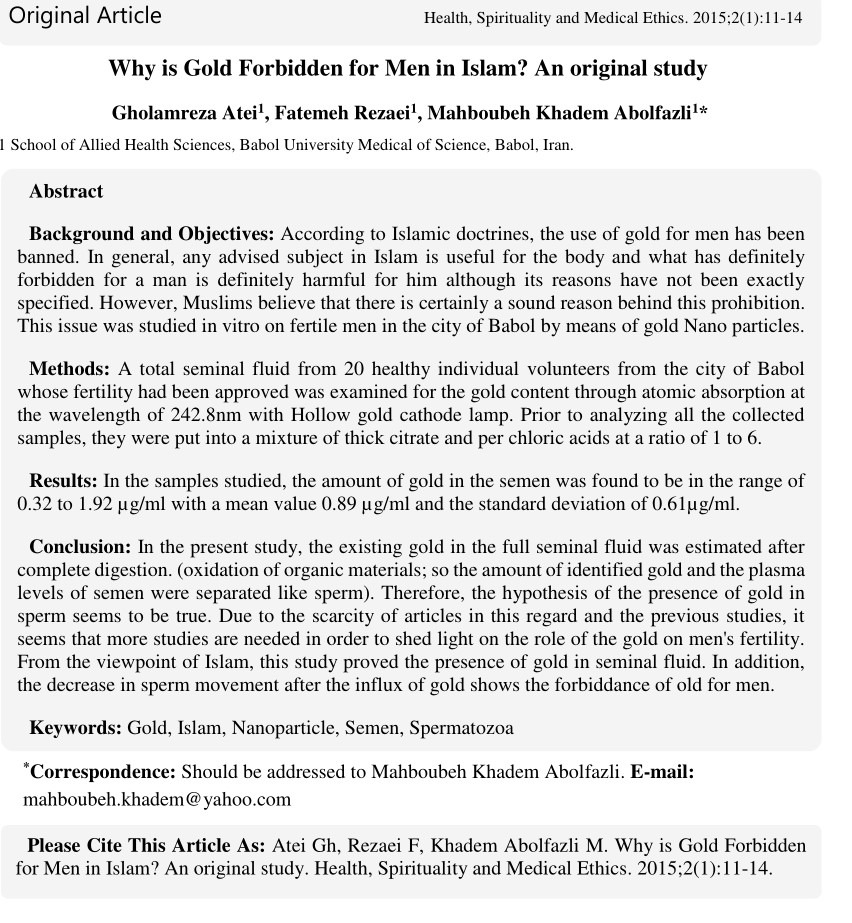 So I have this article that was sent to me by a friend of mine and it pertains to a ruling in the Quran (that declares that silk and gold are forbidden for men to wear). So the article claims that gold lowers ones semen count and causes it to fragment(or something like that). The reason I think its nonsensical is because(correct me if I'm wrong) gold is inert and can't interact with the human body. So I wanted to ask here to see what people(without any biases) would think of the article, I've attached a screenshot of the part of the article in question along with a link to the study with the full text:

Reset to default
1
Want to improve this post? Add citations from reputable sources by editing the post. Posts with unsourced content may be edited or deleted.

The commandment in Islam is that men should not wear gold, I.e. jewelry (https://sunnah.com/bukhari:5864) It is actually not forbidden to swallow gold for medical purposes, which was also occasionally done in the times of Muhammad (p.b.u.h) although the benefits were and still are disputed. (Renzo Console, 2013. "Pharmaceutical use of gold from antiquity to the seventeenth century", A History of Geology and Medicine, C. J. Duffin, R. T. J. Moody, C. Gardner-Thorpe)

Wearing jewelry, however, does not lead to significant quantities of gold in the body. Discussions on heavy metal from jewellery deal with alloys containing Cadmium, Lead, Nickel and other components but the gold by itself is hardly considered harmful.

experiment is hence unsuitable to give a physiological reason for the religious rule.

The existence of nano gold in semen is not unlikely because gold is very inert, and heavy metal in general stays in the body for a long time.

The proof that this has an impact is missing but implicitly assumed. I found an other article without citation that is likely to refer to this source but no scientific paper on the subject.

10
Does wearing a headband help for toothache?
20
Does too much study cause mental illness?
43
Does wearing prescription eyeglasses weaken your eyes?
6
Does this study show the CDC has covered up an autism/thimerosal link?
16
Does cupping have medical benefits?
1
Is this study on the dangers of vaccines peer reviewed?