Did Elon Musk put up a billboard saying "Defend billionaires"? 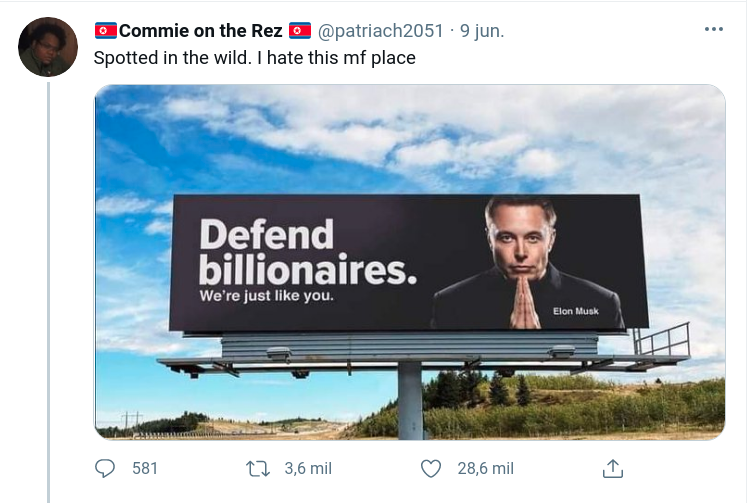 This is most likely a photoshop.

From comments on the post, it appears that 3ChordPolitics created this using either an image editor or a billboard generator.

antifa_superfrog Someone posted this on Twitter and everyone thinks it’s an earnest defense of billionaires hehe. 1d

Considering the facts that:

It's probably safe to assume that this is fake.

Not the answer you're looking for? Browse other questions tagged advertising .

24
Is “Your Baby Can Read” effective and helpful?
21
Is sun protection clothing a real alternative to sunscreen?
2
Has Verizon filed a patent for a device to watch you while you watch TV?
47
Did Esurance put up a billboard saying "Cover your home in a dick"?
17
Is this ad with a German coast guard mistaking "sinking" with "thinking" by Berlitz?
8
Is this a photo of an actual ad posted by sex traffickers?
5
Are Republicans running ads with images of bundles of cash specifically against Jewish candidates?
9
Is the shadow on this Dracula billboard cast by the stakes?
42
Did Parker Pens release an advertisement in Spanish that accidentally implied their pens would prevent pregnancy?