Are US colleges awarding more A-scores?

On the June 4, 2021, episode of Real Time with Bill Maher, the host makes the claim:

I was able to locate some supporting articles, such as timeshighereducation and theboar.org, yet they did not strike me as conclusive.

Is the claim made in the show true?

The title asks a broader question, while the body seems to focus on something more specific. Since CJR's answer seems to have addressed the more specific question, I'll try to address the broader one.

Yes, this is extremely well documented, and the trend has not been at all subtle. A good book on the topic is Grade Inflation: A Crisis in College Education, by Valen Johnson. Grade inflation has been especially pronounced at schools with highly selective admissions and in the humanities and liberal arts. It exists, but is less extreme, in STEM fields and at community colleges and other less selective institutions.

Popov and Bernhardt have collected a lot of data as a function of time. As an example, here are their numbers from Yale for average GPAs:

One could ask whether students are just doing better work these days, so that they deserve the better grades, but actually there is a lot of evidence that they are assigned less reading and writing than in the past, and that their critical thinking skills develop less now than they did in the past. This is discussed in Academically Adrift, by Arum and Roksa, who also demonstrate that the lower outcomes are not just because a broader demographic is going to college.

Johnson did some very clever studies to show that there really is a difference between STEM and non-STEM fields, and also that there is a cause-and-effect relationship between grades and student evaluations of teaching. For STEM/non-STEM, he looked at grades for both STEM majors and non-STEM majors in STEM and non-STEM classes, i.e., closer to or farther from their own specialization. For the cause-and-effect relationship, they devised a ruse in which students were allowed to give online teaching evaluations, then saw their grades, and then were asked to redo the teaching evaluations. They found that students revised their evaluations based on their grades.

A popular theory is that this trend really got going in the US during the Vietnam era, because professors didn't want students to drop out and get drafted. The beginning of the trend also coincided in time with the period when student evaluations of teaching became a thing, so that there was more pressure on instructors to give good grades. Part-time faculty are especially vulnerable to these pressures, and the trend toward teaching as many classes as possible using part-timers dates to roughly the same period. However, as far as I know these cause-and-effect relationships are not objectively documented in any scientific way. Anecdotally, though, the pressure from student evaluations is pretty obvious, though, for anyone who's been on a tenure committee or has been involved in hiring and retention decisions involving part-time faculty.

Well I tracked down the origin of the claim: http://www.gradeinflation.com/ 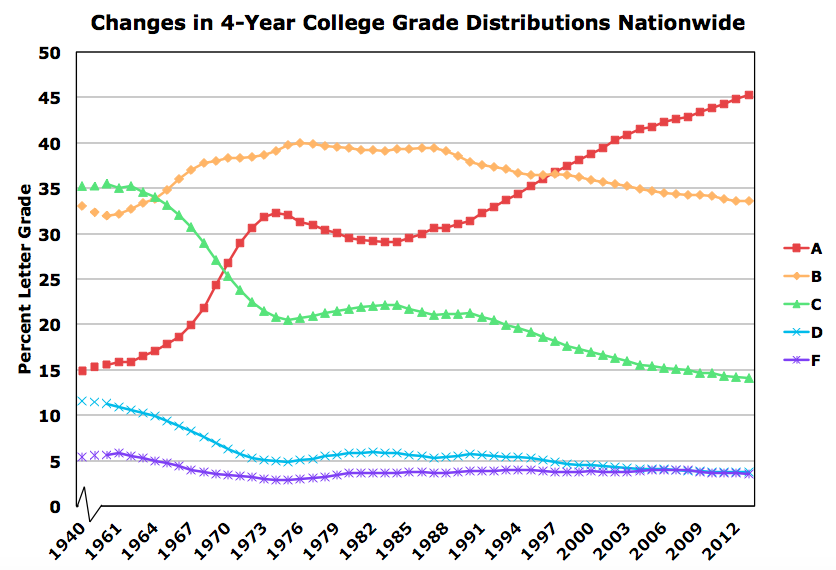 The authors hypothesize the following to explain these results:

On a national basis, the evolution of grading practices seems to be the result of a gradual abandonment of curve-based grading (Figure 2). Grading practices for private and public schools, which were similar prior to the 1960s, were quite different by the 1980s.

Basically, their theory is that college classes went from assigning grades based on a curve to defining grade achievement requirements at the beginning. That's a reasonably consistent explanation, and I certainly know that many universities require a clear explanation of grading in the course syllabus nowadays.

As always with "research" on the internet, the methods section (at least it exists) will not inspire confidence:

We assembled our data on four-year school grades (grades given in terms of percent A–F for a given semester or academic year) from a variety of sources: books, research articles, random World Wide Web searching of college and university registrar and institutional research office Web sites, personal contacts with school administrators and leaders, and cold solicitations for data from 100 registrar and institutional research offices, selected randomly (20 of the institutions solicited agreed to provide contemporary data as long as the school’s grading practices would not be individually identified in our work).

I would overall rate this as plausible, but the quality of the work is poor enough that I wouldn't say it's true.

In the early 2000s, Princeton changed their grading policies with the explicit goal of trying to curb grade inflation.

After an undergrad degree in the late 70s (in Canada, in a department that awarded about 10-15% A-s) and some grad school in the early 80s, I went back and got a US Masters degree in the mid 2010s, right as Princeton reverted the policy. Princeton was definitely a topic of discussion among the profs.

When I jumped back into the higher education game, I was astounded at the distribution of the grades that I was seeing. There appeared to be an expectation among students that they were entitled to an A, or, at the very least a B. That's not the world I did my undergraduate studies in.

Not the answer you're looking for? Browse other questions tagged united-states education .

15
Are colleges/universities conspiring with book publishers to inflate prices of textbooks?
15
Does Sallie Mae earn more from defaulted education loans than properly repaid ones?
28
Are Americans ignorant about the geography of the world?
28
Are Americans ignorant of geography and the world?
12
Does the US spend more on prisons than public education?
5
Are top quartile teachers radically better than their colleagues?
12
Are American schools frequently short of essential textbooks?
65
Are Democrats more likely to believe Astrology is a science?