Does climate change mean that weather becomes more variable in addition to being warmer?

In public media the notion that climate change is more than global warming gets repeated frequently.

Are there strong predictions that show that the climate becomes more irregular? Would we expect the weather in any particular place to suffer greater extremes (of temperature, precipitation, wind, etc.)? Are extreme weather events likely to increase (e.g. hurricane frequency or intensity, major wildfires...)?

The claim is repeated often in the media. Here is the Guardian's recent take (decrying the fact that some US sources fail to make a link that is widely accepted elsewhere; highlights are mine):

The phrase "extreme weather" flashes across television screens from coast to coast, but its connection to climate change is consistently ignored, if not outright mocked. If our news media, including – or especially – the meteorologists, continue to ignore the essential link between extreme weather and climate change, then we as a nation, the greatest per capita polluters on the planet, may not act in time to avert even greater catastrophe.

An older archived link from the BBC also makes the point:

Increasing temperatures means the World is likely to see less frosty days and cold spells, but we are expected to experience an increase in heat waves and hot spells

An intensification of the Asian summer monsoon is expected

Are these reliable predictions or global climate models or are they just the material that makes news a little more interesting thereby leading to coverage being dominated by the less solid parts of climate science?

On of the key things that separates a scientific prediction from the kind of predictions that you read in newspapers is that science isn't vague. A scientist should be able to give you a probability for whether the event he predicts happens.

NB the question is about whether weather variability changes, not just the average weather. That is, is the normal range of variation higher across a year as a result of climate change.

Global warming “significantly” increased the odds of some of last year’s most unusual weather, including the brutal Texas drought and the freakishly warm November in Britain, according to findings released Tuesday alongside the latest “state of the climate” report in the Bulletin of the American Meteorological Society.

Dr Peter Stott and others have been using attribution science to look at these causes. See, for example, Human activity and anomalously warm seasons in Europe:

The attribution analysis described here employs temperature data from observations and experiments with two climate models and uses optimal fingerprinting to partition the climate response between its anthropogenic and natural components. These responses are subsequently combined with estimates of unforced climate variability to construct distributions of the annual values of seasonal mean temperatures with and without the effect of human activity. We find that in all seasons, anthropogenic forcings have shifted the temperature distributions towards higher values.

(my bold in each quote)

See also Tamino on Climate extremes and anthropogenic climate change and Pete Sinclair on "Welcome to the rest of our lives".

Finally, in the IPCC's 2012 special report on climate extremes (SREX), we find:

Entropy and Variance are different kind of quantities. Variance is a quantity to describe mathematically the fluctuation of a distribution of measurement values for e.g. Temperature. Temperature is thermodynamical linked to Entropy of a System (defined by the probabilistic model of a distinct system). Entropy is physcial prinicple and used in climate modeling to rule out distinct unphysical/unlikely scenarios. Here is (Paywall) article using a maximum entropy method to calculate local climate annual cycle. AFAIK this method plays no important role in several current IPCC climate models. But some do write papers & blogs about it, judge yourself if its a discussion or monolog ;)

But IMO your question basically is, will the variance of global average temperature development be higher than in the past. 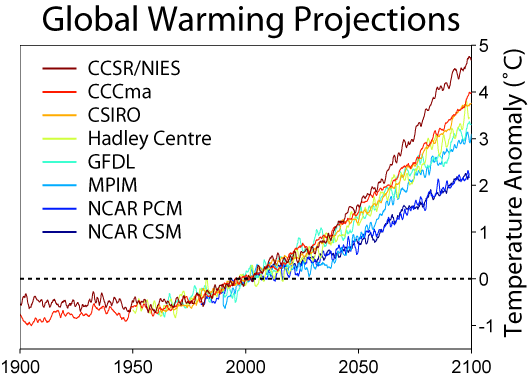 This past-future prediction of global average temperature shows imo the answer. If you compare the fluctuations of the average temperature of the red lines in past and future, you cant make up a big difference despite it gets hotter. These models are based on calculations and assumptions how climate parameters will develop in future (economic growth, environmental changes,...). Also climate can become less predictable (doesnt have to mean less irregular!), which would mean, the variance between different climate model scenarious inreases, as models are based on physics of deterministic chaos (e.g. additional physical processes, new environment influencing technologies). The more unknown parameter, the less predictable these model calculations get of course. But for a single line (model) in the picture there is no much bigger fluctuation of the average global temperature (e.g. no sinus like cycles) despite the rising trend. Interesting would be how variance of global avg. temp. relates to 0-1900 but this is outside data and simulation capabilities to make senseful comparisons

Beside this you have to distinguish between climate and local weather. Weather will actually become more irregular in sense of more or stronger extreme weather. Here is a scientific consensus by a majority

Not the answer you're looking for? Browse other questions tagged climate-change meteorology .

5
Are storms getting more or less severe in the long term for Australia?

2
Will a warming world directly damage human health?
13
Are fossil fuels making the world greener?
4
Has climate change measurably increased the likelihood of tropical storms such as Haiyan?
29
Did fertilising the ocean with 100 tons of iron sulphate increase the salmon catch by over 100,000 tons?
14
Did global warming exacerbate the Syrian conflict?
48
Does the logarithmic nature of global warming invalidate climate change claims?
12
Will global warming save millions of lives?
6
Is climate change causing more storms and worse storm damage?