Does the production of a home PV solar panel provide a net benefit to the environment?

Considering everything that goes into producing a single PV solar panel; from obtaining the necessary materials, transportation etc. is there a net benefit to the environment over the lifetime of the panel?

A net benefit would be one in which less hazardous material is produced as a result of having created and used the panel over its 25 year warranty period as opposed to using regular grid power*.

To provide something of a typical example for which to make calculations from the Australian Energy Matters site it provides the following figures:

For the purpose of this exercise, consider the panel to be a Sharp 175Watt 24Volt which has been used in many installations in Australia and what I have on my roof:

Australia's electricity is currently a mix of (approx.):

*Note regarding grid power. Some energy providers in Australia now provide a green option for electricity where they can source up to 25% of their electricity from renewable sources for as little as $1 extra per quarter.

Yes, there is a net environmental benefit from photovoltaic panels.

It would be possible to contrive a corner case where there was not a net benefit (for example, having a PV system illuminated only by a light bulb, rather than by the sun); but such cases are extremely rare.

Let's break down the big, somewhat cloudy question of "net environmental benefit" into some component questions that are commonly raised. Does PV have net energy production? How much greenhouse gases from fossil-fuel production does it displace, when the full product lifecycle is accounted for? How do aggregate damage costs compare? I'll deal with each of those in turn.

Fthenakis and Alsema (1) looked at the net energy production of photovoltaics, based on 2004 technology (things have improved a lot since then). They found energy payback times of between 1.0 and 2.2 years, depending on the specific panel technology, and where it was manufactured. So all energy generated after that time is net energy production. Systems typically last 15-30 years.

The 2009 review of life cycle assessments by Sherwani, Usmani and Varun (3) found energy payback times of 1.5-5.7 years, for systems with lifetimes of 20-30 years.

In 2012, Fthenakis (4) looked at historic trends of energy payback times [EPBT], and found that they'd been improving for 40 years (NB the vertical axis has a log scale): 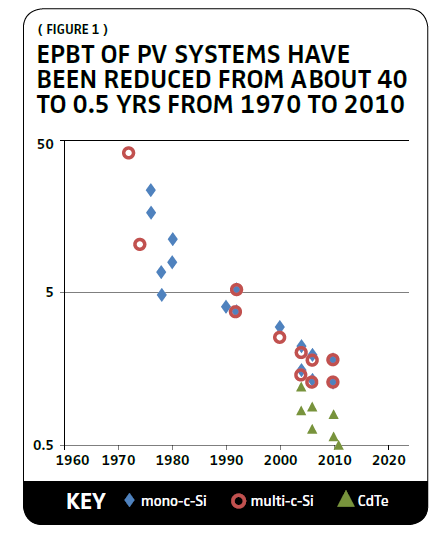 That gives values for energy returned on energy invested (EROEI) in the range 10-40.

So PV has a high net energy production

First, let's note that the power into a grid and the power consumed must match at all times. So if PV generation increases, some other source of power must decrease, in order to keep the system balanced. So some other generator will get turned down. The type of generation being displaced does make a difference. In most of the world, in 2012, it will usually be a fossil-fuel plant - coal or gas (see the World Energy Outlook, IEA).

Fthenakis and Alsema (1) cite the ExternE and Australian Coal Association research on full-lifecycle greenhouse-gas emissions, and found that monocrystalline silicon PV came out at 100-180gCO2e/kWh, whereas coal was 900g, and gas CCGT was 400-439g. Their own calculations for different PV technologies gave even lower results: 37g for polycrystalline silicon; 21g for EU Cadmium Telluride; 25g for US Cadmium Telluride.

On a full-lifecycle analysis, there are substantial greenhouse-gas savings with PV.

Flimzy poster, in comments on the question, notes that:

you're often comparing apples and oranges. Coal-generated electricity emits carbon into the atmosphere, whereas manufacturing a PV cell may result in some liquids being emitted into a river ... how do you measure which is "overall worse?"

That's true. And there is a standard method for aggregating externalities, which is to monetise each aspect of damage, and then sum those costs.

Total environmental damage costs from PV, are less than those of the fossil-fuel generation that they displace.

For anyone interested in the detail of metal extraction for PV, Ftheankis, Wang and Kim looked at the specifics for zinc, copper, aluminum, cadmium, indium, germanium, gallium, selenium, tellurium, and molybdenum (2).

(4) Fthenakis V. How long does it take for photovoltaics to produce the energy used?, in PE Magazine, from the National Society of Professional Engineers, Jan/Feb 2012. PDF available here.

Not the answer you're looking for? Browse other questions tagged environment technology .

11
Does using ethanol fuel save money, and is it better for the environment?
30
Does the phase-out of incandescent light bulbs measurably reduce overall electrical power consumption?
7
Do photovoltaic solar panels need replacement after 20 years?
5
Are Maryland's vehicle emissions tests a net benefit for the environment?
103
Does the production of a Tesla battery produce as much CO2 as driving 200,000 km?