Has Israel used banned weapons against the population of Palestine?

According to this graphic from the Facebook group zionistlies, 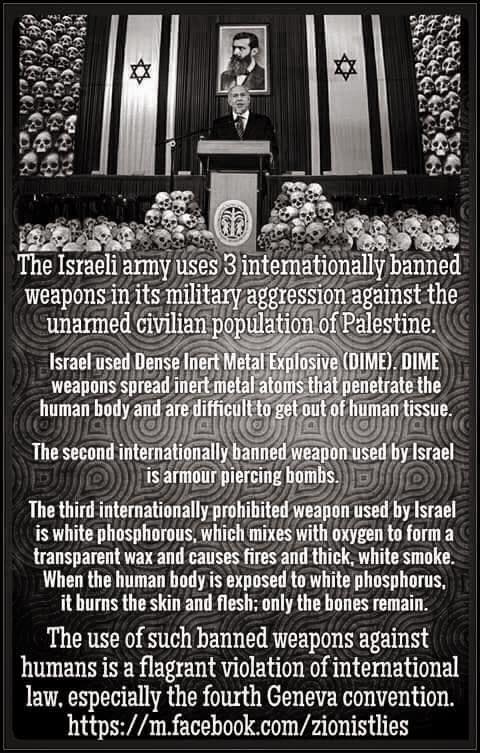 The Israeli army uses 3 internationally banned weapons in its military aggression against the unarmed civilian population of Palestine.

The third internationally prohibited weapon used by Israel is white phosphorous, which mixes with oxygen to form a transparent wax and causes fires and thick, white smoke. When the human body is exposed to white phosphorus it burns the skin and the flesh; only the bones remain.

The use of such banned weapons against humans is a flagrant violation of international law, especially the fourth Geneva convention.

Has Israel used these weapons in Palestine,

And are these weapons banned by international law?

This graphics is a mess, but is partially correct.

has a relatively small but effective blast radius

And brings Palestinian claims about its usage, but I couldn't find any other hard proofs besides those few claims.

There seems to be concerns about the materials being carcinogenic and about hard to treat wounds, but they are not banned

It's no more illegal than normal blast-and-shrapnel weapons, but it is a mystery.

The results of using this bomb are horrible, but this is a weapon meant to kill but on the other side tries to minimize collateral damage.

I suppose that by "armor piercing bombs" they meant depleted uranium armor piercing shells, those are using the high mass of uranium as a better way to penetrate armored vehicles. There is no explosion (and certainly no nuclear explosion) but the material itself might (is?) have health hazards but mainly to the people operating it and less to people being hit, again this is a shell designed to kill and any health issues are related to third parties.

There are Palestinian claims about depleted uranium shell usage in Gaza. The UN didn't find evidence for usage even in Lebanon where it makes more sense to use armor piercing shells, while in Gaza the fighting is against "soft targets".

Depleted Uranium weapons are not banned although there are intentions to have treaties against their usage.

White phosphorous can have multiple uses, it can be used directly against people, as an incendiary weapon, as a smoke bomb but also as long lasting illumination or marking. Israel used the latter two during operation Cast-Lead in 2009. Translation from the Hebrew article

But due to criticism the IDF stopped using it. Translation from the Hebrew article

During Operation Cast Lead, international criticism of Israel intensified due to its use of phosphorus bombs in populated areas. Contact of a person with white phosphorus causes severe burns. The IDF did not deny that they used bombs containing phosphorus in cast lead, but said that they did so in accordance with the law and not in populated areas, but in open areas. However, in light of the criticism, during the operation, senior military officials ordered to stop the use of these bombs.

The status of the weapon is complex, it's existence is not banned but it shouldn't be used against people.

Not the answer you're looking for? Browse other questions tagged law israel palestine united-nations .

6
Has the UN low variant for population growth been the historically correct figure?
21
Does Israel have nuclear weapons?
20
Is Israel the only "Free and Democratic" country in the Middle East?
5
Has Israel broken over 60 UN resolutions?
3
Did the Nazi SS set up training camps to assist Jews travelling to Israel?
21
Did UNESCO pass 46 resolutions against Israel and 1 against any other country in one period?
5
Is information about Israel/Palestine in this infographic accurate?