Did Elon Musk's bitcoin transactions release more carbon in a few days than the amount saved by all Teslas ever sold?

Elon Musk’s recent large-scale transactions in proof-of-work-based Bitcoin released more carbon into the atmosphere in just a few days than the amount saved, in principle, by all the Teslas ever sold.
("Non-fungible tokens aren’t a harmless digital fad – they’re a disaster for our planet")

Is this possibly true? They've sold somewhere around 1 million Teslas, so this seems like a pretty big claim. I read that bitcoin overall is releasing more carbon than all of New Zealand, but I don't understand how to attribute the specific carbon emissions of a transaction. Or is the key to this sentence that Teslas per se don't reduce carbon very much because the electric grid is still high on carbon?

climate-change bitcoin
Share
Improve this question
asked May 30 at 20:09

tl;dr: The claim cannot possibly be true, unless "Elon Musk's recent large-scale transactions" refers to all bitcoin transactions over the last six months.

A detailed analysis by Carbon Brief finds that over its lifetime (assuming 150,000 km driven), a Tesla Model 3 results in 10 to 19 tonnes of carbon emissions, depending on the country (and subsequent carbon emissions of the grid).

Comparing models on fueleconomy.gov, the Model 3 is the most efficient vehicle in Tesla's lineup with a current rating of 142 miles per gallon electric (MPGe), compared to 89 for the original 2014 Model S. 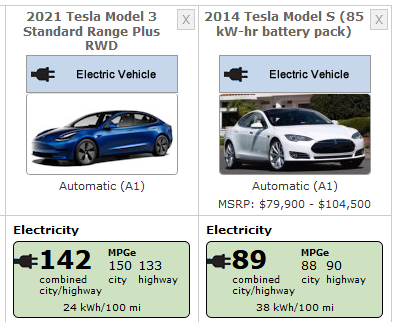 Taking the Model S as the low end, a Tesla results in 14 to 29 less tonnes of CO2 emissions than a conventional vehicle over its lifetime. This is compared to the average new conventional vehicle sold in Europe in 2019. If the efficiency of all cars sold in all Tesla markets since 2014 were the basis of comparison, the high end of the savings range would likely increase.

Sources on Tesla sales to date include reviews of Tesla quarterly reports and some estimates. This chart from Statista reports 1,474,900 Teslas sold globally from 2016 through March 2021. Another source reports U.S. sales of 42,105 Teslas from 2014 to 2015, bringing the total to 1,517,005. Allowing for some global sales in the early years, and additional sales since March 2021, a figure of 1.6 million Teslas sold to date seems reasonable.

Combining the per-vehicle savings range with the total Tesla sales to date results in savings of 23 to 46 million tonnes CO2 emissions reduced by all Teslas sold to date.

According to the digiconomist blog, the carbon footprint of a single bitcoin transaction as of March of this year is 706.47 kg CO2.

In May, there have been approximately 252,000 bitcoin transactions per day, for a total daily emissions of approximately 178,000 tonnes of CO2.

While this is staggering and depressing, it's still significantly long enough that we don't have to figure out what the quote means by "Elon Musk's recent large-scale transactions."

Not the answer you're looking for? Browse other questions tagged climate-change bitcoin .