Are these claims about the changes in the economy during Obama accurate?

An image was recently posted on politics about how the economy changed under Obama. While that question was not asking about the validity of the claim itself, instead focused on the validity of trying to infer the successfulness of a presidents polices based off of changes in the economy, I'm curious about the accuracy of the image itself. 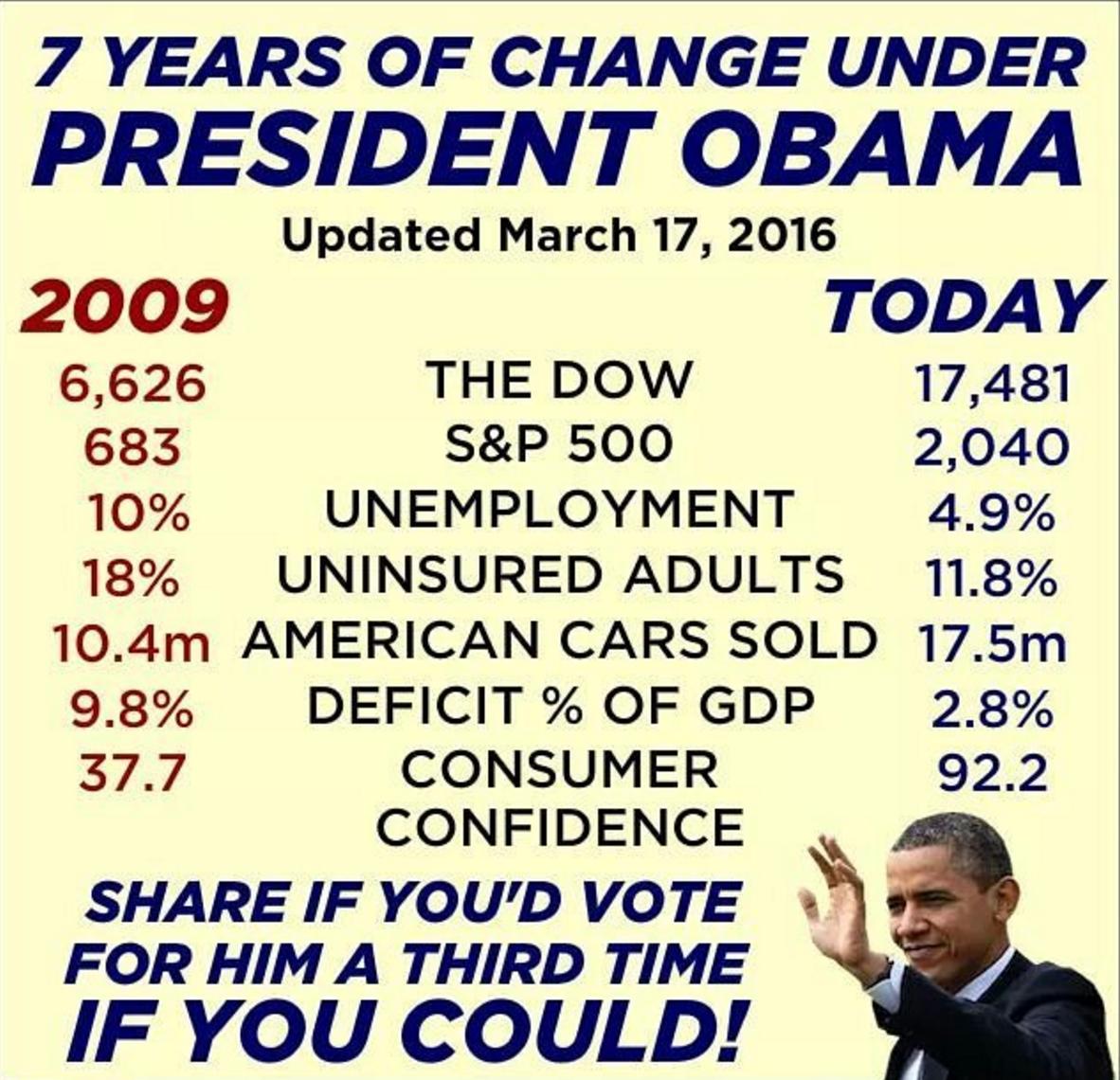 Are these claims all accurate?

united-states economics barack-obama
Share
Improve this question
edited May 12, 2021 at 18:37

On a glance, the numbers are entirely plausible. Obama took office during the Great Recession and his opening numbers will reflect a poor economic situation. He left office with the economy in good shape, though still weakened by the recession in key areas, and with the Affordable Care Act in full swing.

While there are inconsistencies in exactly when in 2009 their snapshot was taken, there's no trend of cherry picking. Sometimes it makes Obama look better (unemployment) sometimes they could have made Obama look better (consumer confidence). None of the choices effect the overall trend. I looked for matching numbers from a reliable sources whenever possible.

Some of the statistics obviously have no exact number on March 17th, 2016. This is taken to be what was available at the time, which in some cases would be February statistics. I was not always consistent about this in my research, but it shouldn't throw things off much. Please edit to correct.

Both the DOW and S&P claims use 2009 dates within a few days of each other. The difference does not materially affect the result.

US Bureau of Labor Statistics - Graphics for Economic News Releases. They've picked the worst value for 2009. Their 2016 value is basically correct. There is no exact number for March 17th, 2016.

Unlike the DOW and S&P numbers which uses March 2009, here they're using October. This makes Obama look a bit better, but does not materially affect the claim.

Both are too high, trend is correct.

The numbers are off, they're both too high, but the trend is accurate. This reflects the impact of the Affordable Care Act aka "Obamacare". There is no exact number for March 17th, 2016.

According to Income, Poverty, and Health Insurance Coverage in the United States: 2009 from the US Census Bureau, the midpoint of 2009 was 16.7%.

Health Insurance Coverage in the United States: 2016 says 8.8% had no health insurance at all during 2016 and 8.6% who were uninsured when interviewed.

These numbers reflect an even larger fall in the uninsured, down 7.9% vs 6.8% in the claim.

"Cars" here seems to be "light vehicles" which includes light trucks such as vans, minivans, SUVs, and pickups which most people would call "cars". According to Statista the numbers are correct.

Note that this is the % of the year's budget as GDP, not the total debt owed.

Correct, and not even the worst numbers for 2009.

The US Consumer Confidence Index is the result of a survey by The Conference Board. It puts out monthly reports which sometimes revise the previous months.

While the numbers do not line up exactly, without sources this is not surprising, especially for the "fuzzier" numbers like uninsured (based on surveys). I find no misleading nor inaccurate statistics in the claim.

As far as the Dow Jones goes, according to the data reported at Yahoo Finance the lowest reported value is 6,470 (March of 2009) and the DJIA did rise to about about 17,000 over the indicated time frame. So it is possible depending on the exact date used as a baseline.

Using the same Yahoo data for the S&P 500 indicates that the figures for that metric are pretty much in line with what occurred between March 2009 and March 2016. Though there may be a bit of cherry picking the lowest value for the starting point, and the highest value for the ending point.

Overall, for the features I've checked, the overall trend and magnitudes of these changes are approximately correct. There may be a bit of cherry picking of the exact dates (or maybe estimates) going on -- pick the lowest/worst value for the 2009 point, and the highest/best value for the 2016 point, but not to such a degree as to totally invalidate the content of the post.

Not the answer you're looking for? Browse other questions tagged united-states economics barack-obama .

60
Has Barack Obama achieved these goals in the last six years?
14
Are these statements about Trump accurate?
64
How accurate are these nine charts of the economy under the Obama Administration?
38
Are these photos of protests posters against the Obama Administration real?
1
Are these figures about sexual harassment by Trump, O'Reilly, Ailes and Obama correct?
29
Are these pictures of Osama Bin Laden with Obama, Rice and Hillary Clinton authentic?