Is Japanese language "cleaner" than English in terms of spreading coronavirus?

I was watching a video from Abroad In Japan channel where Chris Broad, the creator of that channel talks about a TV show in which "experts" discussed about the reasons why number of cases of covid-19 were low in Japan and this has something to do with the Japanese language itself. A demonstration was done in which a test subject was made to stand in front of a tissue paper and made to say one sentence both in Japanese as well as in English language. The sentence was Kore wa pen desu which translates to "This is a pen". 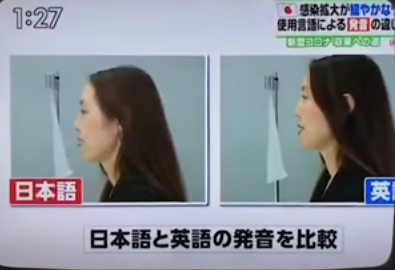 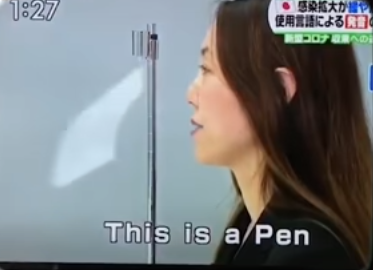 The "experts" in that TV show were shocked by the result and declared that Japanese language is the reason for less cases in Japan. Chris joked and humored about this experiment and declared this as utter nonsense.

But, I became skeptical about the conclusion. Can languages play a role in spreading coronovirus? Can you say a language is "cleaner" than the other in terms of how less it likely spread the virus? Are there any research papers/studies done which shows if a language can relate to number of cases in a particular country?

27
Did Shakespeare introduce over 1700 new words to the English language?
66
Do people think in a language?
25
Are there more English speaking people in China than in the USA?
24
Do Japanese people have a lower body temperature than caucasians?
19
Is the "I before E" English spelling rule wrong more than it is right?
12
Did the head of the Joint National Committee on language claim Jesus spoke English?
5
Were summer colds up in 2021?