Is information about Israel/Palestine in this infographic accurate? 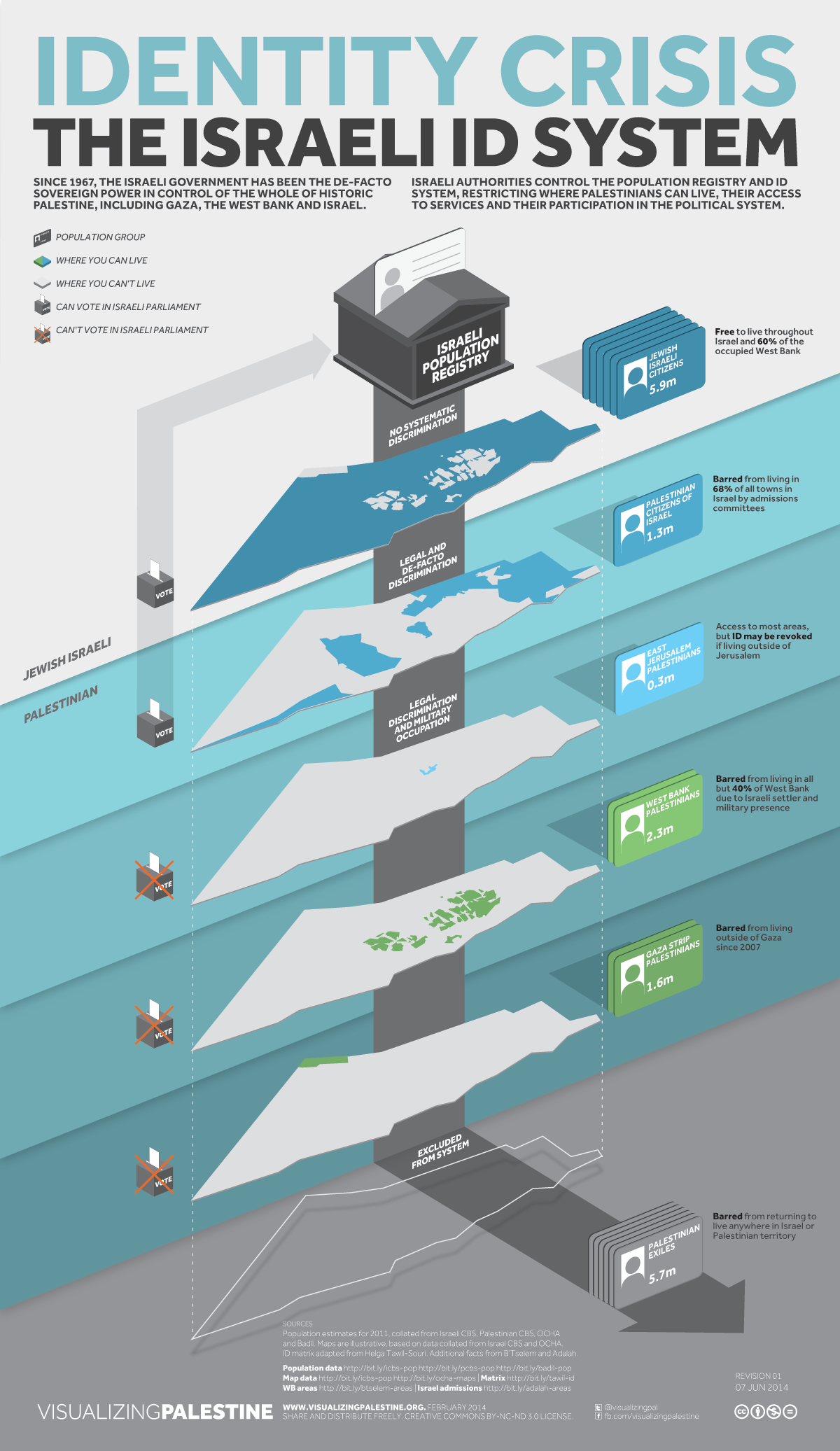 The infographic depicts the different status of the population of Israel/Palestine. However, no so much information is reported alongside the infographics. So my question is: is the information reported accurate? In particular, I am interested in the claims regarding Israeli Arabs and Palestinian in Jerusalem:

There are 2 questions here, but I'll focus on one of them:

Can the ID of East Jerusalem Palestinians be revoked if they live outside Jerusalem?

This seems to be true, though it's not as direct a policy as the infographic makes it out to be. Currently, East Jerusalem Palestinians can have their permanent residency status revoked if you move outside of Israel for more than 7 years. While Palestinians who move back can reapply for residency, the process is slow and complicated. From 1995-1999, the policy was much more strict and thousands had their residency revoked for living outside the Jerusalem borders.

After Israel captured East Jerusalem in 1967, they offered permanent residency (with the option to apply for Israeli citizenship) to the Arab Jerusalemites who were living there.

the “permanent resident” status granted to most Arab Jerusalemites after the annexation. This bestows the right to work, get social benefits and vote in local elections, but not a passport or a vote in Israel's national elections

Since 1995, Israel has stripped residency status from thousands of East Jerusalemites for living outside of Jerusalem, but the criteria for revocation has changed over the years. According to a 2007 article in The Economist, Israel imposed a strict process from 1995-1999:

In 1995 Israel began to strip the status from Palestinians who could not prove that their “centre of life” was in Jerusalem. It stopped four years later, after it emerged that the policy was making more of them move back.

After that, they brought the policy in-line with their normal residency policy for non-naturalised immigrants, despite East Jerusalemites not actually being immigrants

Now they lose their status if they live abroad for more than seven years or get residency or citizenship in another country. In this respect, Israel treats them like other non-naturalised immigrants, “though it was Israel, in effect, that immigrated to them,” points out Yotam Ben-Hillel, a lawyer at HaMoked, a legal-advice centre. ... Even so, Arab Jerusalemites can get their residency back if they have visited Israel at least once every three years.

The concern for abuse comes from subjective enforcement and the requirement for East Jerusalemites accused of being non-residents to prove their status:

The trouble is that they lose it automatically, sometimes without knowing, and then have to prove their right to it. ...

However, Jerusalemites who live elsewhere in the West Bank can lose their residency too. Since merely leaving the city entails no border-crossings and thus leaves no records, the authorities subject anyone they suspect of living outside it to a battery of checks, from producing municipal tax receipts and utility bills to enduring frequent home visits from inspectors who poke through sock drawers and kitchen cabinets.

This process has continued to the current day, according to Human Rights Watch in a 2018 article written by NPR, though the rate seems to have decreased:

But according to an August [2017] report by Human Rights Watch, Israel has revoked the residency status of at least 14,595 Palestinians in East Jerusalem since Israel captured the territory from Jordan in 1967. The group cited data that lawyers and rights groups collected from Israel's Interior Ministry through freedom of information requests and court cases

In recent years about 100 Palestinians annually have been stripped of their residency rights in the city, though in 2008 alone more than 4,500 Palestinians lost their residency permits, according to data compiled by the rights group HaMoked. The Interior Ministry did not respond to several requests by NPR for comment.

Most of these revocations happened to Palestinians who left the city for an extended period of time, rights group say. Some groups have called it a "silent transfer" of Palestinians out of the city amid a battle over East Jerusalem, which Palestinians want to be the capital of a future Palestinian state.

But unlike Israeli citizens in Jerusalem, Palestinians native to Jerusalem can lose their residency status and Israeli social benefits if they are away from the city for more than seven years, according to Shenhar. This affects Palestinians who go abroad to study or work, or who marry and have children abroad and wish to move back to their native city with their families. ...

Long legal battles have brought changes. Palestinians who wish to return to East Jerusalem are generally able to restore their residency status if they request it, Shenhar said. But they must first live in Jerusalem for at least two years on temporary status, and during that time, if they return with a spouse and children, their families must live without Israeli social benefits, he said

Not the answer you're looking for? Browse other questions tagged israel palestine .

35
Is this map of Israel-occupied territory accurate?
17
Did Golda Meir make this quote about curfews for women?
32
Did the Deputy Chief of Staff of the Israeli Army say this about human trafficking?
28
Did Ben Gurion say this about conquering Palestinian land?
21
Has Israel used banned weapons against the population of Palestine?
4
Is this data about COVID Vaccination breakthrough infections from the Israeli government?