Will there be millions of cicadas per acre when Brood X emerges this year?

A Time article about the upcoming emergence of Brood X cicadas in the U.S. has the following quote from a biologist:

“It’s not something you can ignore,” says John Cooley, a biologist at the University of Connecticut. “When they come out it’ll be millions per acre.”

I found another article about the Brood X cicadas with this quote from a professor:

Since one acre is equivalent to 6,272,640 square inches, about 8,363,520 cicadas could fit in one acre if they were all side by side next to each other. So if there were millions of cicadas per acre, the ground would practically be covered with them if they were all sitting on the ground. If there were tens of millions of cicadas per acre, there would be multiple layers of them completely covering the ground.

Of course, when the cicadas emerge, they won't all be sitting on the ground - they'll spend a lot of time at various heights in trees. But still, I am skeptical of the claims that there will be millions or tens of millions of them per acre. Is that really true?

Densities of cicadas underground are very great — Dybas and Davis report emergence densities of over 300 nymphs per square yard or about 1,500,000 per acre.

Where "Dybas and Davis" is A Population Census of Seventeen‐Year Periodical Cicadas (Homoptera: Cicadidae: Magicicada) Ecology 43, 432 (1962).

On the other hand, this article ESTIMATING NYMPHAL POPULATIONS OF 17-YEAR CICADAS IN EASTERN OHIO, 1968 finds in the hundreds of thousands per acre (this is not Brood X though).

"...the ground would practically be covered with them". Yes, this will happen. This cicada segment from the April 27th PBS News Hour at minute 3:42 shows the ground covered with cicadas (from the last time?) Then the property owner says there were so many moving around on the ground that he got sea-sick. Earlier it has a nice map of the Eastern US states where they live.

But, from personal experience they're not going to pop out of every lawn that way, In a semi-urban area it will merely be buggier and noisier than usual.

This is in wooded areas. When they emerge from the ground, they don't stay there. They go up in the trees and make their loud buzzing noises. Here is a picture from the web... 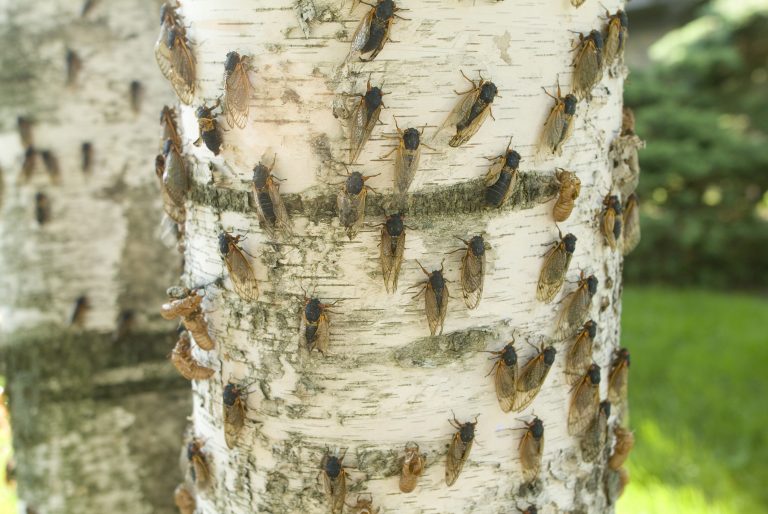 56
Is a writer named Lisa Holst responsible for the belief that everyone eats eight spiders a year?