According to the Wright brothers, the two inventors flew 105 times in 1904 (near a streetcar station called Simms, situated at the outskirts of Dayton, Ohio).

“Through the courtesy of our local newspaper reporters, we have been enabled to carry on our experiments this year within a short distance of our city without the knowledge of this fact becoming generally known. We have made some flights in every month since June, excepting July. ... Although 105 landings were made during this seasons’ experiments the machine has suffered serious damage only a few times and these in flights in which the landing was accidental and not premeditated. Flight after flight has been made without any damage to the machine whatever."

A new free book titled The Wrights and their 1904 impossible flights (105 in total) challenges these claims arguing that, in fact, the brother just tried to fool the newspapers (especially those of Dayton), Octave Chanute (a personality of the aeronautic world of the time), Georges Spratt (a fellow aviation enthusiast), Carl Diesentbach (the New York correspondent of the German journal "Illustrierte Aeronautische Mitteilungen") and both the US War Department and British War Office, by pretending they had performed 105 flights in 1904 and, in many instances, describing aerial trips that are physically impossible. For example, the flights of August 13, 1904, when the plane, Flyer II, got energy from the headwind, which accelerated the apparatus.

"The Press", the only newspaper that, on May 26, 1904, furnished a list of witnesses (friends of the Wright family and an unnamed reporter) who saw the alleged flight of the same day, later in the year, on December 17, 1904, acknowledged that nobody had ever seen the two inventors flying powered planes. 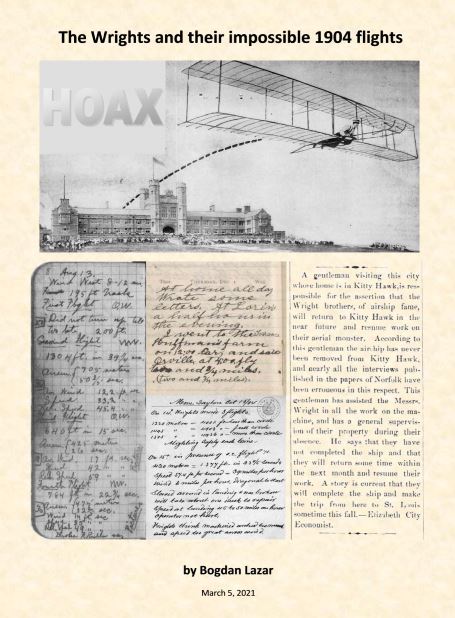 Besides this, two articles, one from May 1904 (see 1), and the other published in December 1951 (see 2), both of them quoting people who personally knew the Wright brothers (see the explanations below), say that the December 17, 1903, flights did not happen. This implies that, instead of 105 + 4 = 109 takeoffs and landings in total claimed for 1903 and 1904, the two Daytonians performed zero flights.

Elizabeth City Economist: A gentleman visiting this city whose home is in Kitty Hawk, is responsible for the assertion that the Wright brothers, of airship fame, will return to Kitty Hawk in the near future and resume work on their aerial monster. According to this gentleman the airship has never been removed from Kitty Hawk and nearly all the interviews published in the papers of Norfolk have been erroneous in this respect. This gentleman has assisted the Wrights in all their work and has a general supervision of their property during their absence. He says that they have not completed the ship and that they will return some time within the next month and resume their work. A story is current that they will complete the ship and make the trip from here to St. Louis sometime this fall.

The text says that, according to a man that worked for the Wrights and took care of their things left behind at Kitty Hawk, the two inventors hadn't finished Flyer I as of May 26, 1904. In other words, this machine did not fly on December 17, 1903!

Wilbur and Orville Wright are credited with making their first powered flight in a heavier-than-air machine on Dec. 17, 1903. But Alpheus W. Drinkwater, 76 years old, who sent the telegraph message ushering in the air age, said the brothers only “glided” off Kill Devil Hill that day. Their ﬁrst real flight came on May 6, 1908, he said. (Source: New York Times, Dec. 17, 1951.)

As a note: The Wrights left Kitty Hawk, North Carolina, in December 1903 and only came back in April 1908.

The Scientific American published Genesis of the First Successful Aeroplane in December 15, 1906, which asserts that they had communicated with all of the seventeen witnesses to the Wrights' developmental flights and had no reason to doubt the accounts of the eleven that responded.

These witnesses were interviewed within a year of witnessing the flights and the magazine was able to converse with each of the respondents to glean additional detail.

...it was suddenly announced that two young machinists had produced an aeroplane which had made a continuous flight, with one of the inventors on board, of over twenty miles at a high speed and under perfect control.

Their success marked such an enormous stride forward in the art, was so completely unheralded, and was so brilliant that doubt as to the truth of the story was freely entertained; especially as the inventors refused either to give access to the machine or to make any statement as to its broad details.

The SCIENTIFIC AMERICAN, however, wrote to the seventeen eye witnesses who were mentioned as having seen the various flights and received letters from these reputable local residents, and published extracts therefrom, which completely set at rest all doubt as to what had been accomplished. (emphasis mine)

The main thrust of the claim - that the flights were impossible - relies on the assumption that all of the measurements in the Wrights' correspondence at the time were accurate. Their understanding of the dynamics of flight would not have been perfect, nor can we be certain of the accuracy of their apparatus for measuring wind or ground speeds. Indeed, their inability to accurately measure distances traveled for flights involving turns is explicitly mentioned in the Scientific American article:

An inability to accurately measure the distance covered would apply to essentially all of the long / successful flights in 1904 / 1905 as they were limited to circling the aircraft within a relatively small field.

This does not detract from the fact that the Wrights continued to develop their Flyer II throughout 1904 and that there were a significant number of witnesses to their test flights.

The first hand "witness" Robert Coquelle returned to France, in December 1905, with weak evidence regarding the more than 160 powered flights claimed by Wilbur and Orville for the interval December 17, 1903 - October 5, 1905.

In December 1905, because the Wrights had already mailed a few letters to France (to L'Aerophile and Capt. Ferdinand Ferber), trying to sell their aeroplane, L'Auto, a newspaper of Paris, sent Robert Coquelle, a journalist, to Dayton to investigate the claims of the two inventors. Once back home, he wrote an extensive article in four parts. In short, this investigator met the brothers, interrogated a few witnesses, saw the empty shed near Simms Station where the plane had been housed and brought to France a drawing of the claimed flying machine and a list of witnesses. The general tone of the article betrays the serious doubts Coquelle had regarding the honesty of the Wrights and their witnesses who seemed to say, all of them, the same thing as if they were told before what to report.

(For reading the four Parts please click, Translate to English in your browser.) 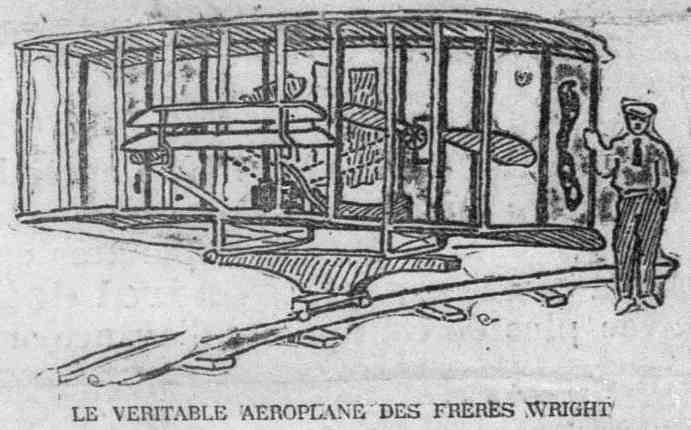 In conclusion, the Wrights flew planes in 1903-1905 only if we are ready to trust their word and that of the witnesses on their list.

Not the answer you're looking for? Browse other questions tagged aviation history-of-science .

34
Were the Wright Brothers the first to fly?

34
Were the Wright Brothers the first to fly?
16
Did the the crew of Flight 1549 (that ditched in the Hudson) do an exceptionally good job?
8
Did one Avro Arrow (CF-105) avoid being scrapped?
67
Did planes crash into the WTC on 9-11?
22
Have airlines as a whole been unprofitable over their history?
8
Did two people in jetpacks fly with an A380?
39
Are 700 more planes a day expected to fly because of the Heathrow expansion?
21
Did the precedence of operations in arithmetic change since 1917?
7
Did the Catholic church prosecute Galileo because he was teaching unproven ideas?