Did 528 Hz sound broadcasts help clean polluted water in the Gulf of Mexico?

Attuned Vibrations is a vendor with articles making numerous claims about the benefits of certain audio frequencies.

On the 528 Hz – The Love Frequency page, they claim that 528 Hz sound helped clean oil from the Gulf of Mexico.

In 2010, John Hutchinson, an electromagnetic energy expert from Vancouver, B.C., Canada, helped purify poisoned water off the Gulf of Mexico following the BP oil spill. He and his research partner, Nancy Hutchinson (formerly Nancy Lazaryan), used the 528 Hz frequency and other Solfeggio tones to reduce the oil and grease in polluted water

Their results were certified by Dr. Robert Naman, President of Analytical Chemical Testing Laboratory, Inc. of Mobile, Alabama. Dr. Naman, an analytical chemist with almost 30 years in the field, tested the samples and confirmed the complete removal of oil and grease from the after treatment sample source tested.

As you can see, the amount of oil and grease “before” the frequency treatment was 7 ppm (parts per million, or milligrams per liter); while the samples that had undergone the frequency exposure measured less than 1 ppm. 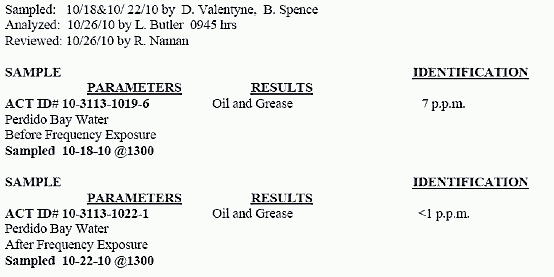 Was 528 Hz sound used to successfully clean polluted water in the Gulf of Mexico?

Because there is no associated study, peer-reviewed or otherwise, it is difficult to prove a negative. That said, extraordinary claims (a particular frequency of sound makes oil disappear) require extraordinary evidence, which is not presented. Other details of the article make it reasonably certain that this is nonsense.

Nancy Hutchinson (formerly Nancy Lazaryan), used the 528 Hz frequency and other Solfeggio tones to reduce the oil and grease in polluted water

(Emphasis mine.) The "Solfeggio frequencies" are nonsense. They're related to numerology, though not by name, in terms of trying to find some magical correspondence (aside from frequency doubling by the octave) between the Solfege notes for a scale starting at 396Hz. 528Hz is supposed to be the "Transformation and Miracles" tone.

Moreover, John Hutchinson is a well-established crackpot "inventor". That the article cites him as an "electromagnetic energy expert" is rather like citing a homeopath as a "pharmaceutical expert".

Without access to the cited demonstrative study, we cannot state definitively that this is false, but the trappings and company kept by the article strongly suggest that this is nonsense at best, and a hoax at worst.

It is important to note that what Dr. Robert Naman "certified" is just the concentration of oil and grease in each of the two samples provided. He did not in any way "certify" the relationship between those samples and the experiment.

Without any evidence of how and when those samples were taken, it does not prove anything regarding the effect of the treatment.

Also, even if the two samples had indeed been taken in the same way, at the same place and same depth, in identical weather conditions, before and after the treatment (and the 528 Hz treatment was the only thing done), unless there is a control sample to compare to, it's difficult to evaluate if the change is in any way related to the treatment. It could have been due to weather (wind or rain) or currents affecting the mass of water and giving those results independently of the described treatment.

To be at least somewhat credible, the claims would need:

I don't see any of either of those.

Finally, if you want to have a good laugh and you have time to spare, google John Hutchinson, that will give you a good idea of how much you can trust anything from him:

John Hutchison, is a well known scientist best known for examining The Bermuda Triangle, and explaining strange occurrences in this infamous area of the Atlantic ocean, called the “Hutchison-Effect,” all associated with electromagnetic disturbances of unknown origin. The Canadian Government has persecuted Hutchinson heavily over the years, the last time for supposedly causing his neighbor to levitate without consent.

This is as close as you can get from science:

Abstract of review paper from 20 years ago

To summarize it: low-frequency acoustic waves can displace oil and other substances trapped in the pores of porous media (sandstones and so on). This is a promising technique to increase production from oil fields, especially at the end of their life, near depletion.

Ignoring for a moment that it sounds perilously close to homeopathy, memory of water and correlated crap (correlation does not imply causation, crap implies crap), I see no convincing proof nor sound experimental evidence for this, so I would say "no" to your question about Gulf of Mexico, and "no" to the broad question underlying the Hutchinsons approach(1).

8
Does the sound of the Sun oscillate around 528 Hz?