Have any versions of "Who Wants to be a Millionaire?" had to remove the Ask the Audience lifeline due to the audience purposely voting wrong? 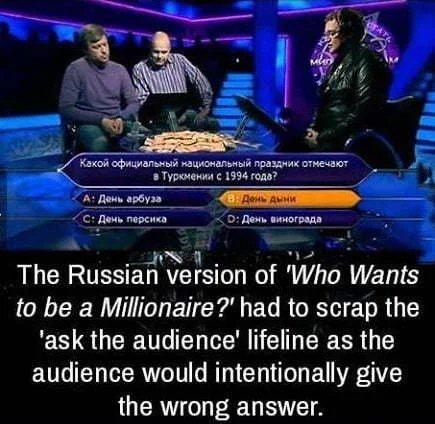 The Russian version of "Who wants to be a Millionaire?" had to scrap the "ask audience lifeline as the audience would intentionally give the wrong answer.

This image can be found (for example) on Reddit with 36k upvotes.

Is this claim true for Russian or any other version of "Who Wants to be a Millionaire"?

The Ask the Audience lifeline was removed from the show, but the reason is straightforward: they had to get rid of the audience due to COVID concerns. According to the Millionaire wiki, this change happened in all versions of the show.

I also found out that the Philippines version removed Ask the Audience in 2010 (see 2013 video), though the reason for this isn’t clear.

But there are examples where the audience appears to sabotage the contestant. For example, a contestant on the French version used Ask the Audience:

After the contestant chose his answer (the wrong one selected by the majority of the audience) and before the correct one was announced, you can hear some people laughing.

This example is cited in the book Sway: The Irresistible Pull of Irrational Behavior (section quoted in full here), which makes a number of claims about how much the audience can be trusted. It looks to be the source of the claim that Russian audiences are often untrustworthy, though they don’t explain how they determined this. They also say that the US audience gets the answer right 90% of the time.

I also found an answer on Quora from someone who said they were on the show and voted on the wrong answer on purpose, contributing to the 5% who voted for that particular wrong answer. (Interesting even if it doesn’t prove much.)

The audience does sometimes get the answer 100% unanimously wrong, though there are only a few examples of this happening, none from the Russian version. (These may not be examples of purposeful sabotage.)

Is this claim true for Russian [...] version of "Who Wants to be a Millionaire"?

Can't say for all nations, but that particular screenshot doesn't match the claim in any way.

That Reddit picture was posted on November 30, 2018 (that is long before the pandemic). And the question pictured there is the 6th question from a game on September 17th, 2011 (Google translate). The players answered that question without any hints. "Ask the audience" option was actually used in another question 11, and unfortunately the most popular answer of the audience was, indeed, wrong - that happens sometimes, and there's no indication that the audience did that on purpose. The option wasn't removed then, and it was still available in the following games: 1 2 3.

So the screenshot definitely doesn't support the claim.

And these days the "audience" option is off due to the pandemic. See the explanation in this news media article (Google translate):

But, unfortunately, these participants will not be able to use the "Help from the audience" hint, since the program is filmed without spectators in the studio in order to prevent the spread of COVID-19.

Edit: I used references to a Wiki site because they can be translated easily. I think I can find those games on Youtube, but there will be no English subtitles to prove the point.

Not the answer you're looking for? Browse other questions tagged television .

20
Was Firefly pre-targeted for cancellation by Fox executives?
13
Does "Top Gear" have 350 million viewers worldwide?
18
Did ABC News briefly report that Hillary Clinton had died in the hospital, and did ABC confirm it on the phone with Infowars?