Is there currently an epidemic of crimes against Asian Americans?

There's a common belief that we're seeing an epidemic of crimes against Asian Americans. Claims are too numerous to cite comprehensively so I'll just cite President Biden's tweet:

We can’t be silent in the face of rising violence against Asian Americans. That’s why today I’m taking additional steps to respond–including establishing an initiative at the Department of Justice to address anti-Asian crimes.

These attacks are wrong, un-American, and must stop.

The 2021 shootings at Atlanta spas are cited as a key example. However, I haven't seen any evidence that this attack was specifically targeting Asians.

More broadly I haven't seen any hard evidence of:

So are we seeing an epidemic of crimes against Asian Americans in either sense above?

Yes, there has been a verifiable increase in hate crimes against Asian Americans since the beginning of 2020, coinciding with the coronovirus pandemic.

The Center for Study of Hate & Extremism published a report documenting changes in hate crime patterns in 2020 in 16 American cities. In those 16 cities, which include most of the United States’ largest cities, anti-Asian hate crimes rose by 149% in 2020 while overall hate crimes dropped by seven percent.

In addition, surveys of Asian Americans reflect a similar increase in reported harassment:

Asian Americans reported the single biggest increase in serious incidents of online hate and harassment as racist and xenophobic slurs blaming people of Asian descent for the coronavirus pandemic spread over the past year, according to a new survey shared exclusively with USA TODAY.

Some 17% of Asian Americans reported sexual harassment, stalking, physical threats and other incidents, up from 11% last year.

It is possible to make a case that there is a significant uptick in crimes against Asian Americans (and @BradC does an excellent job). But using the same data source you can also make the opposite case depending on which statistics you choose to emphasize and how you frame the data.

Like Brad, I'll rely on the Center for the Study of Hate Crime and Extremism whitepaper since that seems to be the source for a large number of the press reports.

Yes, there was a 149% increase in reported anti-Asian hate crimes in 2020 compared to 2019 in 16 of the largest cities. But you're talking about changes in very small numbers so you'd expect relatively large percentage changes from random noise. San Diego and Cincinnati total increased from 0 to 1. Phoenix went from 2 to 3. Denver and Houston both went from 0 to 3. Chicago stayed steady at 2 both years. Washington, DC decreased from 6 to 3. Numerically, almost all the increase came from New York (3 to 28), LA (7 to 15), Boston (6 to 14), and San Jose (4 to 10). When you're dealing with single digit numbers as your baseline, you expect that you're going to have large percentage changes year over year. Any conclusions drawn from a one year increase in this data set rather than from a longer term trend are inherently suspect. If you look at, say, the graph of shark bite fatalities, 2020 saw a 400% increase in fatalities over 2019 and a 250% increase over the average year. But bites were down. We just happened to get unlucky and the fatality rate was higher.

In general, there are also data quality issues with hate crime statistics when you draw them from police (which this report does) because of vast and changing ways that police organizations code and report this data. When you look at FBI data, for example, the FBI notes that agencies provide the data voluntarily and 86% of agencies reported 0 hate crimes against anyone.

If you compare the FBI data, which is just aggregating data from various police agencies, against Bureau of Justice Statistics (BJS), derived from the National Crime Victimization Survey, the FBI reported 6,200 hate crimes in 2011 while the BJS reported 250,000+ in the same year. If police agencies are getting slightly better at coding and reporting hate crimes, you can have a large increase because agencies are counting the 98% of crimes they were omitting previously.

If you look at the FBI data from the CSHE report, an optimist could very easily draw a trend line for the entire 1996-2019 period and say "Wonderful! Hate crimes against Asian Americans are down roughly 50% over the past 23 years!" (obviously 1 hate crime is 1 too many but in a nation of hundreds of millions of people is going to have some level of crime). A pessimist could pick the low water mark in 2015 and say "Oh dear, hate crimes against Asian Americans are up roughly 50% over the past 4 years!" Both trend lines are showing something important but only one gets the headlines. 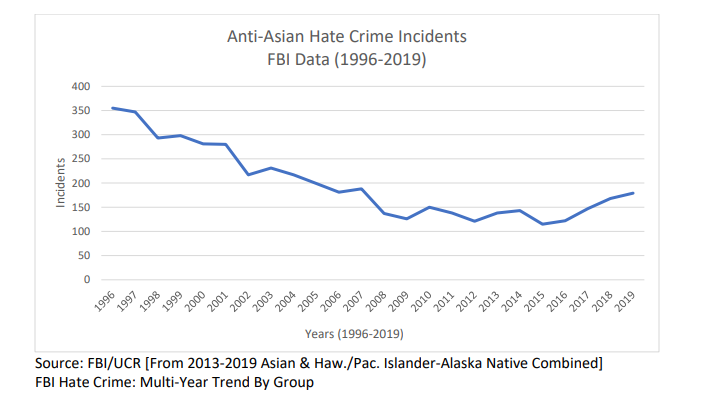 Like the overall US homicide rate, which hit a minimum of 4.4 per 100,000 in 2014 before bouncing up to 5.4 in 2016 and 5.0 in 2018 and 2019, it is important to balance the unfortunate 20% uptick in recent years against the 55% decrease since the peak in 1980. Both rates are at historic lows even though they are up from their recent minima. The 2020 rate of Asian American hate crimes will probably be consistent with the rate that was prevalent during the George W. Bush years and will probably be lower than the rate that was prevalent during the Bill Clinton years. It's not great that there has been an increase in recent years (assuming the increase doesn't merely reflect better reporting) but the Bush and Clinton years are hardly thought of today as particularly unfriendly to Asian Americans.

The CSHE report makes a similar point when it compares different time periods. Between 2014 and 2019, the FBI data shows that overall hate crimes were up 33.49% while hate crimes against Asian Americans were up only 12.86%. So Asian American hate crimes have been increasing at roughly a third the rate of all hate crimes over the past 5 years. Given that, it wouldn't be shocking if they had a larger increase between 2019 and 2020 in the absence of anything COVID related simply because of reversion to the mean. 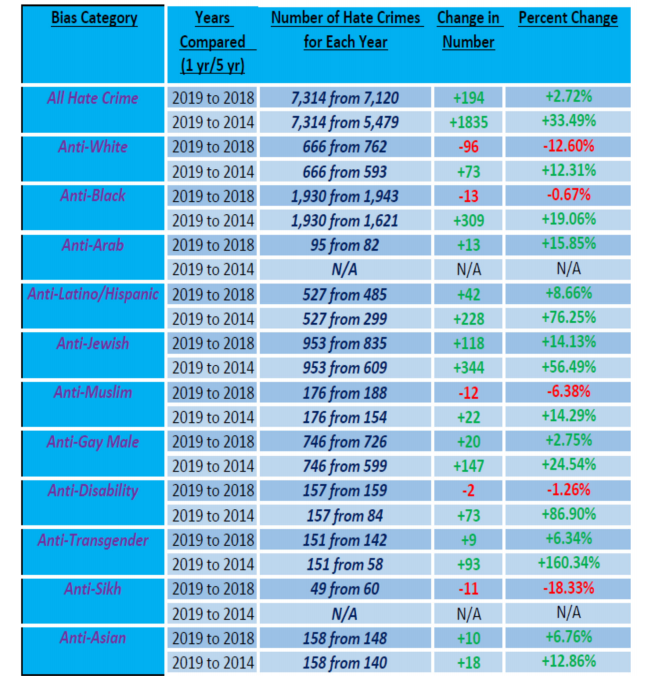 Finally, without context about what exactly constitutes a hate crime, even totally accurate and unbiased numbers can create a false impression. Most people (as @Jordy did in the comments of @BradC's answer) equate hate crimes with violent assaults. But that's largely not what we're talking about in this case. 66% of the incidents are verbal harassment. It is certainly possible that harassment is an actual criminal threat but a large number are almost certainly disgusting but nevertheless lawful speech. 20% of the incidents are classified as "shunning or avoidance". If someone is avoiding Asian Americans, they're an idiot and a bigot but they're probably not breaking any laws. 8% of the incidents are the physical assaults that most people immediately think of when they hear "hate crime" and 6% are coughing/ spitting which are also types of assaults. It is entirely accurate to count threats and anti-social behavior in the total. But unless you point out what is being included when you report the statistics, you're probably giving readers a false impression of the nature of the problem. 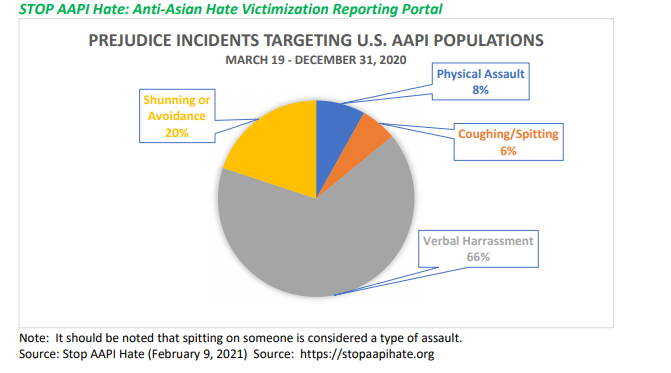 Not the answer you're looking for? Browse other questions tagged united-states discrimination .

5
Are 35% of Americans currently in collections?
38
Is there a correlation between voting for the Democratic Party and gun crimes in the USA?
52
Is there currently riots/looting *ONLY* in Democrat cities in the USA?