Is Spartacus based on true story?

The inspiration behind this series is the Thracian Gladiator Spartacus, who led a slave uprising against the Roman Republic 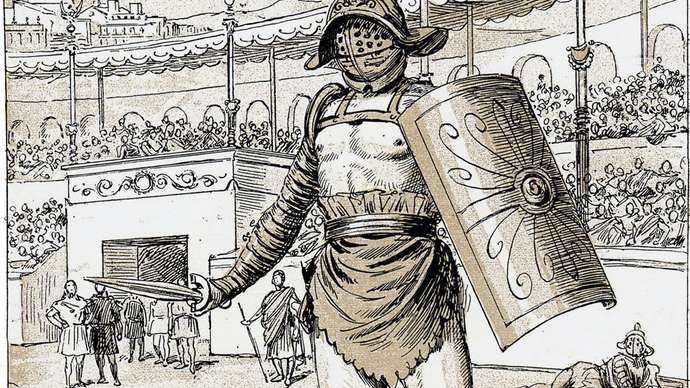 A Thracian by birth, Spartacus served in the Roman army, perhaps deserted, led bandit raids, and was caught and sold as a slave. With about 70 fellow gladiators he escaped a gladiatorial training school at Capua in 73 and took refuge on Mount Vesuvius, where other runaway slaves joined the band. After defeating two Roman forces in succession, the rebels overran most of southern Italy. Ultimately their numbers grew to at least 90,000. Spartacus defeated the two consuls for the year 72 and fought his way northward toward the Alps, hoping to be able to disperse his soldiers to their homelands once they were outside Italy. When his men refused to leave Italy, he returned to Lucania and sought to cross his forces over to Sicily but was thwarted by the new Roman commander sent against him, Marcus Licinius Crassus. Hemmed in by Crassus’s eight legions, Spartacus’s army divided. The Gauls and Germans were defeated first, and Spartacus himself ultimately fell fighting in pitched battle. Pompey’s army intercepted and killed many slaves who were escaping northward, and 6,000 prisoners were crucified by Crassus along the Appian Way.

Is Spartacus based on a true story or a fictional character in history?

According to historian "Barry Strauss" Spartacus is based upon a real historic gladiator, though the real Spartacus differs slightly from how he is portrayed in the movies that always depict Spartacus as amongst the good guys fighting for the people, when in truth they were good guys fighting for their own freedom that done a lot of bad things in the process, such as taking advantage of poor policing in the roman world and going on a rampage through Italy killing a lot of innocent people and destroying a lot of property. Historian Barry Strauss On His New Book The Spartacus War, youtube

According to a Wikipedia cross reference, Barry Strauss writes that there is no evidence that the real Spartacus wanted to abolish slavery, and freed only select individuals and seeked riches, and that ultimately, regardless of their good intentions they brought ruin and devastation to Italy.

"We do not know if Spartacus wanted to abolish slavery, but if so, he aimed low. He and his men freed only gladiators, farmers, and shepherds. They avoided urban slaves, a softer and more elite group than rural workers. They rallied slaves to the cry not only of freedom but also to the themes of nationalism, religion, revenge, and riches. Another paradox: they might have been liberators but the rebels brought ruin. They devastated southern Italy in search of food and trouble."

Spartacus fought against the Roman Republic in the Third Servile War which is considered an actual factual war which is reported by wikipedia sources to have taken place in 73 BC.

The Third Servile War, also called by Plutarch the Gladiator War and the War of Spartacus, was the last in a series of slave rebellions against the Roman Republic, known as the Servile Wars. The Third was the only one directly to threaten the Roman heartland of Italy. It was particularly alarming to Rome because its military seemed powerless to suppress it.

The revolt began in 73 BC, with the escape of around 70 slave-gladiators from a gladiator school in Capua;

Is Spartacus based on true story?

Spartacus appears to be considered a real historic figure by historians and scholars.

Wikipedia has this to say:

Spartacus (Greek: Σπάρτακος Spártakos; Latin: Spartacus; c. 111–71 BC) was a Thracian gladiator who, along with Crixus, Gannicus, Castus, and Oenomaus, was one of the escaped slave leaders in the Third Servile War, a major slave uprising against the Roman Republic. Little is known about him beyond the events of the war, and surviving historical accounts are sometimes contradictory. However, all sources agree that he was a former gladiator and an accomplished military leader.

This rebellion, interpreted by some as an example of oppressed people fighting for their freedom against a slave-owning oligarchy, has provided inspiration for many political thinkers, and has been featured in literature, television, and film.2 Although this interpretation is not specifically contradicted by classical historians, no historical account mentions that the goal was to end slavery in the Republic.

One of the references given is Plutarch's "The Life of Crassus". It talks about "the war of Spartacus". It's available on Goodreads. If you follow the other references in the Wikipedia article, there is a lot more evidence for Spartacus' existence.

16
Is Islam based on a moon worshiping cult?
11
Did Genghis Khan and his troops kill prisoners by banqueting on top of them?
30
Is the heart symbol based on female anatomy?
13
Is the novel "Sleepers" a true account?
18
Was there inscribed over the gate of Agra this story about divorce?
15
Is the 12-inch foot based off the foot of a King of England?
20
Is it true that 4th century Christians "destroyed all they could reach of ancient learning"?
57
Was the Berlin Wall Breached Based upon an Erroneous Declaration?