Was there an organized violent campaign targeting whites ("white genocide") in South Africa?

Many South African white nationalist sites claim there has been white genocide in South Africa.

Warning: These images may be disturbing as they depict graphic outcomes of violence and are NSFW. 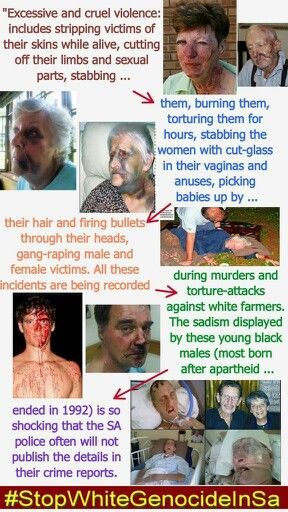 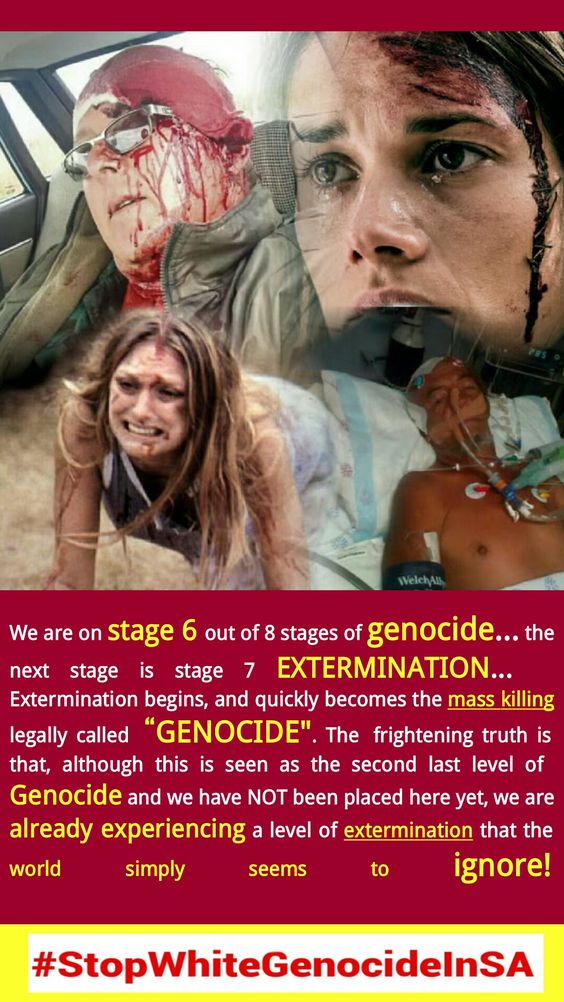 These sources are attributed to the now defunct Stop White Genocide in SA blog.

However, the article above says:

Is there evidence of an existing or past systemic violent campaign against white farmers in South Africa?

According to a fact checking group named “Africa Check”, there is no truth in the theory, and a white person is far less likely to be murdered than a black person.

“Whites are far less likely to be murdered than their black or coloured counterparts,” Lizette Lancaster, who manages the Institute for Security Studies crime and justice hub, told Africa Check. This is supported by an analysis of a national sample of 1,378 murder dockets conducted by police in 2009. In 86.9% of the cases, the victims were Africans. Whites accounted for 1.8% of the cases (although whites make up 8.85% of the population).

What Africa Check is

According to Wikipedia, Africa Check appear to be a notable and reputable fact checking organisation set up with the goal of tackling false propaganda.

Africa Check is a non-profit fact checking organisation set up in 2012 to promote accuracy in public debate and the media in Africa. The organisation's goal is to raise the quality of information available to society across the continent.

In the comments of both the question and the Africa Check answer, there was some discussion over the term "genocide". While it's true that there is not one scientifically agreed upon definition of the term, this is no cause for relativism. For one, there is the legal definition in the Genocide Convention adopted by the UN, which lists additional acts than just killing. More importantly, there are a number of scientific definitions, which we can work with. Notable genocide researcher Barbara Harff proposes the following definition in Harff (2003):

Genocides and politicides are the promotion, execution, and/or implied consent of sustained policies by governing elites or their agents—or, in the case of civil war either of the contending authorities—that are intended to destroy, in whole or part, a communal, political, or politicized ethnic group.

This focus on the perpetrating group being government or government-like is a reoccurring element in the definitions of multiple other genocide researchers.

Is there a post-Apartheid genocide in SA, and, if so, is it targeting white people?

I have not seen that claim, if we define "genocide" as above. If that claims exists, someone should source it and try to find data on it. I assign this possibility a very low prior probability.

Okay, so the claim is not about genocide. But is there an unusually high number of hate crimes targeting white people?

I could not find any data on hate crimes for SA. If anyone can, this would be a valuable addition to this answer.

In light of this, we might simplify it to murder statistics. I was not able to find reliable data on this more recent than the one cited by John Strachan, so it would not be useful for me to just echo what was already said on this.

A most tacit approximation of empirical evidence

So far, so disappointing, because I was not able to find evidence either way (though of course, absence of evidence is weak evidence of absence). As to at least have some evidence, I'm going to use the South Africa Police Service's crime statistic for 2017/2018. It shows that there were 20336 murders in that timespan. Of those, only 2332 were assigned a specific motive in the statistic (I order by frequency):

Somewhat naively, I assume that the category "political related" is the best fit for "hate crime", but I might be entirely wrong on that point. If this were true, however, it would mean that out of 20336 murders, only 32 were identified as hate crimes, that would make a strapping 0.157%. Now even if we were to assume (without any grounds whatsoever) that all of those hate crimes were committed by black people on white people because of their race, this would not in any way, shape or form indicate anything even close to a widespread phenomenon.

Now I need to stress again that what I just presented was based on utterly insufficient empirical data, to the point where it's probably a sin to even speak of empirical analysis, and thus should be taken with heaps upon heaps of salt.

Edit: As proposed in the comments, I'm going to assume the most favorable circumstances for the claim of unusually high numbers of hate crimes against white people based on their race: I'm going to assume that every murder that was committed falls into that category (I hope I don't need to point out how exceedingly ridiculous this notion is).

According to the statistic linked above, there were 17805 murders in 2014/2015 in South Africa. I use this period because according to wikipedia, there where 4,554,800 white people living in South Africa in 2014. If every single one of those murder victims had been a white person, this would mean that 0.391% of the white population would have been murdered that year. That would mean that out of a group of 1000 white people, a little less then 4 would have been murdered. Additionally, for the claim to be true, those not-quite 4 people would have needed to be murdered because they were white.

To contrast this with other causes of deaths, I looked at the official statistic for 2014, and this is what I found:
Causes of death with similar percentages are mental and behavioral disorders (0.4) and diseases of the musculoskeletal system (0.4). The only causes of death listed with an even lower percentage are skin disease (0.2), pregnancy and childbirth (0.2), and diseases of the eye or ear (0.0, respectively). Now unless we assume that an "organized violent campaign targeting whites" (question title) was less deadly than non-transmittable diseases that are usually considered non-lethal, and in fact only a little more deadly than skin diseases, I do not see any way to make that claim even remotely plausible enough to seriously entertain.

It does not seem that even far-right outlets claim a genocide according to a widespread definition of the term. If the claim is about an unusually high level of hate crimes against white people based on their race, there does not seem to be any evidence commensurate with the claim.

One of the images states:

We are on stage 6 out of 8 stages of genocide (...) the next stage is stage 7 extermination

According to Wikipedia, the 10 stages are:

Genocide Watch track the situation in various countries, and they have ranked South Africa between stage 5 and 6 (of the previous 8-stage scale) over time:

This seems to be mainly due to the rhetoric of controversial Julius Malema, then president of the ANC Youth League, who has for instance been singing Shoot the Boer. He's been convicted for hate speech several times, but he has at the same time kept his prominent position in the ANC (the leading party in SA) and received the support of ANC leaders and the president.

The African National Congress has been South Africa’s governing party since the Presidency of Nelson Mandela 17 years ago, following the end of white minority rule and apartheid. In the years under apartheid, hate speech was used by both supporters and opponents of the apartheid system to stir up their followers. When racial tensions in South Africa ran high, the song “Kill the Farmer, Shoot the Boer” was a revolutionary song of the anti-apartheid movement. However, it is an illustration of the long-term impact that such de-humanizing language can have.

Over 3000 white farmers have been murdered since 1994. The South African police have not made investigation and prosecution of these farm murders a priority, dismissing them as crimes by common criminals. The government has disbanded the commando units of white farmers that once protected their farms, and has passed laws to confiscate the farmers’ weapons. Disarmament of a targeted group is one of the surest early warning signs of future genocidal killings.

A recent outbreak of violent farm invasions has led to casualties among white South Africans. The farm invasions are direct results of calls by Julius Malema and his Deputy, Ronald Lamola for whites to give up their land without compensation, or face violence by angry black youths “flooding their farms.” In response to Julius Malema, the Freedom Front (FF) cited Section 16.2c of the South African Constitution, which restricts freedom of speech rights by excluding as unprotected speech "advocacy of hatred based on race, ethnicity, gender or religion and incitement to cause harm.” The FF contended that Malema’s singing of the “Shoot the Boer” song was hate speech and therefore a human rights violation. Acting Judge of the South Gauteng High Court, Leon Halgryn declared that the song is hate speech, and it is unconstitutional to either utter or sing “dubul’ibhunu” (“shoot the Boer.”) He issued an injunction against Malema, ordering him to no longer sing the song. The phrase is now considered hate speech.

Julius Malema was shortly thereafter removed as President of the ANC Youth League, and ejected from the ANC. However, Malema’s followers have defied the judgment and continue to sing the song. Even President Jacob Zuma sang “Shoot the Boer” at the ANC Centenary Celebration event in January of 2012. He claimed that its use at the ANC Centenary was not intended as hate speech, but rather to commemorate the struggle against apartheid.

Despite President Zuma’s proclaimed intent, his singing of the song may be contributing to an increasingly hostile environment that threatens the safety of white South Africans. The number of murders of Boer farmers has increased each month in 2012.

For ten years, Genocide Watch has been the only international human rights group willing to declare an Alert about the high murder rate of Boer farmers, perhaps because it is not “politically correct” to defend the rights of people who once supported apartheid. Genocide Watch is opposed to all forms of racism, from whatever the source. The President of Genocide Watch actively supported the anti-apartheid movement in constitutional consultations with the United Democratic Front when he was a Fulbright Professor of Law in Swaziland. He has visited South Africa several times since and will soon visit again.

There is no more recent update on the classification of SA by Genocide Watch since 2012, but their current evaluation is that the following stages are in effect:

An improved answer to the one before:

Yes, there have been allegedly organized targeted attacks on white farmers.

No. It isn't genocide. As @GlenO puts it beautifully:

To be considered genocide deaths not only have to be organized and deliberate, they have to be a certain scale. Even if a few people go round deliberately targeting white farmers because of their race, if only a few are killed it is not a genocide.

Not the answer you're looking for? Browse other questions tagged south-africa genocide .