Does this picture show an Arizona fire department extinguishing a fire in Mexico?

This was posted by the Swiss news portal watson.ch: 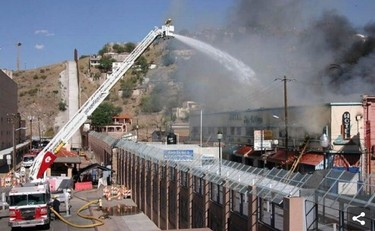 Yes. At Nogales, Arizona, in 2012, according to this story, found using Google Image Search:

Nogales, Arizona, firefighters rushed to the international border with Mexico at Morley Avenue after a blaze broke out at the Hotel San Enrique in Nogales, Sonora, Mexico. The hotel had been a lodging for migrants waiting to cross illegally into the United States.

The building was empty at the time of the fire and no injuries were reported. About 10 firetrucks responded from the Mexican side of the fence, while Nogales Fire Chief Hector Robles dispatched the local department's $827,000 ladder truck for its maiden trip to an actual fire.

December 17, 2018 at 10:08 PM MST - Updated December 17 at 10:08 PM NOGALES, AZ (Tucson News Now) - A 20-foot high fence with mesh and razor wire divides sister cites Nogales, Sonora, Mexico and Nogales, AZ. It’s a border, but it doesn’t stop the relationship between both fire departments along the border. A relationship that came in handy during a fire this past weekend.

On Friday, Dec. 14 firefighters in Nogales, Arizona saw smoke. They called it in, thinking the fire was on the American side. Crews arrived and discovered the fire was actually on the Mexican side of the border. There was an issue though for the firefighters in Mexico, they didn’t have water flowing to the hydrants.

The firefighters from Arizona acted fast and helped out their counterparts across the border. They hooked up a hose to a hydrant. Ran the hose to the fence, and there crews ran into another issue. The mesh fence that is about 7-feet high with sharp edges. The edges could cut the hose.

One of the captains decided to lay a ladder on the mesh fence. So the hose would not get damaged and it worked. They tossed the hose to the firefighters in Mexico and they were able to put water on the fire.

It took the firefighters several hours to put the fire out, but out of the three homes that were burned, only one was destroyed.

Tucson News Now spoke with the fire Chief of the Mexican fire department about the two departments working together. He says the two have been helping out each other for years.

Not the answer you're looking for? Browse other questions tagged fire mexican-border-wall .

15
Fighting fire with electricity. Plausible?
11
Can overheating laptops cause fire?
4
Did a firefighter rescue a cat from a still-burning house?
17
Was the "Worst Twerk Fail EVER - Girl Catches Fire!" video staged?
6
Is Mexico building a southern border wall that the United States is helping to pay for?
4
Has Trump authorized the construction of 115 miles of border wall?
74
Do wooden building fires get hotter than 600°C?
0
Does this video show the Notre Dame fire being deliberately lit?
10
Does having your bedroom door closed while sleeping improve fire safety?