Is it dangerous to use a gas range for heating?

According to the CDC, you should "NEVER use a gas range for heating".

Is this valid advice though? Is there any evidence that a gas range not used for cooking is a danger to the household when only burning gas with an open flame? If so, how many hours of use is required for this danger to manifest?

Using a stove hood with a fan vented to the outdoors greatly reduces exposure to pollutants during cooking. Improper adjustment, often indicated by a persistent yellow-tipped flame, causes increased pollutant emissions. Ask your gas company to adjust the burner so that the flame tip is blue. If you purchase a new gas stove or range, consider buying one with pilot less ignition because it does not have a pilot light that burns continuously. Never use a gas stove to heat your home. Always make certain the flue in your gas fireplace is open when the fireplace is in use.

Yes, because the safety systems that are required for furnaces and water heaters are not standard on stoves and ovens.

Even with these two systems in place, CO detectors are still required, and odors are added to natural gas to make leaks detectable.

By contrast, a natural gas-burning stove or oven has neither of these safety measures (some newer models may have flame sensors*, but most existing ones don't). If the flame goes out the gas keeps coming, and the combustion gases are released directly into the living space. An exhaust hood will remove the combustion gases, but also most of the heat.

If you are using the oven/stove as intended, you are likely in the kitchen where you will be able to smell the natural gas, or see that that flame is yellow and/or smoking, an indication of the incomplete combustion that can generate CO. You will also not be using the appliance for several hours every day (or if you are, you are likely using an exhaust hood).

*In the U.S. and Canada, CSA/ANSI Z21.1-2018/CSA 1.1-2018 is the standard for "household cooking gas appliances". If someone has institutional access they could check if flame sensors are required, but this would be a recent change.

In the US, deaths due to CO from "Gas Ranges/Ovens" were:

Also, death can occur due to using up too much of the oxygen in the combustion, as explained in Mother and 2 Infants Found Dead, and Use of Stove for Heating Is Implicated New York Times 10 January 1998.

While it looks simple to the naked eye, combustion is a ridiculous chemical mess:

A detailed kinetic model of propane ignition and combustion in air is developed. The model includes 599 reactions with 92 species and invol ves both the high-temperatureand low-temperature mechanisms of oxidation.

This is expected as combustion of a hydrocarbon molecule does not occur instantly. When say, a propane molecule (C3H8) bumps into an O2 molecule, if they're not hot enough (ie, fast enough) to provide the activation energy required to initiate the reaction they will just bounce off each other and nothing happens. If the activation energy is available however, either from the molecules themselves or with the help of a bystander like a free radical or a catalyst, then the reaction starts. What happens depend on how the molecules collide, which means there are many possible combinations, and every step from "C3H8 + nO2" to "CO2 + H2O" is its own reaction with its own kinetics. 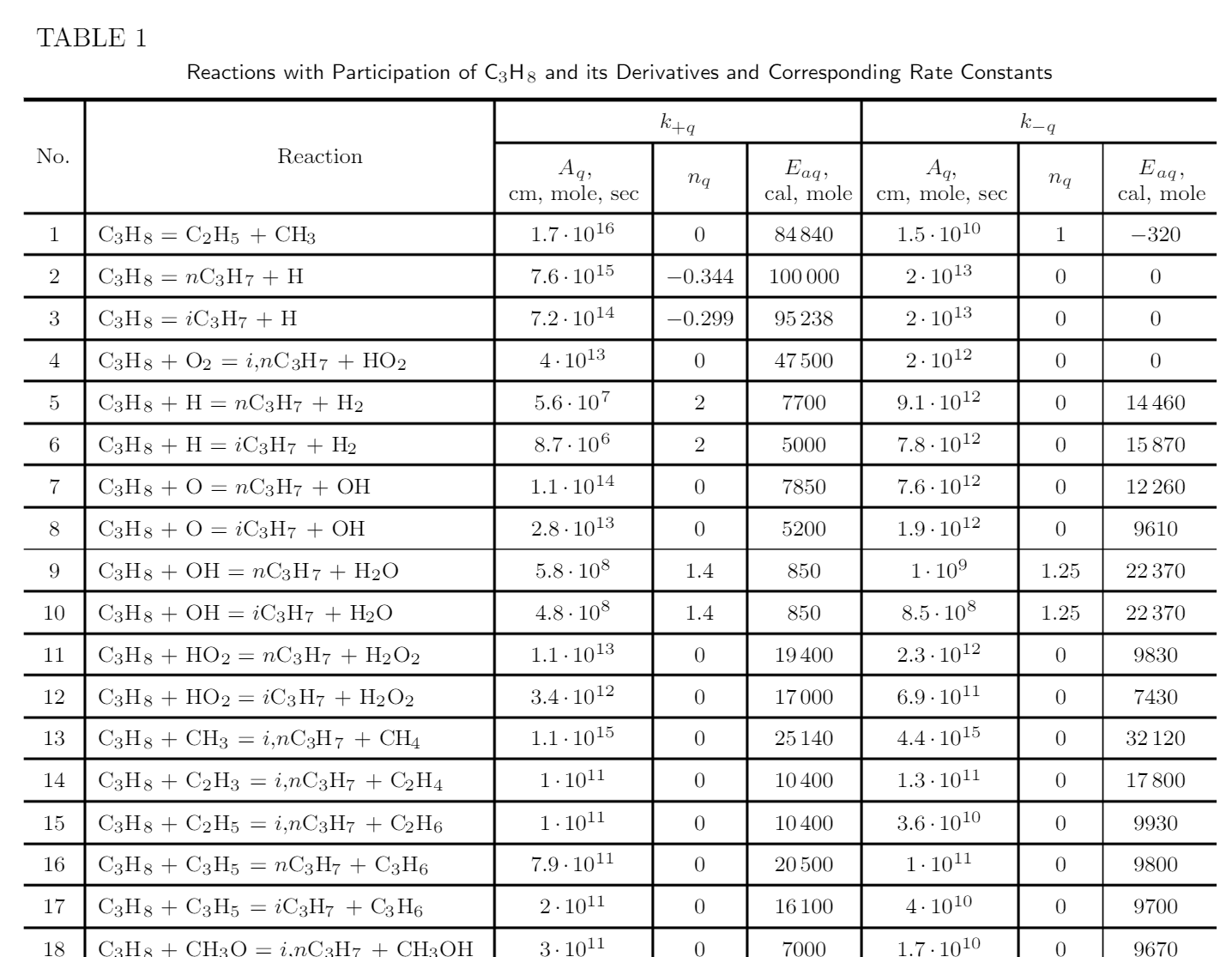 So you may ask "what is HO2 isn't is supposed to be H2O", well when molecules get whacked inside a flame with lots of free radicals in the vicinity they will rearrange in all sorts of ways, leading to intermediary products that are more or less stable (HO2 would be of the "less stable" variety since it's a free radical) which then react with whatever they can find, towards the final products of the reaction.

From the point of view of breathing humans, problems occur when the flame lacks enough oxygen to allow all the intermediary products to combust into CO2 and H2O. But this can also occur if the flame hits a cold object, like the bottom of a kitchen pot. This robs the gas molecules of their energy and prevents many reactions from occuring. The most unstable products will still react and end up decomposed into CO2 and H2O, but more stable molecules like CO will not react further with oxygen if the temperature is too cold.

I've dug up this old paper which contains lots of useful measurements.

Summary: burning gas in air generates a lot of carbon monoxide (CO) which then, under normal conditions, also reacts with oxygen and burns, producing CO2. However:

In a gas oven, you usually don't see the flame, so there is no way to visually check for this. Besides, the flame will be running against the sheet metal at the bottom of the oven, so it could be cooled by contact with the metal and produce lots of CO. In fact an oven combines both ways to produce CO: insufficient airflow due to dust plugging the vents, and flame being cooled on contact with metal. So I'd say chemistry agrees with CDC advice. There is definitely a risk of CO poisoning.

According to these papers, using a gas range for heating would probably not generate enough CO to cause problems, but it still is a very bad idea to use that as heating for many other reasons that have nothing to do with CO. If this is an emergency situation in the winter, people will probably plug up the ventilation and turn the room into an airtight container in an attempt to stay warm, which means excess CO2 or oxygen depletion are possible.

Also, as the second paper mentions, if you do a really good job of making the room airtight, when enough oxygen is consumed and concentration drops below about 15%, which is still breathable, combustion will stop and gas will be released into the room directly. That would displace the air and people would asphyxiate. Explosion would only occur when enough oxygen is brought back in, for example by opening the door while trying to get out. But it could also occur if, for example, the oven flame goes out first due to lack of oxygen, and there is no flame detector to turn off the gas, and the burners on the top of the stove are still burning due to having access to more oxygen.

Excess CO2 will also kill you, of course, but unless you're fast asleep you will feel it coming.

Besides, burning gas releases water vapour in the air, which will condense on the walls and ruin them, cause mold to grow, etc.

So, even if the advice is technically somewhat wrong about blaming only CO, it's still good advice. If fear of carbon monoxide prevents people from succumbing to good old asphyxiation and/or explosion, in a blackout situation where 911 isn't answering the calls, that's good enough.

The CDC and the EPA are generally correct. However, they say "never."

In a place that is not sealed against external air or has adequate ventilation, you can use an unvented gas heater. There are camping heaters for this purpose.

When I was a graduate student and for some time afterwards, I lived in a drafty old house that was heated with old gas space heaters. Because there was outside air coming in they were fairly safe. I had no need to use the gas stove for heat because whatever heat these primitive units produced eventually made its way to the kitchen and was vented up into the attic.

In a later house, we sometimes used the gas stove for heat, because it didn't have any other heat. This was in Texas. The house had 4 bedrooms, 3 poorly sealed outside doors, and one could feel cold outside air coming in around the windows and through the electrical outlets. Otherwise, what it needed, except a few days a year, was cooling, not heating. A girlfriend ruined the gas oven by turning it on for heat and leaving the door open, which of course blew the thermostat.

I don't intend to contradict any of the other answers, which are correct, only to suggest that not every rule, even from the CDC and the EPA, applies 100% of the time.

Gas ranges are dangerous even for cooking!

(Other risks like fire, explosion or CO poisoning are also easilly found to be higher from numerous sources.)

Gas heaters for use without dedicated ventilation do exist, but they have flame-out protection, low oxygen protection, topple protection and are built with less attentive use in mind. Most of them are catalytic, meaning no free flame and low CO as well.

On the other hand, the only safety feature in a gas stove I have ever seen is a flame-out protection. Good, but not enough to sleep around it.

Not the answer you're looking for? Browse other questions tagged united-states safety .

14
Is fluoride toothpaste dangerous?
13
Is Mephedrone as dangerous as UK government advice claims?
5
Is it dangerous to stand or squat on a toilet seat?
11
Is inhaling helium dangerous?
21
Are sharp knives safer to use than dull knives for preparing food when cooking?
10
Is it dangerous to run with scissors?
60
Is it less dangerous to box without gloves than with gloves?
23
Are roads more dangerous when it first rains?