From The Independent, "Why on earth would right-wing people with connections to the fossil fuel industry lie about ‘frozen wind turbines’ in Texas?"

This article seems to make it sound like Wind and Solar outperformed and fossil fuels under performed during the crises. Is this true?

TL;DR: On 2/15 both solar and wind exceeded the short term forecasts which do not account for local operating conditions. The operational wind forecast was about 60% low for the whole day, seemingly due to a conservative application of the icing derate built into the forecast. The operational solar forecast was about 20% high, because ERCOT does not forecast solar for when the grid is under extreme/contingency conditions.

What does "forecast" mean in this context? Obviously solar and wind are weather-dependent resources, which is the most significant factor in the forecast amounts. However, the operational forecast also accounts for technical problems and unexpected shutdowns -- things beyond just wind and sunshine availability (in the short term forecast). Due to it's relatively low capacity statewide, solar forecasts are not included in contingency planning, so was not updated during the event. For wind, since the storm was already factored into the forecast, the fact that it exceeded this forecast indicates that it experienced less technical challenges than expected. Ultimately this says at least as much about the forecast methodology as it does about the capabilities of wind turbines in Texas.

What caused the blackouts? This is still being investigated in detail, but the most significant factors appear to be that load and outages were both under-estimated. Wind out-performed contingency expectations. Outage estimates do not include solar.

ERCOT, the grid operator covering most of Texas, provides a number of detailed generation reports for all resources on the Texas grid, including hourly values for forecast and actual production from wind and solar resources. The data is updated every hour with data for the previous 48 hours. The files give raw data, which I've plotted and explained below: 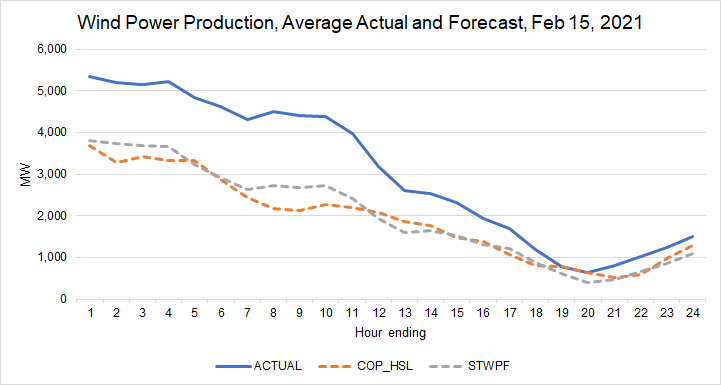 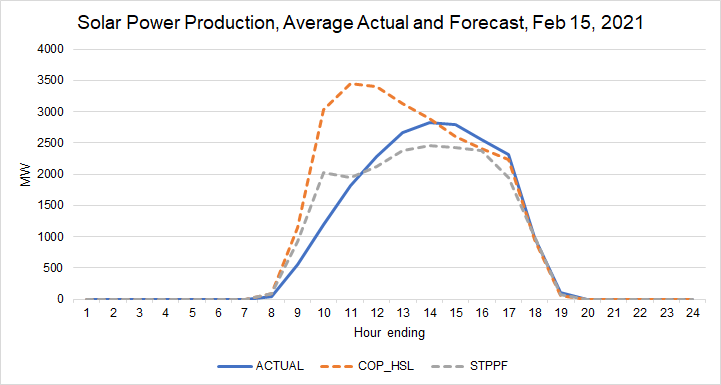 From the ERCOT glossary with some other sources noted.

The forecasting process documentation indicates that the short term forecasts are generated internally by ERCOT and provided to the QSEs (qualified scheduling entities -- whoever operates and gets paid for each generation resource on the grid) who use it to generate the "operational forecast" -- the COP HSL.

The wind forecast process includes two different derating factors for extreme weather, which specifically accounts for the probability that turbines will be off-line due to icing. The solar forecast accounts for weather, but does not appear to account for snow accumulation on panels.

Wind. Without additional commentary from ERCOT, it would appear that ERCOT forecasters and wind operators were somewhat conservative in their application of the extreme weather derates when they updated their output forecasts, and the actual production ended up greatly exceeding both forecast metrics. There is no comprehensive comparison of actual to forecast values that I could find, but spot-checking a few other days indicates that actual values tend to be within +15% or so of the forecast, which is what we could expect given the definition of the forecast.

Solar. In this case, it looks like ERCOT accounted for snow accumulation in derating their forecast, which came in slightly less than the actual production. However (and I'm speculating here) since the forecast procedure does not appear to account for snow accumulation, the PV operators did not adequately derate their forecasts. This would appear to indicate a shortcoming in the process, as the operating plans, by definition, should not exceed the short term forecast.

So what caused the rolling blackouts?

Obviously there will be a detailed postmortem of this, but we can say that wind and solar were certainly not the most significant factor. The blue line on this real time plot shows available standard capacity (excluding the operating reserves which are dispatched to respond to acute failures) minus actual load -- any time that blue line goes below zero, there are problems. Here's the plot for February 15, showing the value at the low point at 5:13pm: 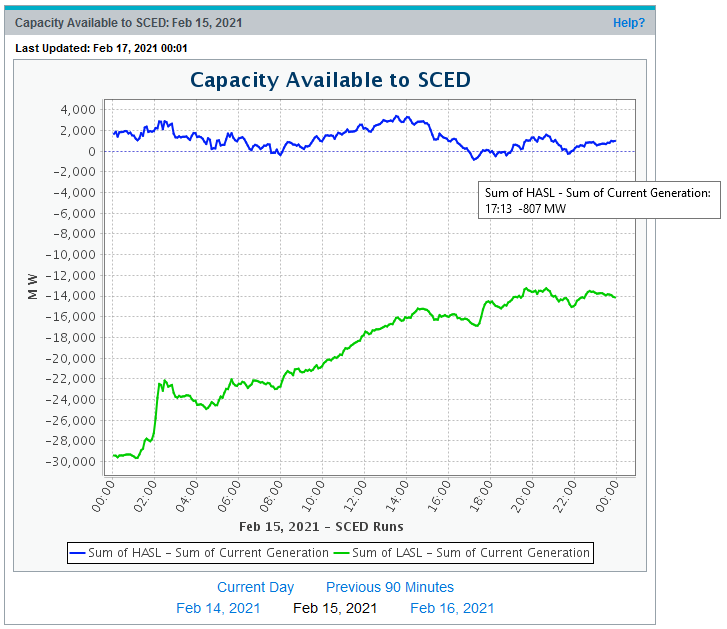 ERCOT forecasts load and non-dispatchable generation (wind and solar) on a number of timescales to predict how much energy will be needed on a day-ahead and hour-ahead basis, and then sets prices using the operating reserve demand curve. This curve dictates the price per MWh that is paid on the market, and increases as capacity becomes constrained. The maximum is fixed at $9,000 per MWh, which is considered the VOLL -- value of lost load. At some point generating power is too expensive, and blackouts are cheaper. ERCOT has decided that $9,000 is the price at which this occurs. The intent of the system is to incentivize more capacity to become available as that price goes higher, to ensure that blue line stays at a sufficient height above zero.

On February 15, the prices hit $9,000 throughout the day, and yet rolling blackouts were required to keep the system from collapsing. This means that one of three things went wrong:

1. The load forecast was too low, meaning more capacity was needed than expected?

Energy consulting firm ICF did an analysis of ERCOT's various long term forecasts for the winter and produced this table:

This shows that the load under extreme conditions was underestimated by 7.3 GW, or about 13% of normal load.

2. The solar and wind forecast was too low, meaning less capacity was available than expected?

As discussed above, the wind forecast accounted for the storm, and the solar forecast appeared to correct itself partway through the day. These forecasts ended up being overly conservative -- the system expected to have less wind and solar available than were actually present.

3. The VOLL is too low, and generators didn't have sufficient incentive to stay on-line?

Obviously, generators wouldn't have waited until February 14 to see the price, and then make infrastructure changes so they can produce power the following day despite the cold. The market design is supposed to entice them with the allure of high prices to be prepared well in advance, spending some money up-front so they can be prepared to take advantage of price spikes. Given that there were no outages in far colder parts of the country, it's clear that the technology needed to stay online during such storms is available and cost-effective. So if the VOLL had been higher, perhaps they would have planned ahead and done this? Especially since something similar had happened in 2011?

Technically yes, but not in the way you may think.

Here's the data for all electricity generation in the ERCOT grid: 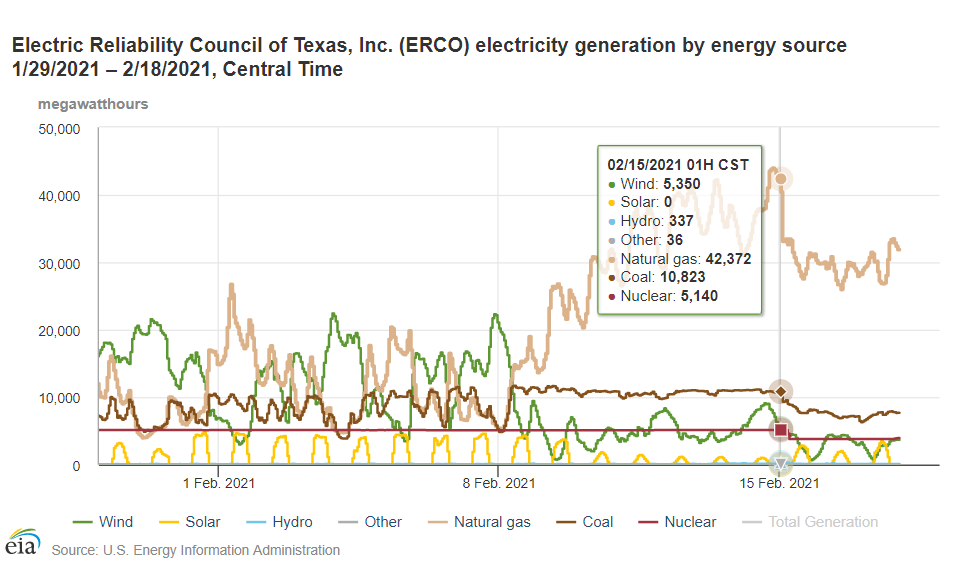 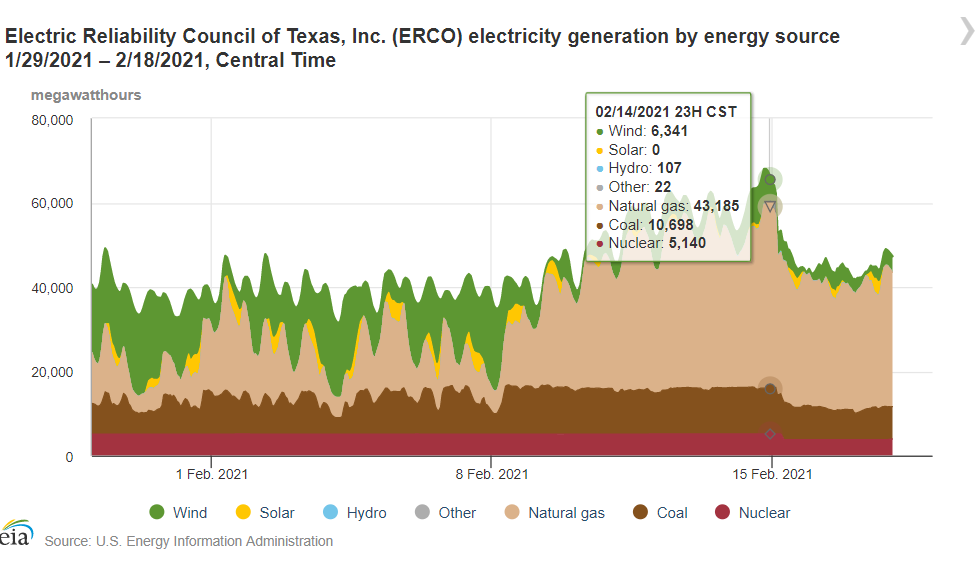 The cold front started coming in on the night of the 8th and you can see how wind generation immediately started experiencing major problems and fell drastically, but the other sources started generating more to pick up the slack and also the increased demand from people needing heat. It got steadily colder and colder, until, by the 15th, it was cold enough for water to freeze in pipes and on various sensors and all three other major power sources simultaneously started experiencing major issues. Not as bad as wind, even with the drops, coal was at baseline, gas still 2X above and nuclear only 25% down, but it was not enough for the increased demand.

Now both sides are twisting the facts to their own advantage. One side is saying that wind "outperformed expectations", technically it did outperform the forecast for the day, but only because the forecast had already taken all the off-line capacity into account. It's like having one member of your relay team break a leg during a race, but say: "Look how fast he hopped his part". And the other side is trying to blame it all on wind, when a casual glance at the data shows that the fall in other sources on the 15th was more than total wind generation before the 8th.

I downloaded the last uploaded files for 2/16 for both wind and solar production, and below is the data in there for Monday 2/15. Those files have a bunch of columns, but I only included the relevant ones below:

Not the answer you're looking for? Browse other questions tagged power-generation wind-power .

52
During Great Britain's coal-free day, were coal plants shut off, or active and generating power GB didn't use?
42
Did wind power supply less than half a percent of global energy in 2014?
16
Did the wind power industry produce more radioactive waste than nuclear power plants?