Do windmills in freezing climates require power so they don't seize up?

Germany's millions of solar panels are blanketed in snow and ice... (not working)... It's 30,000 Wind Turbines are not turning in the Freezing Windless Weather.... Actually...... they need a constant INPUT of electricity from the grid so they dont freeze up & chew up their internal workings...... COAL plants to the RESCUE....! 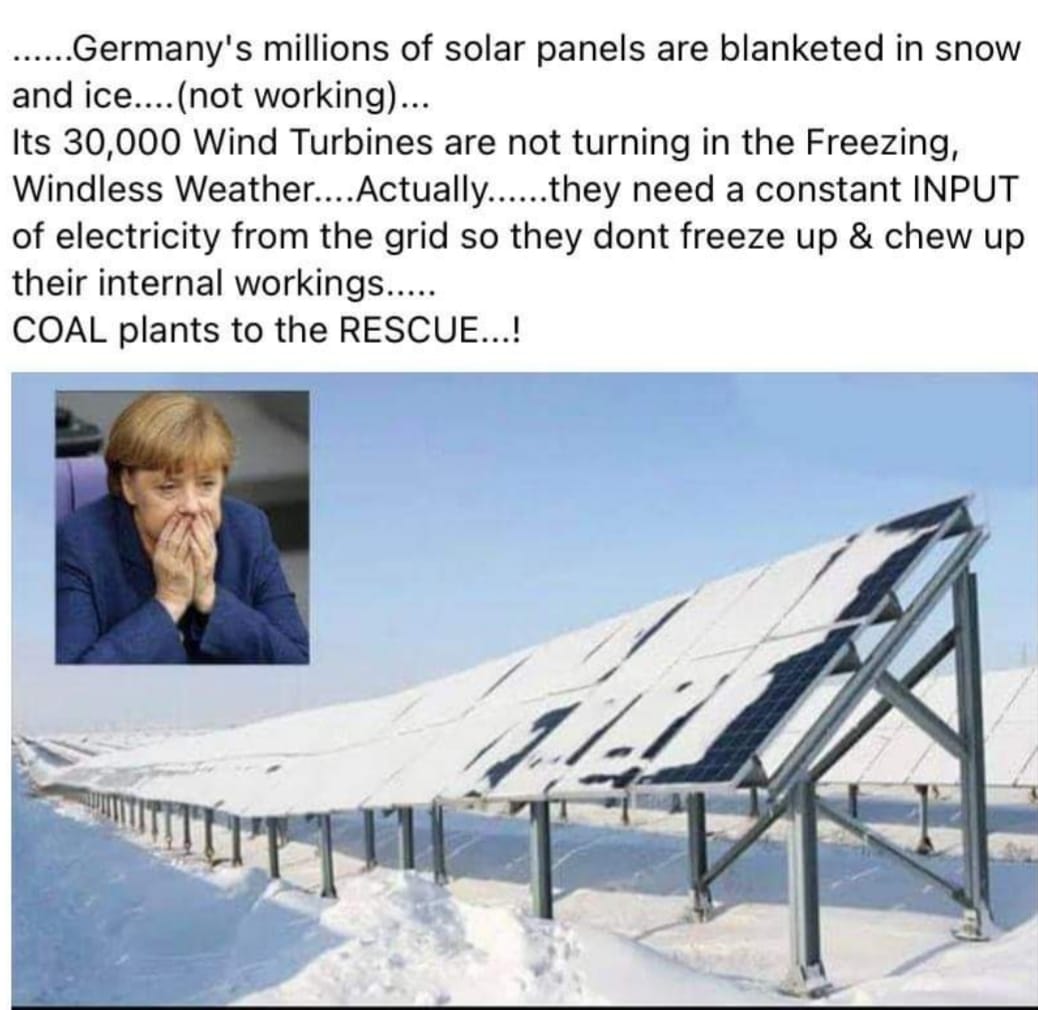 Is this claim correct? Do windmills actually need some kind of defrosting mechanism.

It seems this claim originates on ZeroHedge's article, "Achtung Baby! (It's Cold Outside) – Germany's "Green" Energy Fail Rescued By Coal And Gas ",

Its millions of solar panels are blanketed in snow and ice and breathless, freezing weather is encouraging its 30,000 wind turbines to do absolutely nothing, at all. [Note: don’t forget about the constant supply of electricity from the grid that these things chew up heating their internal workings so they don’t freeze up solid!]

Yes, but it's a small fraction of what they produce.

Wind turbines need measures to deal with cold and ice. Heating is one of them.

Canada address the problem in Wind Energy in Cold Climates.

Based on actual measurements, icing can occur up to 20% of the time between the months of November and April. Wind turbines must therefore be able to sustain at least limited icing without incurring damage that would prevent normal operation.

Wind turbine manufacturers are increasingly recognizing the impacts of cold climate operation and are building turbines better equipped to handle winter conditions. With the installation of “cold weather packages” which provide heating to turbine components such as the gearbox, yaw and pitch motors and battery, some turbines can operate in temperatures down to -30C.

Various types of rotor blade de-icing and anti-icing mechanisms, such as heating and water-resistant coatings are currently being employed, as well as operational strategies to limit ice accumulation.

However, the loses are minimal.

While severe icing events at particular wind farms can create headlines, one aspect that is not readily apparent is the overall impact of cold climate on energy generation in the Canadian wind fleet. There is a need to gain a better appreciation of the scale of the problem, so that research and development efforts can be strategically directed towards mitigating such losses.

...[CanmetENERGY-Ottawa] analyzed production data from 23 wind farms across eight Canadian provinces with the objective of quantifying the degree to which cold climate operation affects wind energy production in Canada. Over the six year study period from May 2010 – April 2016, the average loss factor for the summer period from May to October was estimated to be 4.2%, compared to 8.1% for the winter period from November to April, resulting in an average cold climate loss factor of 3.9%. Cold climate losses were estimated to total 959 GWh across the country each year, representing lost revenue of $113 million annually.

An interview with EDP Renewables, who operates in parts of the US which see harsh winters, has this to say about how they operate in cold climates.

“There are a variety of cold weather and anti-icing technologies that are used on wind turbines in the coldest regions,” [Amy Kurt, senior manager of regional government affairs for EDP] said. “These technologies help prevent the buildup of ice on turbine blades, detect ice when it cannot be prevented, and remove ice safely when it is detected.”

Ice clinging to the blades of a wind turbine poses big problems. It adds weight and can throw the spinning blades out of balance, potentially damaging vital gear mechanisms. It also can change the aerodynamics of the blades, preventing the wind from making them spin.

Kurt said EDP’s turbines are equipped with sensors that detect ice by sensing the imbalance the ice causes.

“When there’s an imbalance, we know something is not right,” she said.

The sensors can even tell which blades have ice on them and which ones don’t. When ice is detected, heating elements inside the blades turn on to melt the ice.

For safety reasons, the turbines are shut down while the heating elements melt off the ice, Kurt said. That way, there’s no chance of ice flying off spinning blades, potentially damaging the turbines or, worse, striking someone on the ground, she said.

“We’d rather the ice drop below the turbine,” she said.

Once the ice is removed, the turbines are turned back on and the blades can safely spin in the wind again.

They automatically detect an ice buildup, stop the turbine, turn on the heater, wait for the ice to fall off, then continue operations.

Germany gets wind and solar power in the winter.

From the breathless claim you'd think the White Walkers have arrived and every solar panel and wind turbine is frozen solid.

A quick look at daily power production for 2020 from Agora Energiewende shows that's not true. There's plenty of renewable power all year. More wind in winter, more solar in summer. Non-renewable power makes up the difference. 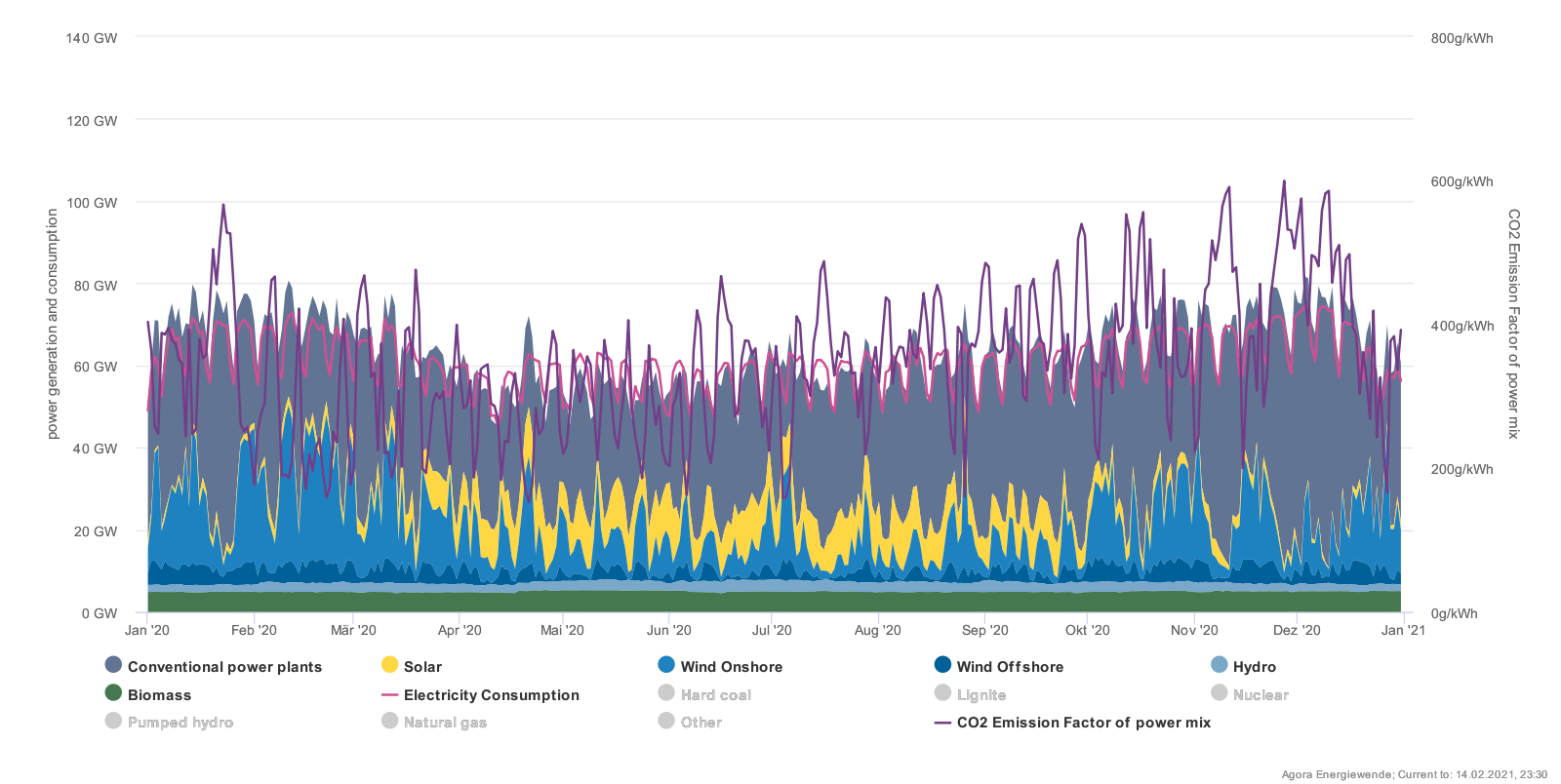 The Germans didn't forget about winter.

This is one of those sophmoric "gotcha!" claims which supposes the experts somehow missed something extremely obvious, like winter, and it's up to Some Person On The Internet to point this out. "What about winter?! Checkmate, renewables!" As if the German energy industry looked out the window and said, "wow, what's this fluffy ice falling from the sky?! Ich verstehe nicht! Didn't it do this last year, too? Oh no, it's covering our solar panels!"

Yes, they have a plan for winter.

More likely is the person making the image is oversimplifying to push their point which is...

"COAL plants to the RESCUE"

The whole point of making these claims is the idea that renewables can't be relied upon, therefore we must use the author's preferred energy source.

"Therefore coal" or "Therefore we can't use renewables" is a simple dichotomy fallacy which supposes that we must go 100% renewable right now. Germany is undergoing an Energiewende, an Energy Transition. The energy mix in Germany is quite diverse made up of coal (30%), wind (25%), nuclear (14%), natural gas (10%), solar (9%), biomass (9%), and hydro (4%) with gas, solar, wind, and biomass growing rapidly and coal falling.

Uncertainty in wind and solar energy production is a well known problem with various solutions. Germany is taking multiple approaches including storage, increasing efficiency and reducing demand, and greater integration.

As transitional technologies low-CO2 natural gas power stations and the most modern existing coal-fired power stations have an important function, especially combined heat and power generation that is geared to the electricity market and can be ramped up or down flexibly depending on the availability of electricity from solar or wind power at any given moment.

Yes, coal plants to the rescue, but not more coal.

Not the answer you're looking for? Browse other questions tagged environment energy .