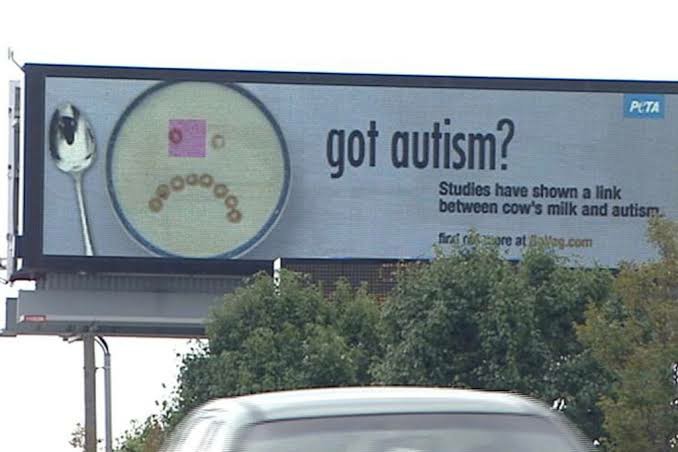 People for the Ethical Treatment of Animals (PETA) are saying

Studies have shown a link between cow's milk and autism.

More research is needed, but scientific studies have shown that many autistic kids improve dramatically when put on a diet free of dairy “products”. One study of 20 children found a major reduction in autistic behavior in kids who were put on a casein-free diet (casein is a component of cow’s milk). And another study done by researchers at the University of Rome showed a “marked improvement” in the behavior of autistic children who were taken off dairy products.

The reason why dairy “products” may worsen autism is being debated. Some suggest that the gastrointestinal problems so often caused by dairy products cause distress and thus worsen behavior in children with autism.

Regardless of the cause, testimonials show that many people with this condition may be able to find relief with a simple dietary change—removing milk from their diet.

Now the word "autism" has been removed from the article and they seem to have backed away:

A recently resurfaced PETA ad, more than a decade old and long since removed, was based on a study that had come out at that time and was created in response to the milk industry’s harmful “Got Milk?” campaign, which duped parents into believing that cow’s milk is a healthy drink rather than one linked to asthma, constipation, recurrent ear infections, iron deficiency, anemia, and even cancer (PETA).

Are there studies that link autism to cow's milk?

23
Are there any other studies (besides the discredited Wakefield studies) that have found a link between vaccination and autism?
8
Are there large scale studies investigating relationship between IQ and autism spectrum disorders (especially Aspergers)?
14
Is casein from cow's milk harmful to humans over one year of age?
9
Is there any difference between milk from rBST treated cows and non-rBST treated cows?
14
Does drinking cow's milk make children grow taller?
6
Does this study show the CDC has covered up an autism/thimerosal link?
4
Is there correlation between vaccination rates and autism diagnosis?
17
Does a dairy-free diet reduce autistic behaviour?