Are foreign governments receiving $4.7 billion as a result of the U.S. covid stimulus package?

This image and claim has been making the rounds on Twitter, having been shared by Candace Owens and others, listing the supposed pork barrel spending included in the stimulus package passed by U.S. congress in December 2020: 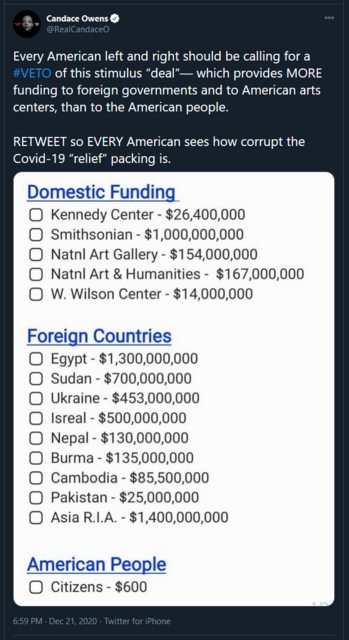 Every American left and right should be calling for a #VETO of this stimulus â€śdealâ€ťâ€” which provides MORE funding to foreign governments and to American arts centers, than to the American people.

RETWEET so EVERY American sees how corrupt the Covid-19 â€śreliefâ€ť packing is.

The text of the bill would seem to support this for at least some of these countries. For example:

Is it true that foreign governments are receiving billions of dollars of stimulus funding from this bill? Or is there something else to explain what's actually going on here?

TLDR: the appropriations bill for 2021 has a Covid stimulus attached to it. (Conceivably, the stimulus could have been a separate law as in the prior CARES act, but for intricate reasons of politicking, this stimulus was put in a "single legislative vehicle" with the rest of the normal years-end appropriations.) The FB post (and now Trump) have exploited this combo packaging to contrast and complain about the relative size of various spendings. Counter-critics have pointed out that many of those things Trump now complains about were actually in the budget request sent by the White House, sometimes in nearly identical amounts. Likewise the House of Representatives has now (at least formally) attempted to "fix" the problem highlighted by raising the Covid-relief check amount and cutting foreign spending... although the trouble with that is that House Democrats only want to do the former and (most) House Republicans only want to do the latter. (The size of the stimulus checks in the current law was itself bound from above by Senate Republicans who would have preferred a lower topline of $500 billion in relief; the $900 bilion was a later compromise. Both Democrats and Trump wanted more Covid relief.)

I don't see the $4.7B claim in the post. I guess you've added all the bullets. Their actual claim is:

MORE funding to foreign governments and to American arts centers, than to the American people

Without even checking whether the figures are in the law,

$198B vs $19B is obviously a more fair comparison than how that post presents the same numbers, even assuming they are correct, so their claim of "MORE funding to foreign governments and to American arts centers, than to the American people" is obviously very, very motivated thinking.

(It is actually difficult to compute the exact sum that would be spent on these direct checks because of the intricate rules that dictate who can get a check. For the prior CARES act that had $1200 max for an adult and $500 max for a child, the total sum paid in such checks was around $269 billion.)

Also, they claim that those art and foreign spending are part of the "deal" not of some specific bill, so (on the post's level of motivated thinking) they could conceivably claim that any other part of US gov't spending is part of some (backroom) "deal" agreed in return to actual stimulus spending. (Prove that it's not!) I mean take last year's (2019) headlines from a comparable source:

What a grotesque way to spend taxpayer money!

N.B. I'd be impressed if those individual checks (and art institution grants, if they're even in there and not some other bill--I've only seen mention of the Smithsonian grants elsewhere) are all there is in that new $900B stimulus. The previous one was nearly equally split between the [US] rich and the poor (and by that I don't mean they got equal per-capita benefits). But maybe the US rich don't count as part of the "American people" to some...

The new $900B stimulus was itself part of a $2.3T spending package, which e.g. also included $700B for the Pentagon. Was some foreign aid in there somewhere? Possibly, although I've not seen that highlighted in the press (I read). Not even Fox News' coverage mentioned it. Was foreign aid part of a (bigger) "deal"? YMMV, but all budgets passed by a divided government/Congress are an exercise in deal making, to some extent. Some legislators on both sides of the isle have complained (1st link in this para) that they had no time to read the 5,600 pages of this spending package, so they had no detailed idea what they were voting on.

The $900 billion COVID-19 relief deal that Congress approved after months of negotiations is one bill among many included in the $2.3 trillion year-end government funding package. Along with the COVID-19 relief stimulus bill, the package includes a $1.4 trillion omnibus bill which will fund defense spending and domestic programs, The Hill reports. After an excerpt of the spending package referring to foreign aid for Israel started circulating online, journalists from Tablet Mag and MSNBC and others reported the foreign aid is part of the year-end funding package but is not part of the COVID-19 stimulus package.

Although I could not immediately locate the articles it's alluding/referring to (maybe those were tweets).

Politifact covered this too now:

We rate it Mostly False.

But it seems Trump still didn't like it, for more or less the same reasons as the FB post:

He said: "This bill contains $85.5m for assistance to Cambodia, $134m to Burma, $1.3bn for Egypt and the Egyptian military, which will go out and buy almost exclusively Russian military equipment, $25m for democracy and gender programmes in Pakistan, $505m to Belize, Costa Rica, El Salvador, Guatemala, Honduras, Nicaragua, and Panama."

The president questioned why the Kennedy Center, a performing arts complex in Washington DC, was set to receive $40m when it is not open, and more than $1bn has been allocated to museums and galleries in the capital.

Mr Trump concluded: "Congress found plenty of money for foreign countries, lobbyists and special interests, while sending the bare minimum to the American people who need it. It wasn't their fault. It was China's fault.

"I'm also asking Congress to immediately get rid of the wasteful and unnecessary items from this legislation and to send me a suitable bill, or else the next administration will have to deliver a Covid relief package."

It looks like "no deal" for him. Now Democrats (e.g. Schumer) are saying they supported $2000 checks all along and Pelosi says she'd bring the $2000 issue to the HoR floor. Interesting times of what a budget deal may be...

In tune with Trump, other columnists wrote supportive pieces now e.g. in the Hill declaring that

Congress's 5,593-page porky 'relief' bill is essence of the swamp"

and leading with complaints about foreign spending. The fact that those are not in the stimulus bill proper is a distinction without a difference on a certain side of the political spectrum, since these bills are an "omnibus package". Likewise Fox News lined up behind (what is now) Trump's point, and in more than one show.

35
Are there more people with genius IQs living in China than there are people total in the U.S.?
10
Are the ABA and IRS foreign-owned private debt collection agencies?
22
Did most Mexicans who are in the U.S. illegally, enter through legal means?
12
In USA the foreign-born are only a fifth as likely to be incarcerated as the native-born?
40
Are deaths of patients with, but not because of, COVID-19 recorded as COVID-19 deaths in the USA?
5
In response to COVID-19, as of 20 April 2020, has China provided the US with over 2.46 billion masks?