Was the safety of a WW1 helmet called into question because survivorship bias was neglected?

A common story about the British "Brodie helmet", issued first in World War I, is the following: After introduction of the helmet, the number of reported head injuries increased. This called the efficacy of the helmet into question among "high military ranks", "high command", or "upper echelons". An unnamed mathematician, or statistician, or scientist, finally concluded that the reports were due to survivorship bias: The helmet seemed to have caused more head injuries, since soldiers with head wounds were now more likely to survive when wearing the helmet.

The story is reported (unsourced) in the Wiki article on survivorship bias, but not in the article on the Brodie helmet itself. It is reported by history youtuber Lindybeige in a video with a million views, in this article published by the Royal North Shore Hospital in Sidney, this article from the open journalistic platfrom medium.com, and multiple blogposts such as this one.

Sometimes the helmet is not explicitly named or goes by another name. I would be convinced by good evidence for this story being true about any helmet.

This looks like a made up claim, perhaps for educational purposes. I found it made in Paul Sloanes: "Lateral Thinking Puzzles", 1991. On page 24, "Historical Puzzles, 3.7 War Aims" and that exact solution on p83. No source given, just a puzzle to teach stats. (Like re-used here.)

Biggest problem in this detail: The British helmet went into service after the French were already convinced it was worth it.

When World War helmets were introduced, it was specifically to reduce head injuries from shrapnel. Which actually went down by 75%. Says the Imperial War Museum..

With such a number of direct improvement and helmets always seen by all sides, French, British, and Germans, from top brass down to the average grunt as "highly desriable", the claim seems to be quite ahistorical and improbable. There were some complaints in the British Army that a Brodie would make the men look "unsoldierly" and "go soft", but nowhere are records found that it increased head injuries over all compared to no helmet and over all survivorship.

It was designed primarily to absorb blasts and shrapnel, coming from above onto and into the trenches. It was quite good at that. A gunshot or rifle bullet protection was only a secondary role, and there it was still a vast improvement over felt caps, but far from perfect for that. Indeed, while almost all-around better than the French Adrian, the Brodie still had significant weaknesses.

These weaknesses then led to statistically relevant shift in relative distribution of the head wounds recorded, while overall casualties from head wounds still were much lower than otherwise expected, but caused or enabled by a known design weakness:

With some study at the time going like this:

A decade after the Russo-Japanese War, WWI produced particularly large numbers of occipital and cerebellar head injuries. Although shellfire caused the majority of head injuries in WWI, some of the injuries caused by bullets produced relatively restricted deficits whose extent could be estimated based on the trajectory of the bullet through the skull. Compared with earlier wars of the previous century, the muzzle velocity of rifles was moderately faster, and the bullets were smaller and much less deformable, allowing easy penetration of the skull without producing severe shock waves and cavitation in the brain.

In addition, the heads of soldiers had relatively greater exposure than other body areas above the parapets in the European trench warfare of that period, and the British “Brodie” helmet and the nearly identical U.S. Marine Corps Doughboy helmet gave insufficient protection to the back of the skull (in contrast to the protection afforded by German helmets and later American helmets) (Fig 1A, B).

As a result, more soldiers sustained and survived occipital bullet wounds than ever before, often with fairly discrete lesions, prompting studies of the visual pathways by a number of investigators, among which the work of British neurologist Gordon Holmes (1876–1965) was the most influential.
[…] 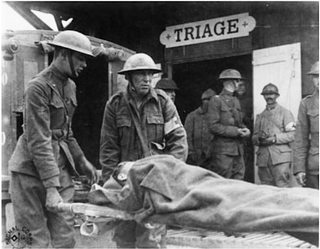 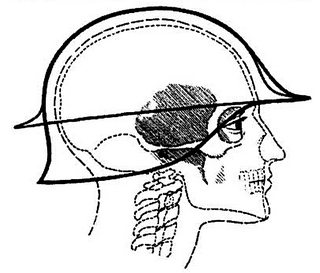 Fig 1. (A) Wounded arriving from a train at a triage station in Suippes, France, during WWI. Note how the British helmets leave the lower posterior portion of the cranium exposed, making soldiers more susceptible to occipital and cerebellar injuries. [Photograph courtesy of the National Museum of Health and Medicine, Washington, DC.] (B) Comparison of cranial protection provided by different helmet styles during WWI. The standard British model (thin line) provided no protection for the sides and base of the cranium, whereas these areas were protected by the newer American helmet, Model 2A.
— Douglas J. Lanska,: "Historical Perspective: Neurological Advances from Studies of War Injuries and Illnesses", Ann Neurol 2009;66:444–459, DOI: 10.1002/ana.21822

And these statistics were recorded immediately from the battlefields at the time: head injuries increased with trench warfare; with helmets head injuries to be treated increase, while fatal head injuries decrease:

The statistics given the author by Leriche are of interest. […]
The author comments on the fact that since the introduction of steel helmets the number of head injuries has increased considerably. He explains this by the fact that before their introduction many of those injured were killed outright.

Since such statistics were collected from the start and from the bottom up, it is very unlikely that anyone higher-up the food chain would ever question the practical utility of helmets for long.

Notably in the French army, the tests were already quite convincing, albeit mentioning the earliest form of 'this' among other criticisms:

Good reports soon came in from the front. Thereupon, he developed the regular helmet which was manufactured in great numbers for the French Army. […]

Investigation showed that the new helmet was of actual value in the field; hence it became a part of the regular equipment and was used by every soldier on active duty. Its use naturally added to the burden of each wearer, causing at first considerable grumbling. During the period of probation of the helmet, some of the critics pointed out that the number of casualties with head wounds increased notably, but the advocates of the helmet, referring to statistics, replied that the vast percentage of those who were formerly wounded in the head found their way not to hospitals but to cemeteries !

It is interesting to note that almost from the beginning the “casque Adrian” was a successful experiment. It protected a measurable portion of its wearer; it was light and soldiers of all classes shortly “took to it.” […]

There is no better evidence that armor is of practical importance in actual warfare than the testimony of physicians as to the value of the “shrapnel” helmet. In this case, at least, all criticism was overcome, although in the beginning there certainly were many objections to its use. Indeed, so severe was the criticism that had the French helmet not been introduced in very large numbers (the first lot included over a million copies), insuring it a thorough trial and under many conditions, the experiment might not have succeeded.

Various estimates have been made as to the number of casualties saved by the use of the shrapnel helmet. But these estimates are based on statistics obtained in different localities under different conditions, hence they are apt to be discordant. In a general way, however, hospital records (French, 1915) show that before the introduction of helmets about one head wound in four proved fatal. After the introduction of the helmet, however, statistics indicate that head wounds were fatal in, at the worst, one case in four and a half, and at the best one case in seven, a bettering of condition which is certainly appreciable. Add to this the saving of those men — and their number, although unreported, is great — whose helmets had resisted missiles which would otherwise have inflicted serious, if not fatal wounds.*

As a protection against missiles of low and middle velocity, there is no better evidence that armor has a definite usefulness in modern warfare than the fact that one type of armor ( i.e ., the helmet) is accepted by many nations as a part of their military equipment; for if such a defense, even when made of light metal, is capable of resisting small missiles of middle and low velocity, it is clear that similar defenses must have a definite value when worn on chest, abdomen, or extremities.
— The Metropolitan Museum of Art: "Helmets and Body Armor in Modern Warfare", 1920.

The protective role of the helmet is clearly demonstrated. Undoubtedly it preserves, intact or without serious functional disorders, the lives of many of our admirable soldiers. All of them are convinced of this and proclaim it. They are convinced of it and proclaim it. They do not want to part with it.
The confidence that it will surely increase their warrior value and thus contribute to ensuring the final victory.
The development of offensive weapons must always be accompanied by the development of defensive weapons.
Hygiene and prophylaxis must always take precedence over therapy: it is better to prevent harm than to cure it.

10
Did Napoleon introduce driving on the right side because he was left-handed?
18
Was the Marijuana Tax Act of 1937 passed because of the commercial interests of Dupont?
8
Was the combination of yoghurt and honey called "the food of the gods" in ancient Indian records?
4
Was the Taj Mahal originally called Tej-o-Mahal?
22
Did the Center for Naval Analysis recommend that the damaged areas be reinforced on all bombers, creating a famous case of survivorship bias?
18
Was the phrase "hello" popularized because of the name of Alexander Graham Bell's wife/girlfriend "Margaret Hello"?
52
Was the Ford Model T black because of the speed black paint dries?
56
Did the British navy fail to take into account the ballistics correction due to Coriolis force during WW1 Falkland Islands battle?
12
Did the Catholic church prosecute Galileo because he was teaching unproven ideas?
9
Could the diphtheria antitoxin (vaccine) have been flown into Nome, Alaska in 1925, but was chosen not to?