Does this picture depict the conditions at a veal farm?

This picture was shared by William McNamara on his Facebook page. 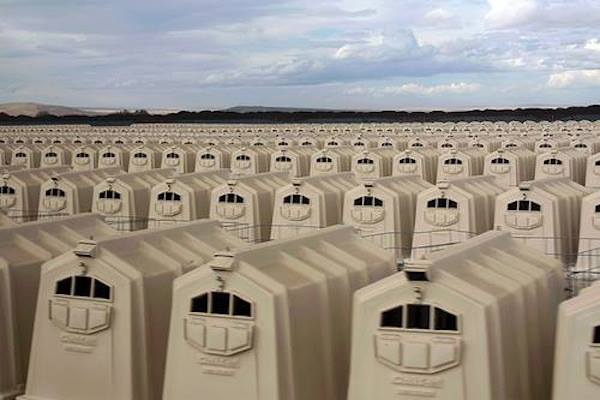 This is not a graphic pic, nor a gorey one,... though one to make you think where your food comes from. Can you guess what this is? This is in Oregon, and each crate has a calf in it, that was taken from their mourning, crying mother, one hour after they were born. Their mother had enough time, to clean up the birth, lick and intially bond with them, before they were taken away to live in these boxes, waiting to die in about six weeks. Here they will stay unable to move to make their "meat" tender until they become veal steaks. At the very least, give up veal. It's a really great start. Do something, anything.

Are these crates stored outdoors intended for calfs? Are they placed into these crates an hour (or shortly) after they're born? Is the lifespan of a veal-calf about six weeks?

Snopes rates that particular picture as a fairly misleading "veal hutch" which isn't actually used like that. 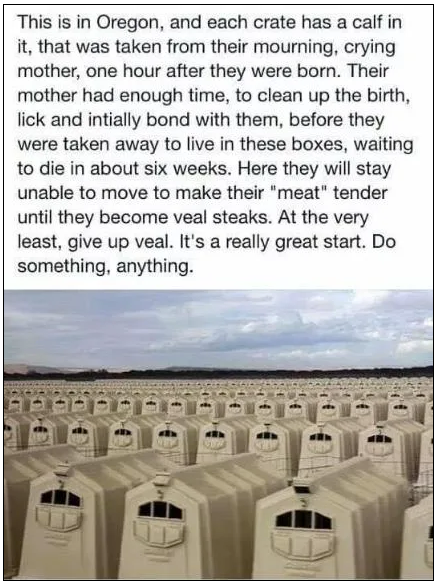 What’s pictured here are not crates in which calves are imprisoned within an hour of their birth, condemned to spend their entire lifespans stuffed into little boxes that don’t even provide them enough room to turn around in order to keep their meat “tender” before they’re marched off to slaughter after only six weeks. (Veal calves are typically raised for 16 weeks, not six.) This photograph actually shows calf hutches that are used to house calves being raised for dairy (not veal) purposes, and those hutches provide plenty of room for calves to turn around and as well as attached runs so that the calves can spend time outdoors.

More photos follow on Snopes, among which one that has seemingly the exact same 3-window pattern to the hutch, but seen from the inside. I guess this one is intended to prove there's "plenty of room for calves to turn" in those hutches: 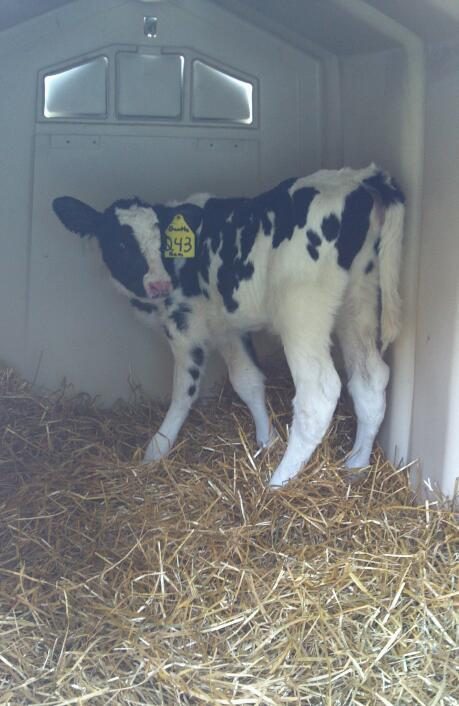 There are more photos with the outside wire pens attached and if you look closely at claim photo you can see the wire pens in that one as well, except that the hutches are shot from the back, so the pens are on the far side.

Also a bit more image searching finds the same ribbed-pattern hutches (with the three inner ribbs a bit closer to each other than to the out two) but shot from opposite angle; and this one has the calves in the image for relative-scale perspective; the calves in this photo seem more mature: 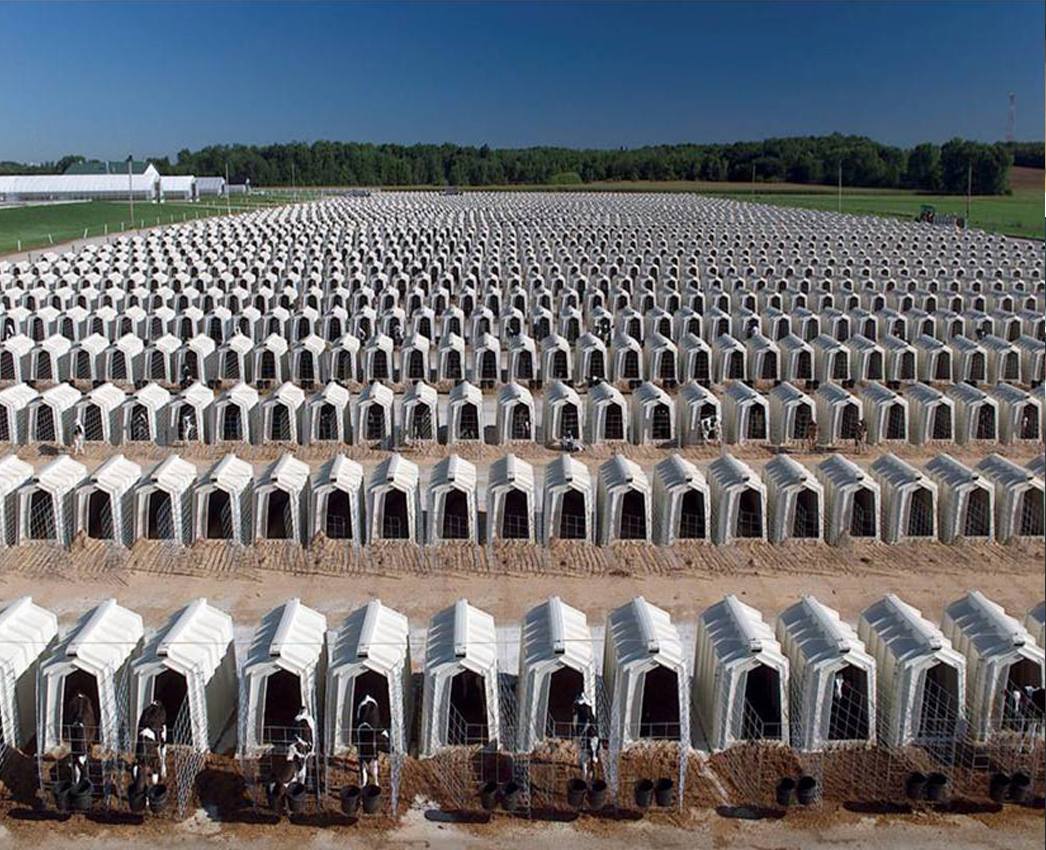 As far as the purpose of such a practice goes, the USDA itself recommends in a 2007 document (p. 63) that:

Sure there are some recommendations or regulations for minimum sizes etc., as OP's own answer details.

And in a (much later) section that is detailed to be for "biosecurity" (disease prevention) reasons:

Keeping preweaned calves separate from older animals is an effective way to reduce their exposure to disease. Preweaned calves are more susceptible to disease than older, healthy animals because their immune system is not yet fully developed (BAMN, 2001b). Physical contact between preweaned calves and cattle from older age groups (including nose-to-nose, sniffing, touching, licking, or contact across fence lines) increases the risk of exposing the calves to diseases such as salmonellosis, Johne’s disease, and upper respiratory diseases. The percentage of operations in which preweaned heifers were not exposed to weaned calves, bred heifers, or adult cattle increased from 1996 to 2007. 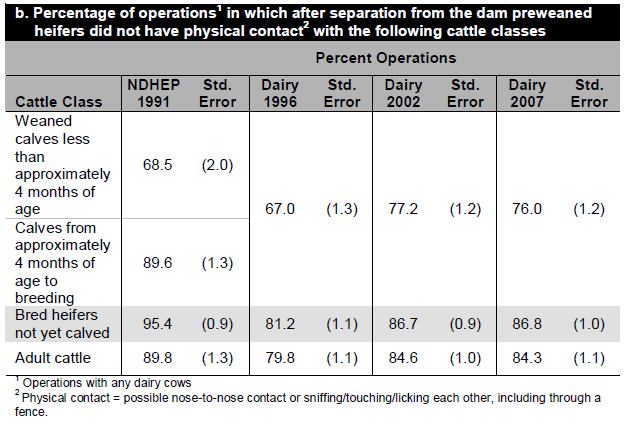 Whether this common US practice has some other deleterious side-effects because individual housing "lacks physical and social stimulation, limiting calves' ability to perform natural behaviors" has been investigated in some papers, but we're getting a bit far afield from the claim here.

Interestingly, in the UK, since 2018 Tesco has banned the use of single-calf hutches for its suppliers, citing some papers like the above, i.e. they require that calves be reared at least in pairs from day one.

There are actually precious few illustrations of what a "veal crate" looks like (or looked like, before the various bans). I found a fairly credible one on the website of an organization that fought for their ban in the EU. (The ban was adopted in 1995, but had 12-year grace period, becoming fully effective in 2007.) 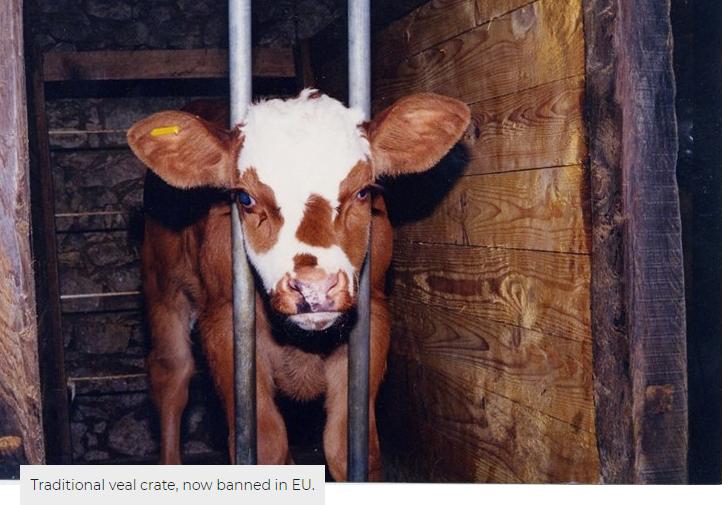 Also on the EU side, you could look at video of a contemporary (2017) "veal shed" in the Netherlands. Similar video of a US veal farm (2019). Individual indoor pens for young calfs can be seen briefly. 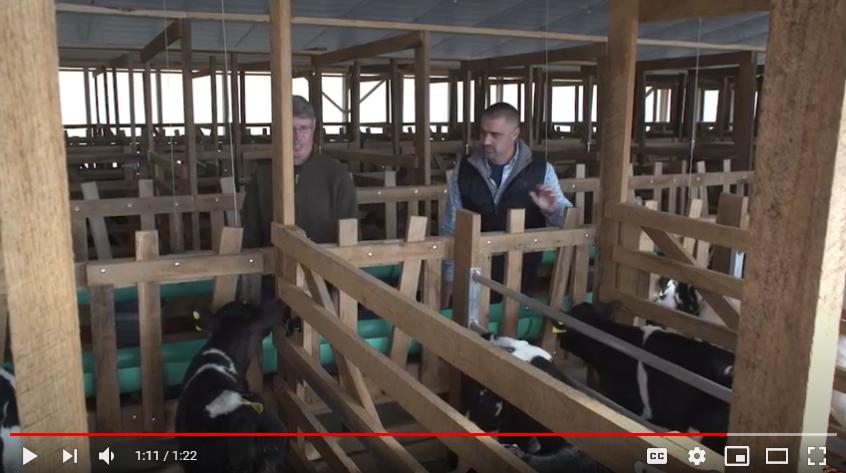 The internet makes it fairly easy to find a site that sells calf hutches. For example, this site sells hutches, buddy hutches (for pairs of calfs) and group hutches. You can check out the dimensions: https://calfhutch.com/. Here's a competitor: https://loyal-roth.com/products/calf-hutches/.

Both sites claim that their hutches promote comfort for the calf (or calves).

It seems there have been an exchange of the order of magnitudes of times, to get attention via social sharing.

What isn't true is the six-week period to slaughter. We will never know whether or not the calves in these crates in question were destined for dairy or veal, only that calves and heifers are both crated under similar circumstances when young, and that veal calves can be further crated until slaughter.

The device shown is sold as a "hutch", but dubbed a "crate" by animal rights activists. The United States has no federal laws against putting veal calves in hutches, but many states have laws against this.. Moreover, many countries have banned the practice like Britain in the 1990s; and, the entire EU banned the practice in 2007. The federal government of Canada defines hutch as,

Hutch: any type of outdoor enclosure that includes some type of overhead cover used to rear 1–2 calves (some hutches are designed to house 4–5 calves). Hutches may be purchased or made.

All of the bolded things match this description. These are purchased covered outdoor enclosures for one calf. The Canadian "Code of Practice" for veal states,

Well-managed hutches provide a good housing option for young calves, especially when hutches permit social contact by virtue of their design/size or the way in which the hutches are arranged.

Which doesn't just acknowledge their use, but seems to encourage it. That some veal farmers were not allowing their calves in hutches access to the outdoors seems likely too as the Canadian government just enacted a change that will go into effect in December of 2020 to make this a requirement. The American Veal Association also passed a resolution and phased out the practice of crate confinement in 2017 (couldn't find information on how they define "crate confinement". To argue that single-calf hutches like those shown where not used as tools to isolate veal-calves is to say these regulations were moot when created in the USA and elsewhere.

You can see pictures of calves for veal use in hutches that are not confined at Veal Farmers of Ontario's website. Note these are very similar outdoor enclosures they just provide metal fencing to keep the calf in rather than restraining them to the container itself via chain or rope, or providing a door. This is the "social contact" suggested above. 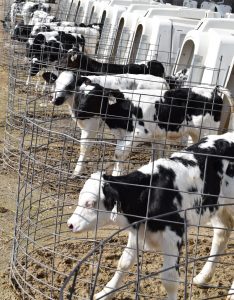 As to when they get separated from Vealfarm

Both male and female offspring of dairy cows are normally removed from cows within three days of giving birth.

Now, are these specific crates for veal or dairy? I imagine they could be purposed for either. The Veal Farmers of Ontario are showing pictures of dairy crates and heifers on their webpage (picture above).

Not the answer you're looking for? Browse other questions tagged meat animal-welfare .

91
Did Valerie Jarrett say she wanted "America to be a more Islamic country"?

5
Does chicken meat from the US contain arsenic?
20
Does red meat increase the risk of heart disease?
26
Does the means of slaughter affect meat quality?