Is the religious population declining?

Different groups argue that the numbers of religious people are either shrinking or growing, often depending on which group they are from.

One example of the shrinking religious viewpoint is the intro to this video talk by Dan Dennett http://www.youtube.com/watch?v=m5tGpMcFF7U

One example of the growing religious viewpoint is this article from the Vatican:

Interesting enough the numbers on the wikipedia page for "Claims to be the fastest-growing religion" show positive growth rates for various religions.

For some reason, when reading about, or listening to claims about things people argue over, and disagree with, I am reminded of a quote:

"There are three kinds of lies: lies, damned lies and statistics." - Mark Twain's Own Autobiography: The Chapters from the North American Review

A site that I am fond of for researching the things people do and don't believe in concerning deities, is adherents.com. Another site is religioustolerance.org. What these sites do is basically collect the info from population sites and surveys and collate it. Keep in mind, the gathering of religious data is notoriously difficult because the identification system used varies throughout the world, and within many different cultures and countries.

So, about the specific claim? Well, they are both right in a way. It all depends on how you look at the numbers. There are declines in attendance over all as a percentage (and in some cases by sheer numbers). If you look at this page (and I recommend you look at the whole page, not just this bit I am quoting), some interesting bits of data to support Dennett are:

There are some interesting signs that religion is in a state of rapid flux, both in the U.S. and around the world:

In addition, there is "A mathematical model of social group competition with application to the growth of religious non-affiliation (PDF link)" Daniel M. Abrams and Haley A. Yaple Department of Engineering Sciences and Applied Mathematics, Northwestern University, Evanston, Illinois which also supports Dennett's position, although I would caution that it's not definitive, since it is just a projection.

What about the claim by the Vatican? Well, they are very actively recruiting on the African continent, and have reported that consistently. Another factor could also be the catholic teaching (vice dogma) of large families and no contraception has aided in keeping their population growth marginally higher than other populations in the same area (although this has probably changed as many adherents pick and choose specific teachings which to follow).

This page has a table that shows major religions at a top level. And it notes that as a percentage, some are declining, others are growing. And here it lists Christianity as declining. So perhaps the growth of the Catholics is a consolidation of other Christians as well? Thank you to Randolph for pointing me to the religion in Canada page. As you can see from the Wikipedia page on the Canadian Census results, there is a growth in Catholicism AND Christianity. Although, neither growth rates match the population growth rate. On the affiliations that have a very low total number of adherents, a relatively small numerical growth will skew for a very significant percentage growth. In looking at Canada, we do see somewhat similar trends in other countries that track religious affiliation, like the United Kingdom (although they don't have a nice table like the Canadian page, but the graph is telling). 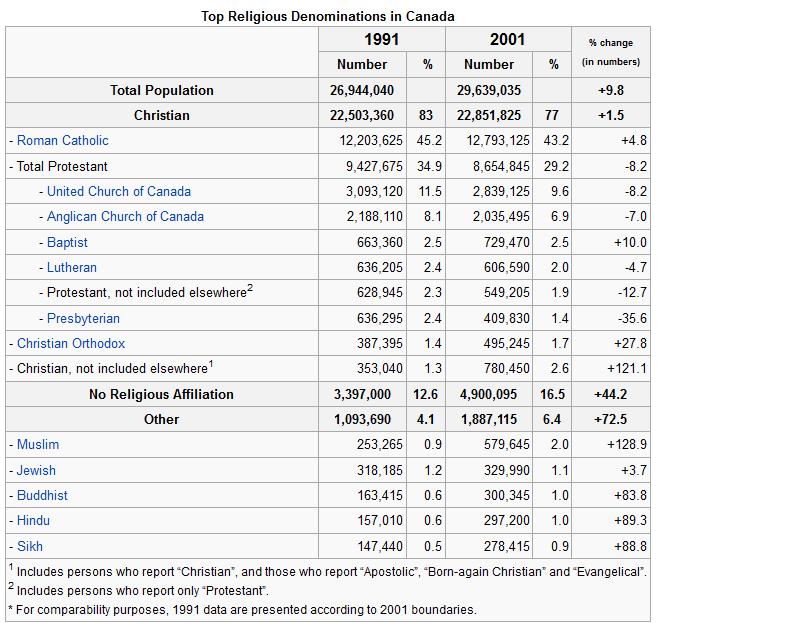 So, in answer to your question, they are both right in their own way. The only way to really know whose vision will bear out in the end though is to wait until the future arrives. And my prediction will be that everyone will be consistently incorrect in some way or another. Although, in the developed world, Dennett is more correct, and in the undeveloped world, the church is more correct.

24
Is atheism the fastest growing "religion" in the history of the United States?