Did a "Drop and Roll" phenomena expose that the 2020 election was stolen?

Jim and Joe Hoft, of the Gateway Pundit, identified an apparent fraudulent voting phenomena that they dub "Drop and Roll" in a YouTube video.

They claim that in a number of states, Trump was winning the count, when suddenly "Tens of Thousands of Unexplained Votes" put Biden in the lead, and after that the remaining votes were fixed to be very close to evenly split.

They further claim that these ratios are "impossible".

These Rations are IMPOSSIBLE!

It makes similar claims for Michigan, Virginia and Pennsylvania (In Pennsylvania, the claimed ratio of the trailing votes was closer to 40% for Trump.)

Are these figures accurate, and do they indicate voter fraud?

It's hard to see much if any detail in those blurry spreadsheets, but 538 has some update graphs that contradict such a constant difference, more so in battleground states. In particular for Georgia they note that "Biden's lead only surfaced around 58 hours after Georgia's poll closed". 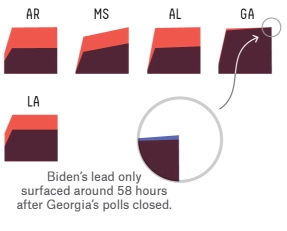 In greater zoom/detail, the fact that those updates are not constant is more obvious: 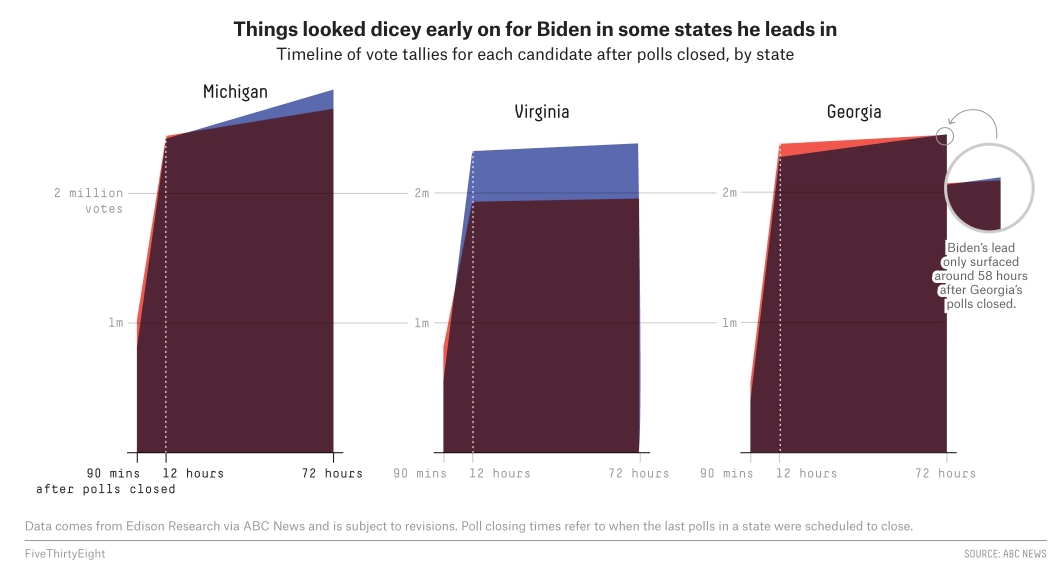 Alas the numeric datasets are not public.

IN GP's blurry spreadsheets (e.g., the one for Michigan) you can see one thing however: while the total number of votes is an integer, the number of votes for Democrats and/or Republicans are floating point numbers! Which almost certainly means they are not really numbers reported by the boards, but they are probably "reverse engineered" from the percentages in the columns to the left (which only have three digits, i.e. one decimal as percentage). These percentages seldom change in the screenshots posted, so I don't see why you'd expect the approximate difference (which is not a real/precise vote count difference) to change their decimal points when recalculated as percentage in the final column: 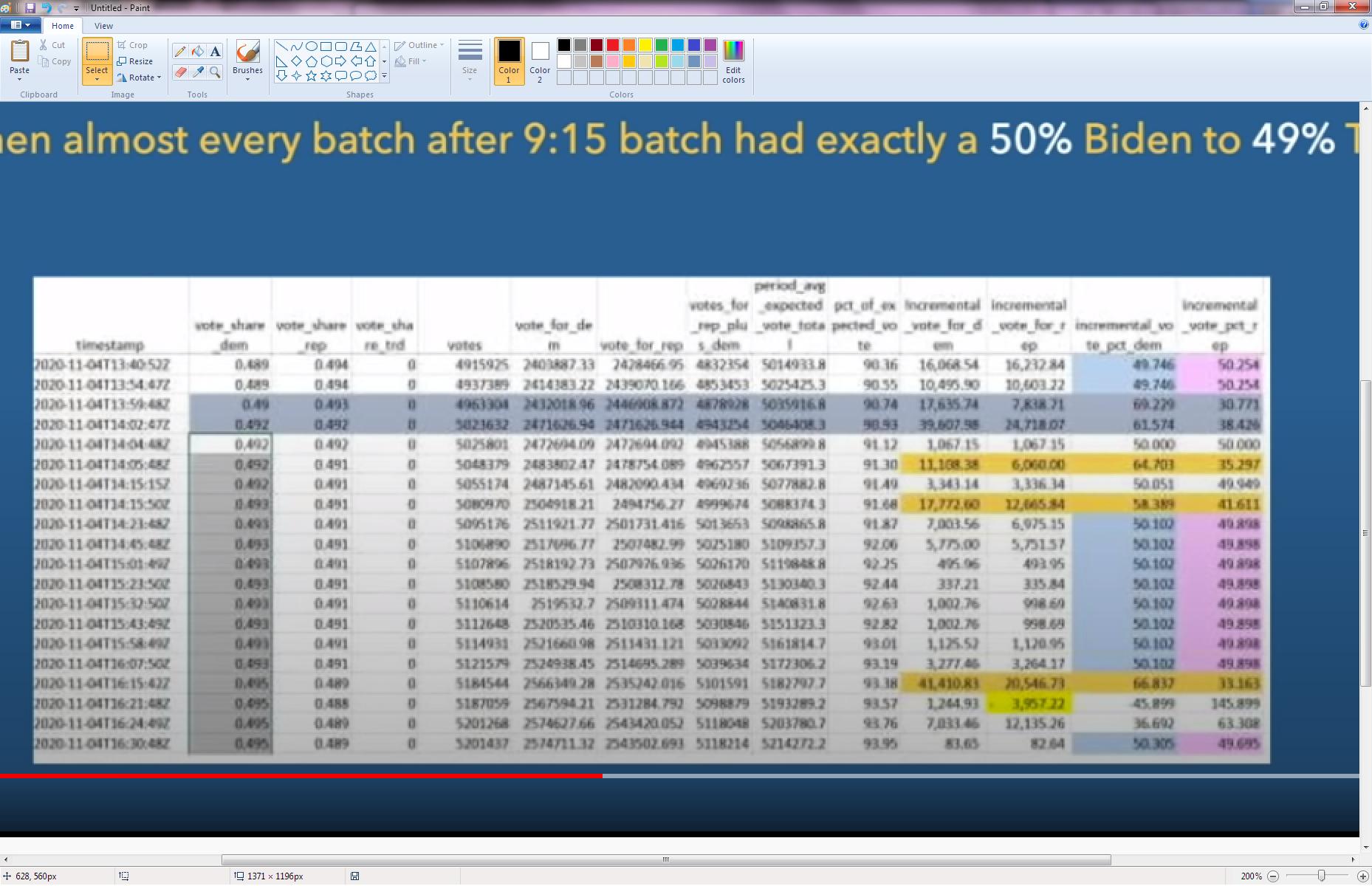 On closer inspection, there's actually a change in the final colored columns... precisely when there is a change in the leftmost percentage columns, which probably explains the "impossible" "roll".

Also, the "drop" as the Gateway Pundit calls it, isn't a single process. In some states (e.g. Pennsylvania) it took days even by GP's account and there's nothing "unexplained" about ahem... counting votes.

The only actual "drop" that GP presents, i.e. sudden increase in votes is one in Michigan, which is possibly the clerical error there that has been discussed in the press (and was corrected).

The underlying claim amplified by Trump came from a GOP consultant, Matt Mackowiack, who shared screenshots of an interactive map of election results in Michigan depicting Biden climbing nearly 140,000 votes while Trump and others remain stagnant. The map, which appears on BuzzFeed News, is powered by the election data-gathering firm Decision Desk HQ. [...]

On Twitter, live updates from Decision Desk HQ showed that between 5:04 a.m. and 5:43 a.m. — as additional votes in Michigan came in for Trump — Biden’s numbers were updated and actually dropped by 110,796.

The fact that GP's dataset has a sudden increase in Michigan (for Biden) but not also the sudden decrease that followed it in the actual data, makes me think his dataset is doctored or incomplete.

Now, if it needs saying (since this was covered ad-nauseam in practically every mainstream article on the 2020 elections) this "dump" which was actually a trickle of late votes for Biden was not unexpected, having been predicted before the election, and even being "in line" with US elections in the past 20 years, as this Nov 1 article in the Guardian illustrated: 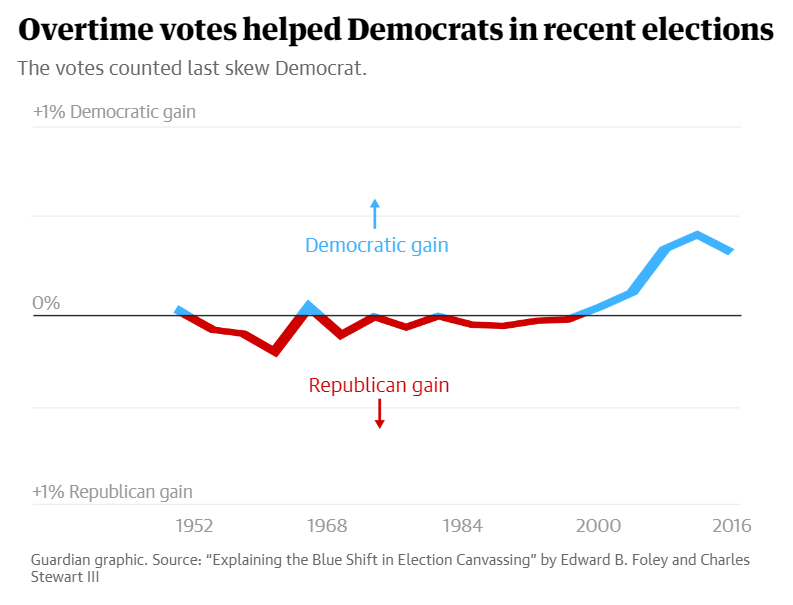 Things will be drastically different in 2020. A record number of people have already voted by mail, and in the battleground states – like Pennsylvania – it’s Democrats who are requesting and returning ballots at a far higher rate than Republicans.

There have been more detailed articles on the latter topic, e.g. CNBC reported on October 27 on early voting stats:

Democrats still lead Republicans in mail voting for states that report party data, but GOP voters have surpassed Democrats in ballots cast in person. Of the more than 26 million returned mail ballots tracked by the U.S. Elections Project, registered Democrats have sent in 51.3%, compared with 25.5% from Republicans. Of over 7.4 million in-person votes with party affiliation reported, Republicans lead with 41.7% over Democrats’ 36.9%.

The reasons for the late trickle of pro-Biden votes in states was in large part due to the slower processing of mail-in ballots compared to in-person voting. E.g. CNN was reporting on Nov 5

Officials in key battleground states -- including Pennsylvania, Nevada, Georgia and Arizona -- whittled down the mountains of uncounted absentee ballots Wednesday as President Donald Trump cast doubt on their work. [...]

Mail-in ballots, which smashed records this year as a result of the Covid-19 pandemic, have favored Biden, whose campaign encouraged Democrats to vote early, while in-person votes on Election Day appear to have given Trump an advantage. [...]

In Michigan, Pennsylvania and Wisconsin, election officials were not allowed to begin processing absentee ballots until on or just before Election Day, after Republican-led state legislatures successfully opposed changing laws to allow earlier preparations like other states.

The article also details some technical problems that caused Georgia to count its mail-in ballots slower than initially expected.

Finally, the "dump" in Virginia in the "middle of the night" (which is hard to verify as such) has received a lot less press because Virginia was not expected to be a swing state, having gone by +5% to Clinton in 2016. A bit of investigation in the state-level press suggests that the reason is probably that Virginia had unusual rules for counting the absentee/mail-in ballots: while these could be sort-of counted (scanned) before election day, the totals could not be reported:

Virginia law allows the ballots to be opened and scanned — but not counted — before 7 p.m. on election day. Plus, there were ballot drop-boxes to empty and physically count that day. [...]

Why weren’t there updates on early votes along the way? Because those votes are collectively considered a stand-alone precinct, and the results of votes by precinct are only reported once they’re all recorded, said Christine Lewis, Virginia Beach’s deputy registrar. On Election Day, there were a couple thousand that still needed to be scanned in addition to the ones that needed to be verified by hand and were picked up from drop-boxes when polls closed.

Additionally, there was a brief error in the reporting from one of Virginia's counties, somewhat similar to what had happened in Michigan, but apparently not affecting state-reported totals, even temporarily:

In Fairfax County, Virginia, absentee ballots cast either by mail, dropbox or early in-person are sent to the Central Absentee Precinct, one of 243 precincts in the county, according to spokesperson Brian Worthy during a phone call with USA TODAY. [...]

County registrar Gary D. Scott stated the CAP ballot counts were manually entered into the Fairfax County's unofficial election results spreadsheet, but within about 10 minutes, Scott and other members of the Electoral Board noticed 100,000 votes had been erroneously added to Democratic candidate Joe Biden's total.

"(The data entry people) had entered in the 10th Congressional District three times," Scott said during the same phone call.

Both Worthy and Scott confirmed the incorrect result was never reported to the Virginia Board of Election — thereby not impacting total unofficial votes counted for the state — and was amended the same day on the county's unofficial results spreadsheet.

But more to the point, a 7:25 AM on Nov 4, a journalist Tweeted calling Virginia for Biden:

Now if you check the (still unofficial) results from this Absentee Precinct, you see about 320K votes for Biden (and only 85K for Trump), so the sudden reporting from this precinct is almost certainly the Virginia "dump": 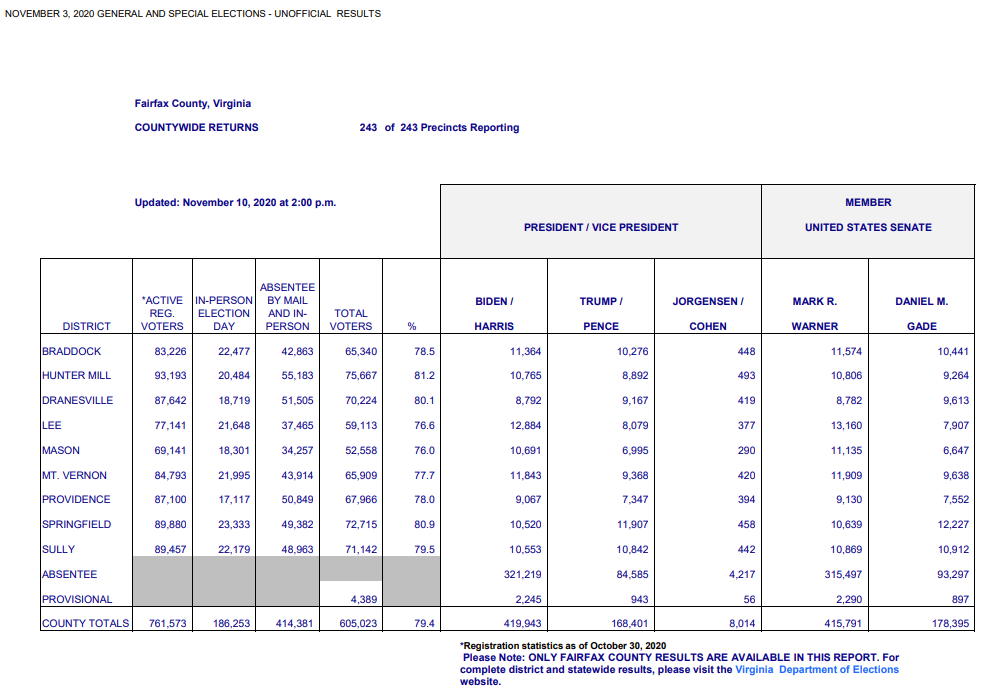 I also found one mention in a related context that poll analyses by GP aren't considered terribly reliable; FactCheck.org says:

The numbers mentioned by Trump seem to come from the conservative website Gateway Pundit, which cites an anonymous person’s post, claiming to have done this analysis, on a pro-Trump site called thedonald.win. Gateway Pundit, which has a history of spreading misinformation, wrote “we have not verified the results so we currently are labeling his results ‘unaudited.’”

The anonymous author claimed the data came from Edison Research.

That last line/claim is actually consistent with the format of the NTY-republished data from Edison. One thing to note there is that the state-aggregated data published by NYT from Edison lacks actual vote counts and only has those three-digit ratios which improperly interpreted result in those "rolls". (Edison does have much more accurate precinct-level data, with precise vote counts for each candidate, but finding a full history of those updates is much more challenging because it's one update per file... and you seemingly have to guess the timestamps down to the millisecond to access them on NYT's site.)

12
Is there less than a one in a quadrillion chance of Biden winning states where Trump held the early lead?

149
Do vote counts for Joe Biden in the 2020 election violate Benford's Law?
45
Were a large number of votes from suspiciously old Pennsylvanians received in the 2020 US presidential election?
6
Are these anomalies in the Biden-Trump vote data indicative of voter fraud?
72
Did a computer error lead to 6,000 votes switching from Joe Biden to President Trump?
5
Is Shiva Ayyadurai's statistical analysis of the 2020 election evidence of widespread fraud?
5
Did Dominion Voting Systems machines miscount millions of Trump votes?
8
Do the 2020 votes for Trump and Biden add up to more than the total number of votes made?
11
Does New York restrict voting more than Georgia's new law?