Have "government handouts" increased the suicide rate in Alaska?

Wikipedia's biography of Don Young, the U.S. Representative for Alaska's at-large1 congressional district, says among other things that:

When asked about the fact that the state of Alaska has the highest suicide rate in America per capita, Young has stated that he believes the high suicide rates are at least partially the result of government handouts, and that "this suicide problem didn't exist until we got largesse from the government." He believes Alaska needs to cut public assistance programs.

To the extent that it is possible to investigate causality in social sciences, how factual is the idea that suicide rates in Alaska (or even elsewhere) are increased by "government handouts" such as public assistance programs?

The claim is not supported by the data nor experts

The claim is that "government handouts" are the single largest driver of suicide rates in Alaska. It's unclear what Young is referring to.

One large "government handout" particular to Alaska is the Alaska Permanent Fund established in 1976 which started paying out in 1982. If Young's claims were true, we should see a strong correlation between payouts and suicide rates. And we should see a sharp spike in suicide rates after payouts began. 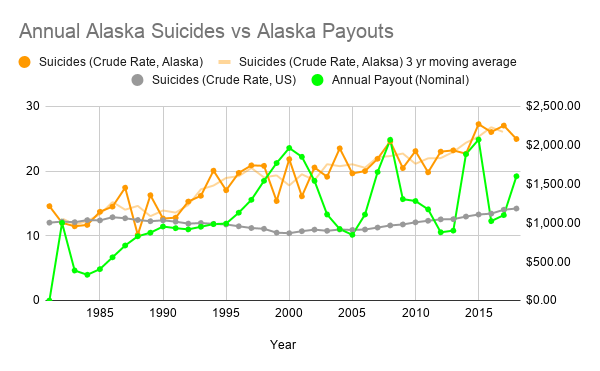 Note: The total annual suicide rates in Alaska are about 50-130. With such low absolute numbers, the data will be jittery. I've provided a 3 year moving average trendline to help.

"this suicide problem didn't exist until we got largesse from the government."

Unfortunately I do not have data prior to 1981, but if this statement were true 1981 should be significantly lower than following years and then it should climb once payouts begin. Instead the suicide rate remains flat from 1981 to the early 90s when it begins to climb well ahead of increases in payouts. As the payout rate fluctuates, the Alaska suicide rate trends upward at about the same rate as the rest of the US.

"When people had to work and had to provide and had to keep warm by putting participation in cutting the wood and catching the fish and killing the animals, we didn’t have the suicide problem, [...] it comes from the largesse of saying you’re not worth anything but you’re going to get something for nothing."

Clearly they did have a suicide problem prior to the payouts beginning in 1982.

“Alaska has one of the highest rates of suicide in the United States and it is disappointing that Representative Young would say such ill-informed remarks about something that is taking the lives of his constituents, young and old, across the Frontier State,”

“Alaskans attempt and die by suicide for a complex number of reasons. Many of those people have loving and supportive friends and family,”

The Alaska Department of Health and Social Services has this to say about the causes of suicide.

There is no typical suicide victim. Most individuals having these risk factors do not attempt suicide, and others without these conditions sometimes do.

Not the answer you're looking for? Browse other questions tagged united-states government suicide .

14
Is the Chinese government responsible for hacking U.S businesses and government?
6
Do higher rates of lithium in groundwater lead to a decreased suicide rate?
9
Has the US Government tagged people to be killed with stickers on the mailboxes?
83
Is the US federal government still paying Civil War survivor benefits?
9
Did the US government classify the Whaley House as haunted?
15
Have 41% of transgender people attempted suicide?
9
In 1984, was the top income tax rate lowered from 70% to 28%,and was Social Security then taxed for the first time?
24
Do "people who undergo gender transition" die by suicide at a rate "about 20 times higher than their peers"?