I have heard of 3.5 million year old bacteria being revived, but 250 mya is much longer, and I can find no modern mention of this astonishing claim anywhere. However, it was mentioned in multiple contemporary newspapers, such as The Bridgeport Post.

Dr. Chudinov seems to be a real person, as there is a bacteria named after him, Haloferax chudinovii.

MOSCOW (UPI) A Soviet geochemist has brought back to life organisms that flourished 250 million years ago, the official Tass news agency says.

He was only trying to find the origin of the red color of Some potassium ore. Tass said "the paleozoic visitors which came to life, grew and even multiplied" were a surprise.

Tass said yesterday that an article in the current issue of the monthly magazine "Soviet Union" detailed the work of geochemist N. Chudinov of the Berezniki potassium combine near Perm, 800 miles east of Moscow.

"THE DISCOVERY of the organic nature of the coloring in Perm's potassium salts also became the discovery of the ability of organisms to remain in a state of anobiosis, or deep lethargy, and, under certain conditions, to return to active life," Tass said.

According to Tass, Chudinov discovered organisms "which flourished 250 million years ago, during the Paleozoic era, in the Great Perm Sea, the waves of which once rolled from the north Urals to Kharkov."

TASS DID not explain how the age of the organisms was determined.

"But Chudinov didn't merely discover this ancient and mysterious world — he revived it in his laboratory," Tass said. Tass quoted an otherwise unidentified professor, B. Perfilyev, as saying:

"This is a discovery of world significance and may enable us to penetrate into nature's holy of holies — the evolution of life on earth."

Although there seems to be some remaining controversy over definitions between alive, re-animate, survive, dead etc. For example: Where the bacteria 'alive' while no longer metabolising anything?

The initial skepticism regarding the actual findings however can no longer be denied: Were they really that old? Apparently yes. Or was this a result of unclean working conditions? Cannot be ruled out for 'back-then', but when 'working certified cleanly' now the results can be replicated.

That a species within that range of extremophiles is named after him for his pioneering work should give a hint.

Although in the West some skepticism indeed greeted this obscure discovery from Soviet scientists:

— F. E. Clark: "Problems and Perspectives in Microbial Ecology", Bulletins from the Ecological Research Committee/NFR, No. 17, Modern Methods in the Study of Microbial Ecology (1973), pp. 13-16

But his name is really more present in the Russian language internet, where we find some acknowledgements:

– Litovskiy Vladimir Vasilievich: To The Update Of The History Of Discovery By Geochemist N.K. Chudinov In Potassium Salts Of The Verkhnekamsky Deposit The Phenomena Of Geobiogenesis And Superlong-Long Anabiosis Of Paleomicroorganisms", History and modern worldview, Issue No. 4, 2019. (pp100–114) (In Russian.)

That looks like an 'inside report' or even almost a homestory – in very patriotic Russian – of how Chudinov made his discovery, (and apparently already in 1955?!). The initial discovery looks indeed not very trustworthy in terms of methodology etc, but it was a chance finding after all and it took a few years for him to get these results recognised and published.

On that page however, we find not only the famous Bruchkov-story as a correlate to Chudinov's discovery, but also a lot of footnoted references, and among them also links to social media, where the original report is shown in pictures: 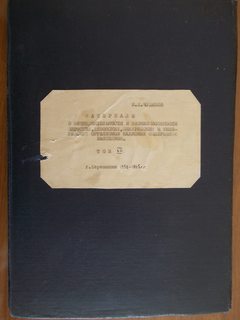 And he now even has had a museum dedicated to his groundbreaking discovery:

"ARE THEY ALIVE ?!" - New Exhibition At The Museum Of Permian Antiquities 27 August 2019

The new exhibition will tell about the study of microorganisms of the Permian period.

A mini-exhibition dedicated to Nikolai Konstantinovich Chudinov will open at the Museum of Perm Antiquities on August 27.

Nikolai Konstantinovich Chudinov in the 1960s became interested in the nature of the color of the salts of the ancient Permian Sea. He was not satisfied with the theory that existed at that time, which explained the color of salts by the presence of iron oxides. Nikolai Konstantinovich put forward a hypothesis that the color was influenced by microorganisms. After dissolving a sample of potassium salt in water and examining the undissolved sediment through a microscope, he discovered many types of growing microbes.

It would seem that there is nothing surprising – microbes are present in our environment. But these microorganisms were found in rocks of 250 million years old, and, as N.K. Chudinov, got out of the state of suspended animation, that is, "woke up", finding themselves from the Permian period immediately into the present.

The discovery of N.K. Chudinov caused controversial reviews in scientific circles, and at one time it was not recognized. Discussions about ancient "living" microorganisms are still going on in the scientific community.

At the exhibition "Are They Alive ?!" in the Museum of Perm Antiquities, for the first time in many years, the story of Nikolai Konstantinovich Chudinov will be presented. The main exhibits of the exhibition will be copies of archival documents showing the history of Nikolai Konstantinovich's attempts to prove his discovery. The documents were provided by the scientist's niece, Galina Vasilievna Chudinova. Samples of minerals from the Verkhnekamskoye deposit will also be presented. Visitors to the exhibition will be able to watch the popular science film "Prisoners of the Perm Sea" about this discovery, which was shot in 1970 by the chief director of the "Lennauchfilm" studio Tamara Ivanovna Iovleva.

It appears the original scientific publications were

Those I cannot locate at the moment, but the date discrepancy towards "1972" in question seems rather noteworthy.

In any case, such findings like those of Chudinov's are reproducible:

Here we report the isolation and growth of a previously unrecognized spore-forming bacterium (Bacillus species, designated 2-9-3) from a brine inclusion within a 250 million-year-old salt crystal from the Permian Salado Formation.

Previous reports of bacteria isolated from salt have met with resistance, partly because of concerns for contamination. Samples from many studies have been described as brines, rock salt, efflorescences, recrystallized salt or wet salt. These terms provide little or no assurance of the provenance of the sample or geological history. Flowing brines and salt efflorescences, for example, may be contaminated and young, and recrystallized salts may be of indeterminate age.

In our study, however, we support the discovery by geological evidence of the overall age and stability of both the formation and the individual crystals, as well as the documented sterility maintained during the sampling and lab work. This research doubles the length of time bacteria can survive trapped inside stable geological materials.
— Russell H. Vreeland, William D. Rosenzweig & Dennis W. Powers: "Isolation of a 250 million-year-old halotolerant bacterium from a primary salt crystal", Nature volume 407, pages 897–900, 2000.

It turns out there is a film about this study — Узники пермского моря (1970) (Wikipedia) — in which experiments are shown and the methodology is explained. It is in Russian. The film summarizes the following information:

The video shows Dr. Chudinov. At the 8th minute of the film, one of the experiments is shown. It is shown how the material for the experiment is taken, how sterility is observed and checked. The sample is placed in formalin, then fired, then immersed in a microbial-free box. To make sure that there are no microbes, smears are taken from all surfaces and placed in a nutrient control medium. If there are microbes, then they will grow in a nutrient medium. Microorganisms for revitalization are taken from the depths of the rock, where the external environment could not penetrate. According to the results of this experiment, the control flasks were clean, while turbidity and live microorganisms appeared in the flasks with rock.

Not the answer you're looking for? Browse other questions tagged biology soviet-union .

50
Russian scientist injects himself with 3.5 million-year-old bacteria, says he is now stronger and hasn't gotten ill in 2 years