Is there only one photograph of Neil Armstrong on the Moon?

Christie's is a famous auction house. In their press release and marketing material, Christie's Voyage to Another World: The Victor Martrin-Malburet Photograph Collection, you can find the following claims

They go on to repeat that claim in the text,

These rare pictures lay uncelebrated for decades, such as the first photograph of Earthrise, the only photograph of Neil Armstrong on the Moon and incredible panoramas taken by each of the 12 astronauts who walked on the Moon.

Of all the photos taken on the moon, is there only one with Neil Armstrong? Is he in the periphery of another, or are there other photos of Neil? Or, is this claim true?

Christie's claim is that this picture is the only picture of Neil Armstrong on the moon, 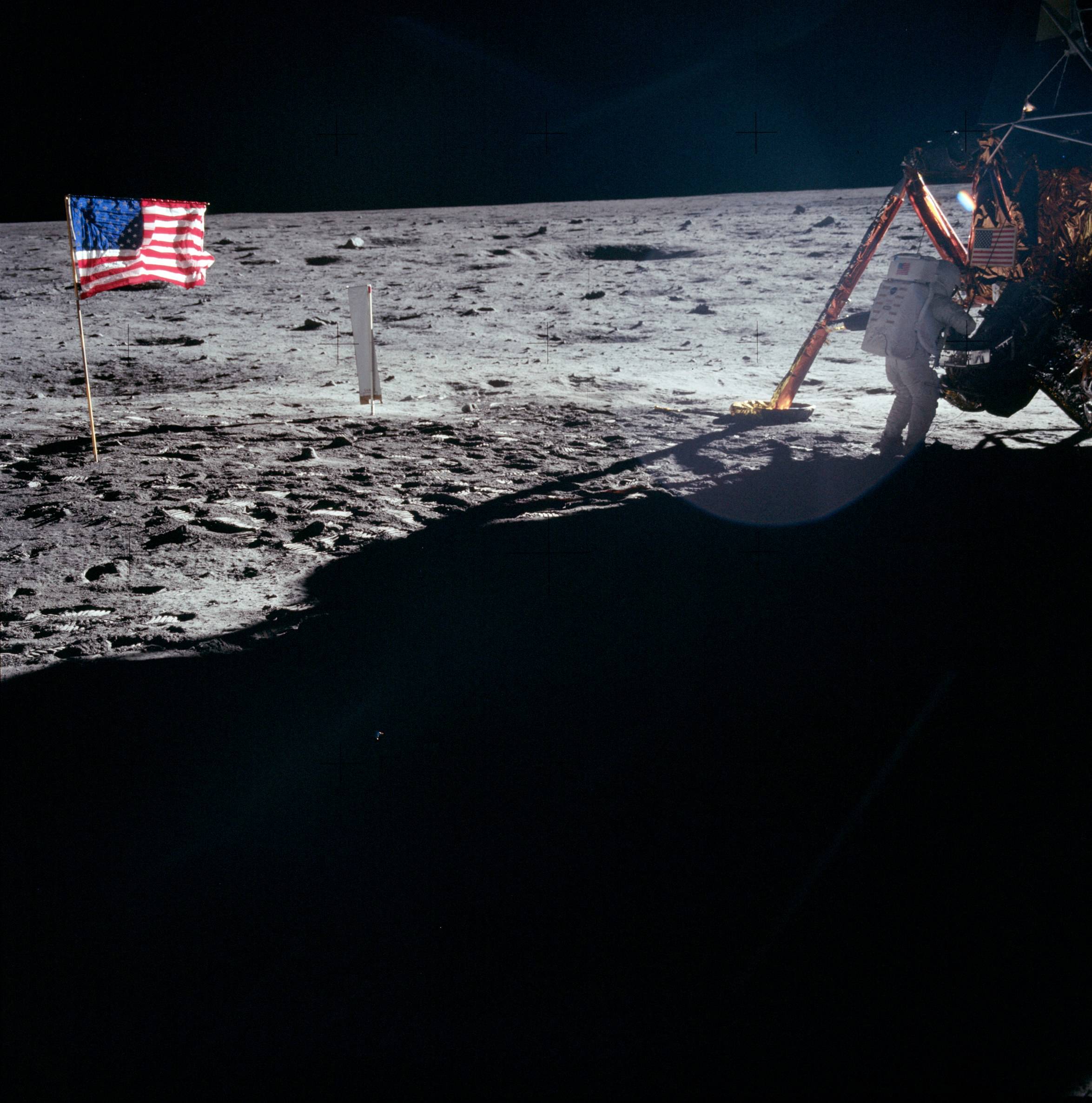 Here's another photo of Neil Armstrong on the Moon: 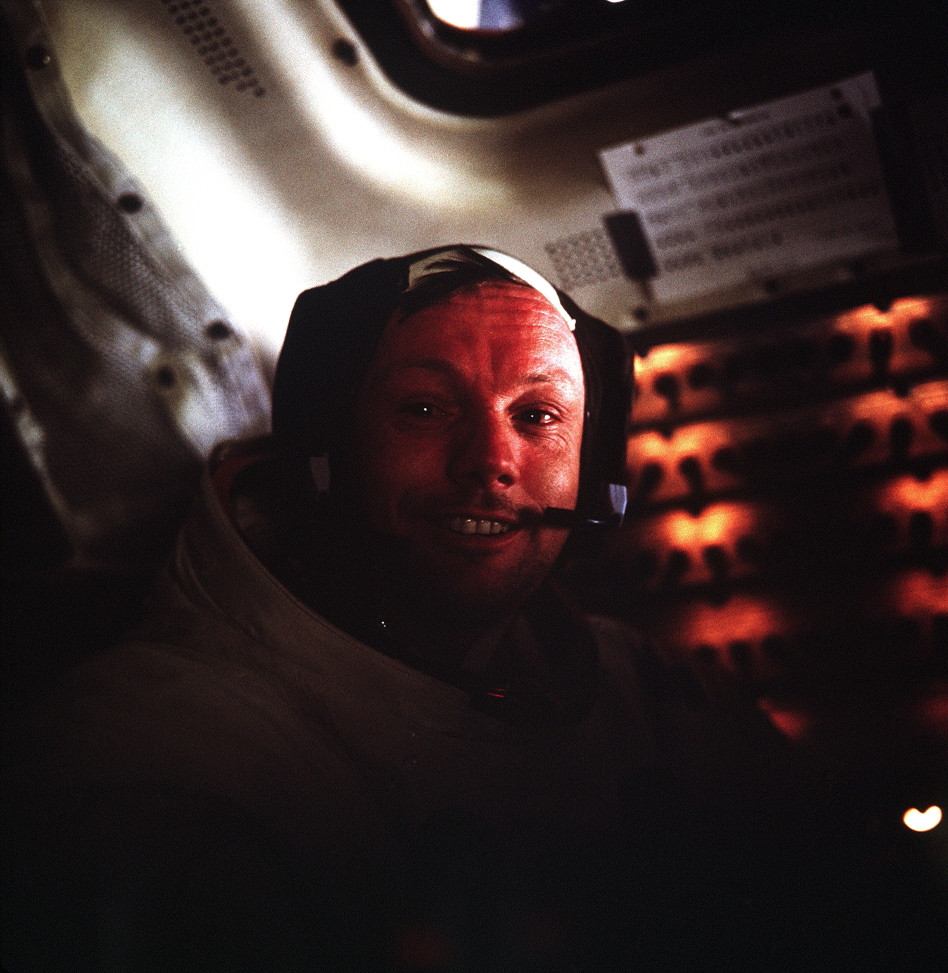 He's resting inside the LEM after his and Buzz Aldrin's historic moonwalk. He appears to be both elated and exhausted after making history in a way no other person ever has. The LEM is still parked on the Moon's surface. Just as a pilot sitting in an airplane on a taxiway is said to be "sitting on the tarmac" while awaiting takeoff, Armstrong is "sitting on the Moon" inside the LEM.

Here's a cropped and exposure corrected version released by NASA: 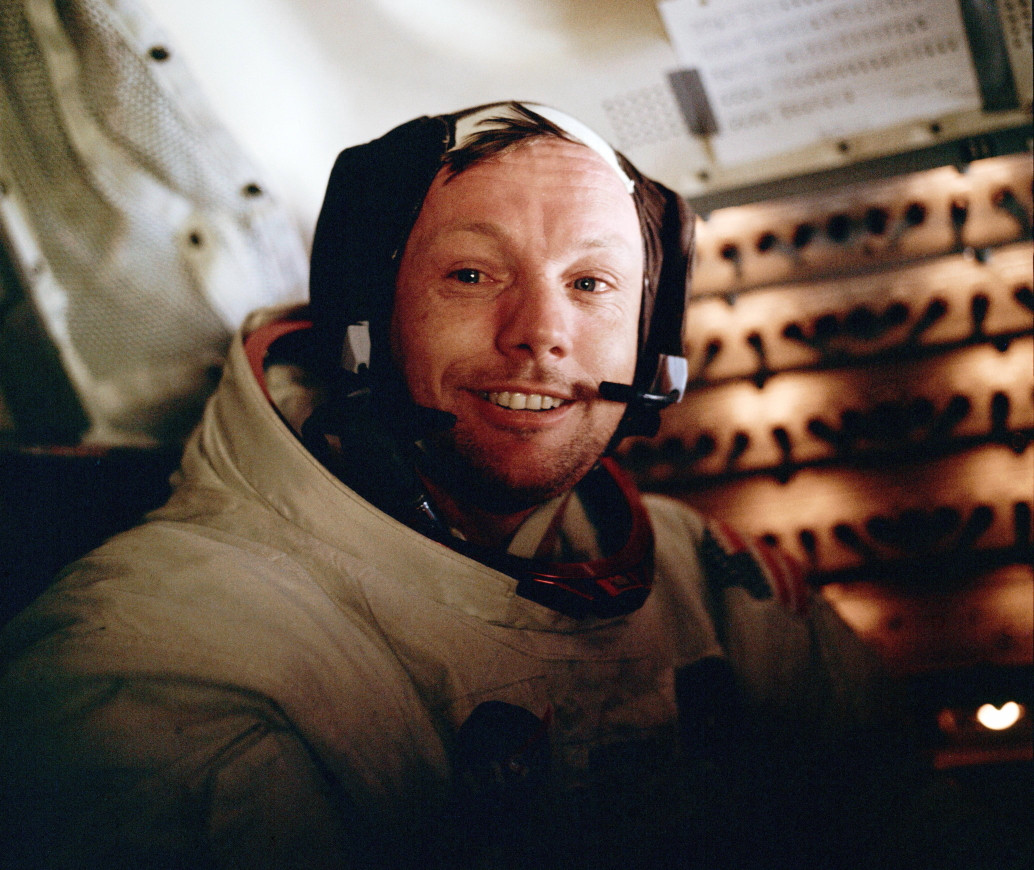 Here's a single frame from a 16mm timelapse movie that was taken by Buzz Aldrin from inside the LEM at the beginning of Armstrong's moonwalk before Aldrin also emerged from the LEM and joined Neil outside. 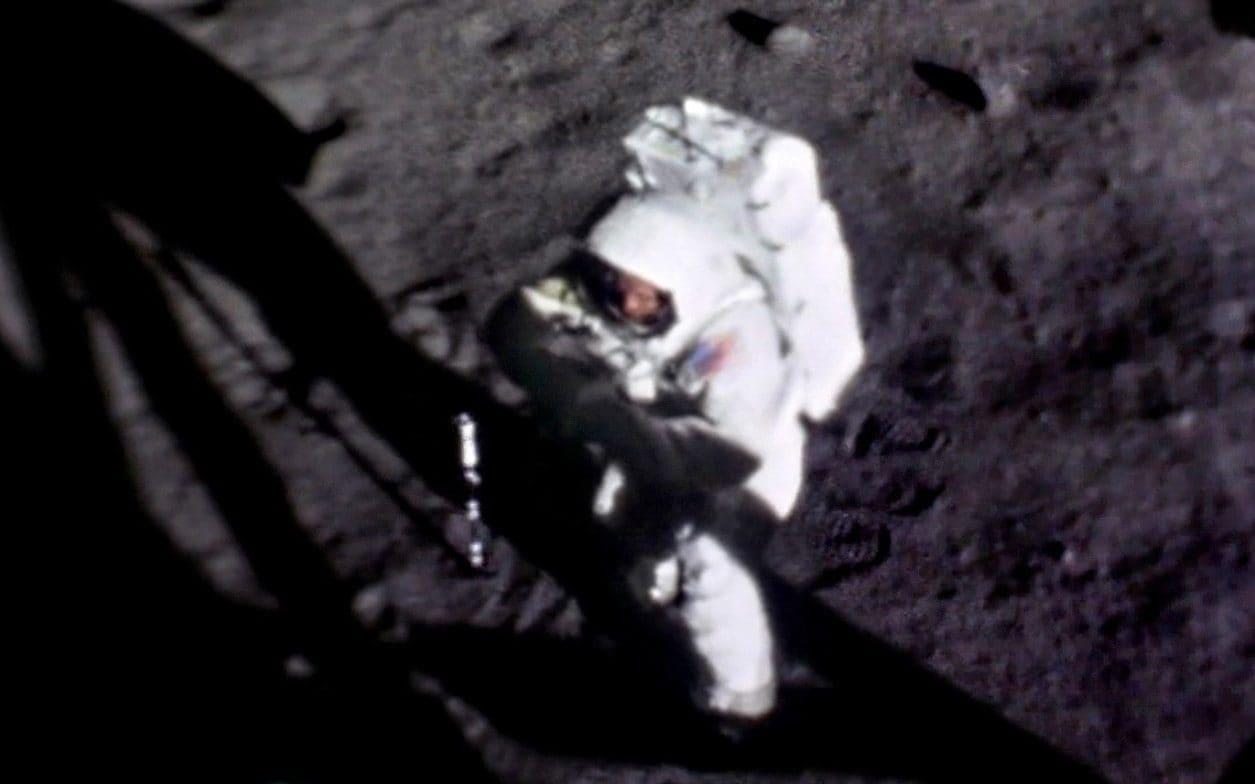 This is a frame grab from the television camera mounted on one of the LEM's lander legs that beamed a live signal back to Earth as Armstrong descended the ladder before setting foot on the moon for the first time in human history: 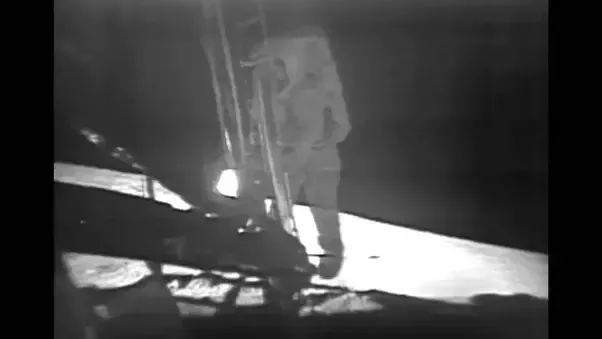 There's at least one other photo that shows a silhouette of Armstrong's helmet and part of his right shoulder in the deep shadow under the LEM in the far corner of a photo taken by Aldrin to document an equipment bay on the LEM's landing stage. 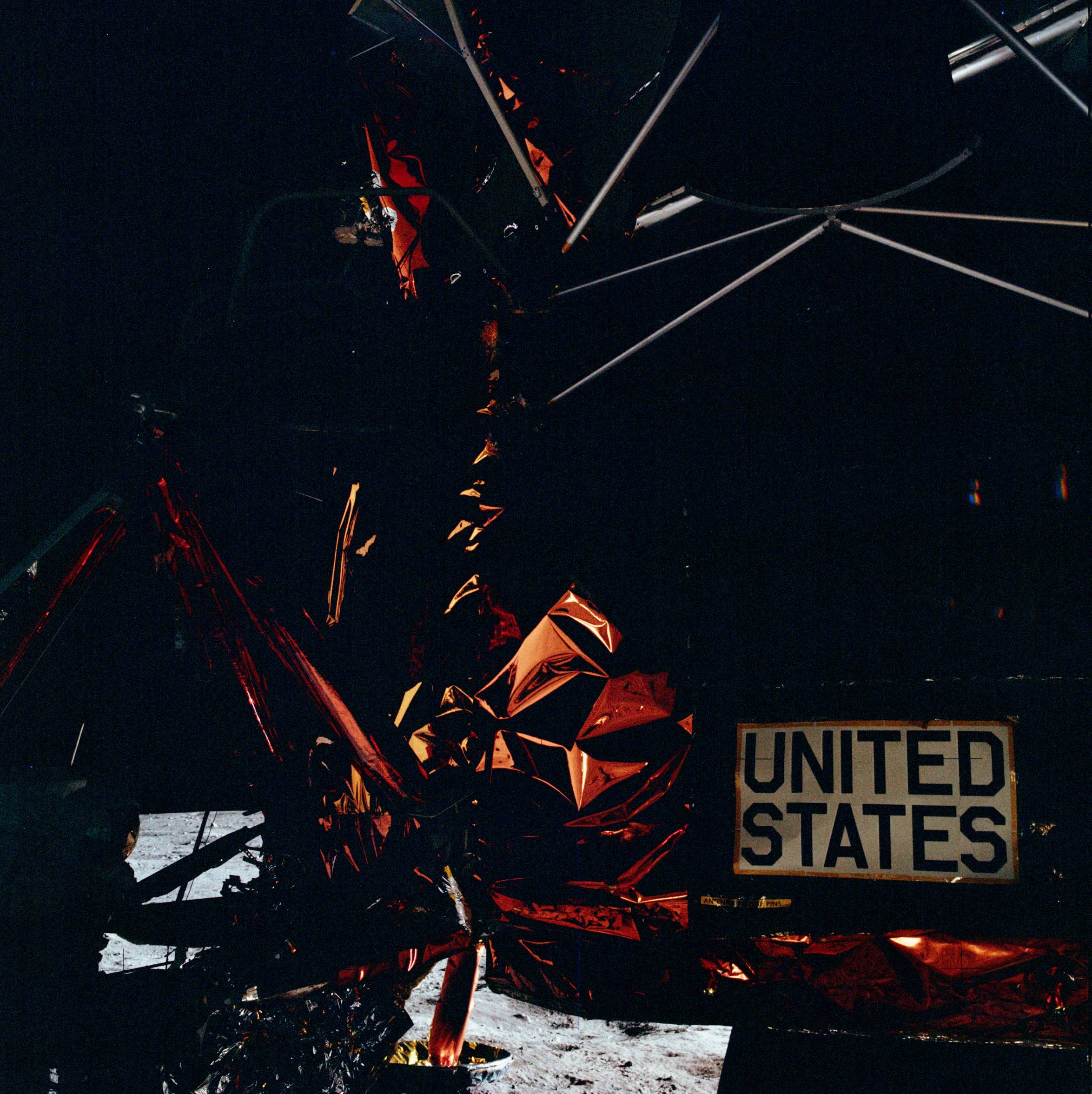 And of course, here's what is probably the most recognizable photograph in the history of the human race: 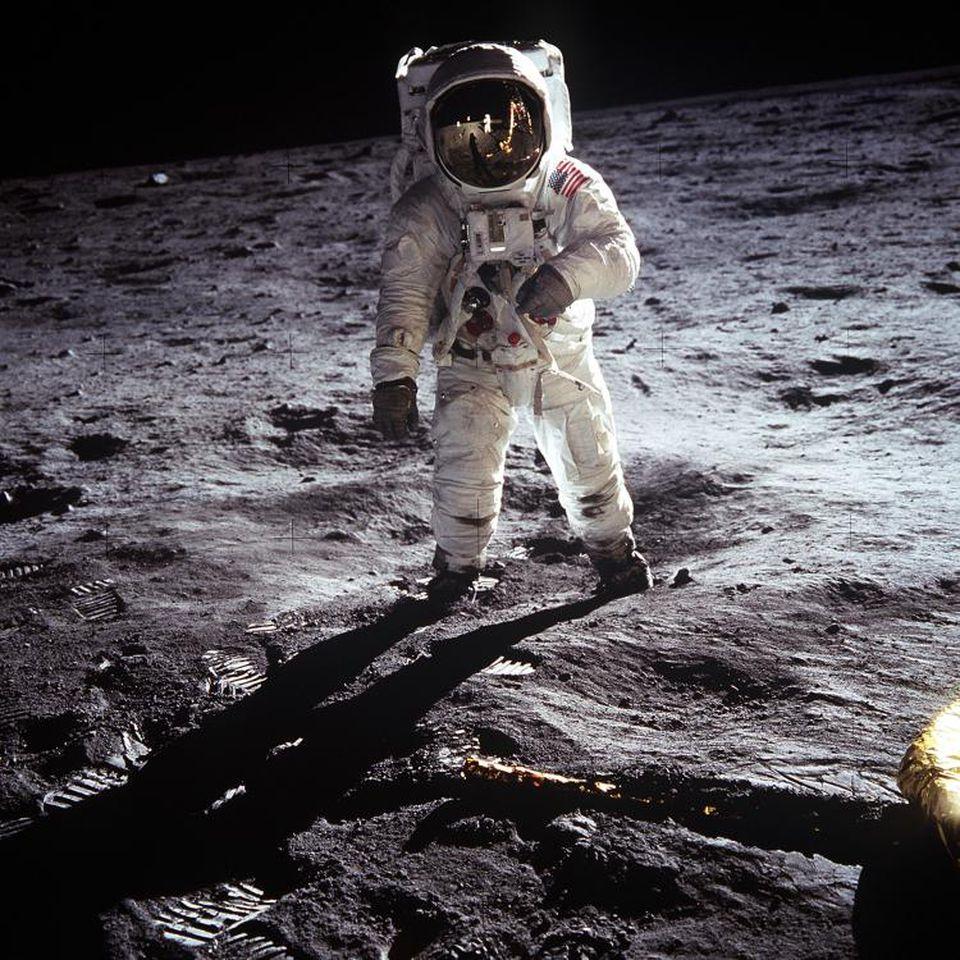 One can see a reflection of Neil Armstrong, along with parts of the LEM and some of the other scientific items they've placed on the Moon's surface around the LEM at Tranquility Base, taking Buzz Aldrin's photo on the front of Colonel Aldrin's face shield.

But that's neither here nor there.

So is this photo the only photograph that contains an image of Neil Armstrong on the surface of the Moon? 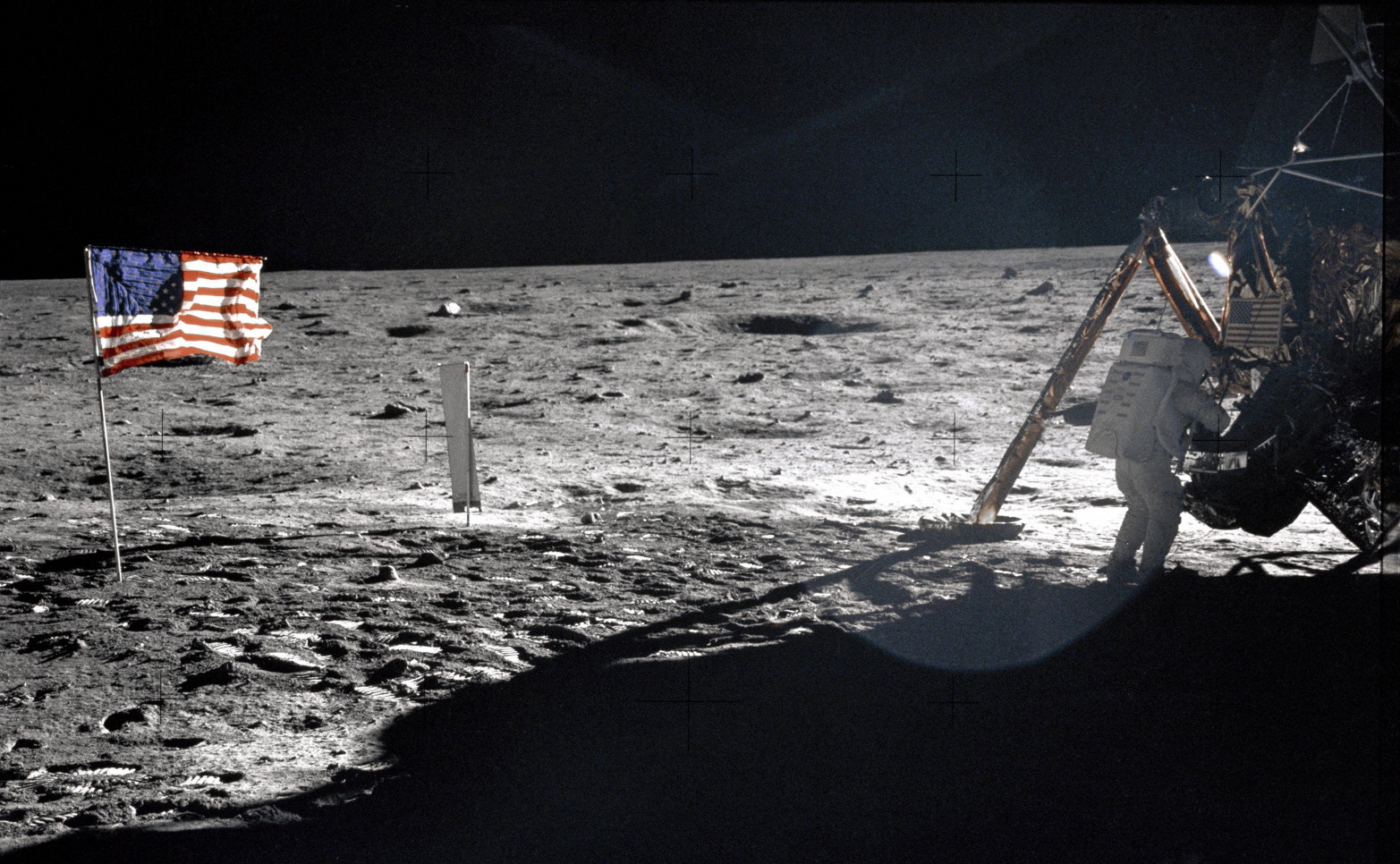 But it is the singular photograph that has been titled for over thirty years as:

"The Only Photograph of Neil Armstrong on the Moon"

From NASA (emphasis mine):

110:31:47 Rightward of 5885. This frame from Buzz's plus-Z pan is the only good Hasselblad picture of Neil on the lunar surface. Eric Nelson has produced an enhance version ( 320k ) of the portion of the image that includes the flag, the SWC, and Neil at the MESA. A closer detail ( 195k ) shows Neil packing the bulk sample with an open rockbox on the MESA table. See the discussion following 110:31:47.

For many years after the mission, NASA contended that Buzz never had the camera and, consequently, never took a picture of Neil. In fact, frame 5886 from Buzz's plus-Z pan shows Neil at the MESA. An extensive discussion with Neil and Buzz about this photo and about NASA's mis-conceptions about who had the camera at this time is linked below.

In late 1986 I was informed by Neil Armstrong's office that he believed the photo of himself in the background lay between frames 5875-5901. In May 1987 after studying a copy of the 'Apollo 11 70mm Photographic catalog' sent to him by Lee Saegesser (NASA HQ History Office) Armstrong confirmed to me that 5886 was the one.

110:34:13 This underexposed picture of the Ascent Stage shows Neil at the MESA (lower left corner). The fact that Neil is in this picture was first noticed by Apollo historian Andrew Chaikin. See, also, a detail of Neil. An enhanced version of the detail by Ulli Lotzmann shows that Neil has his side visor pulled forward and that his gold visor is up.

And at the marked time:

In 1994, Andrew Chaikin pointed out to me that Neil can be seen at the MESA in the deep shadow at the lower left in 5894. A detail shows Neil at the MESA. An enhanced version by Ulli Lotzmann shows that Neil has his side visor down and his gold visor up

Yes, this description is essentially correct in the sense that there is no other photograph like it. (The complete set of Apollo 11 photographs are here if you want to double check https://www.hq.nasa.gov/alsj/a11/images11.html)

Whether you technically consider the description 100% accurate depends on what you mean with "photograph of X in location Y". To settle whether the above claim is misleading I suggest analyzing what kind of photographs people would typically describe as a photograph of "Uncle Mike in Italy". For example, most people would not consider a photograph in which a small reflection of uncle Mike is visible in a mirror in front of the coliseum to fall in that category. Similarly, a portrait shot of uncle Mike sitting in his car without any visible clues as to the location of the car would typically not be chosen as a good example of "Uncle Mike in Italy" although technically correct. Similarly, the individual still frames of video are not generally considered as photographs, even though there is a technical definition which would include such.

Not the answer you're looking for? Browse other questions tagged photography moon space .

227
Has man walked on the Moon?
17
What is the reason that the moon appears larger on the horizon?
30
Is the Moon young?
23
Are there more mushrooms during full moon?
25
Did Neil Armstrong find aliens on the moon?
1
Is the moon artificial?
9
Do Qur'an verse counts correspond to the moon landing date and take-off time from the surface of moon?
126
Did US flags on the moon turn white?