Is there evidence that voting machines from Dominion Voting Systems miscounted millions of votes for Trump?

TL;DR: this claim is based on updates in the real-time election night data reported by news outlets, not the official vote counts reported by states and counties. There are discrepancies in the news outlet's data feed in the vote counts for all candidates, not only Trump's vote counts, and in many states, not only those using Dominion. In a similar instance, this kind of discrepancy has been attributed to a data entry error (by people working for the news/media feed, not by election officials!)

Here is a video of the claim he is referencing (via OAN). The claim is:

According to an unaudited analysis of data from Edison Research, states using Dominion voting systems may have switched 435,000 votes from Trump to Biden. Another 2.7 million Trump votes appear to have been deleted by Dominion.

OAN cites the work of an "unaudited" data analysis by an unnamed author. Here is the "data analysis" that they are citing.

The data used here is the time-series data that shows the reported vote share of each candidate and the number of votes counted in a state over time, as shown on the New York Times Election website.

The claim is based on anomalies like this one in the NYT data: 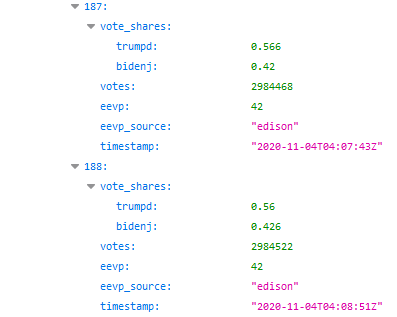 ("Approximately" because of rounding.)

The author of the claim wrote a script to find all such instances of votes "switching" from Trump to Biden (or to Jorgensen).

Incidentally, OAN (and Trump, who referred to the OAN report), misrepresented the part about "lost" or "deleted" votes. The "data analysis" counts "lost votes" any time "the total amount of votes counted decreased" from one update to the next, but unlike OAN and Trump, it doesn't say those are "Trump votes".

The entire claim is based on data that is not official election data! Here's some more information about how Edison Research collects the data for the data feed used by New York Times and other sites on Election Night:

In summary: they have many, many, people, manually entering data as fast as they can into an online system, with great potential for error. In fact, we already know of one major error that affected their Election 2020 feed.

AP has a similar process for reporting the vote on election night. A similar vote "switching" anomaly that was reported to the county that was allegedly affected, was attributed to an error in the AP election night feed:

Rock County Clerk Lisa Tollefson is pushing back against claims of vote tampering in Rock County during the Nov. 3 election.

A Nov. 9 article published by The Gateway Pundit, a conservative news and opinion website, claims that a source in Rock County observed vote totals being changed from President Donald Trump to President-elect Joe Biden, citing roughly 10,000 votes that were allegedly changed in Election Night reporting.

The article shows screenshots of Rock County results that were part of Fox News election night reporting, which were submitted by the anonymous source. The article does not include figures from the Rock County election website.

“It looks like the news outlet reported incorrect information,” Tollefson said. “That’s not the county’s website and we’re trying to figure out where the information came from and where the discrepancy came from.”

All of Pennsylvania uses some form of paper ballot:

As of the June 2, 2020, primary election, all 67 of the Pennsylvania's counties have deployed voting systems that produce voter-verifiable paper records and meet 21st-century standards of security, auditability and accessibility.

In April 2018, the Department had informed counties they must select voting systems that meet the new criteria no later than December 31, 2019, and implement the systems by the 2020 primary.

Oops! I failed to notice that the following article was about the 2018 election. However, I searched a fair amount and this was the only accessible article I could find that mentioned Dominion equipment in Pennsylvania. There were several articles that mentioned Dominion in other states for the recent election, but nothing I could find for Pennsylvania.

This article details some of the problems that were experienced during voting in Pennsylvania. They were due to accidentally voting for too many candidates, having Sharpie markers bleed through, and the like. The number of problems were reportedly relatively low.

Another question here had to do with some erroneous reporting of early ballot tallies (don't recall if any was in Pennsylvania), but that had nothing to do with the final tallies.

31
Was there a “dump” of votes in Michigan where 138,339 votes were added for Biden and 0 for Trump and does this indicate potential fraud?
148
Do vote counts for Joe Biden in the 2020 election violate Benford's Law?
6
Are these anomalies in the Biden-Trump vote data indicative of voter fraud?
71
Did a computer error lead to 6,000 votes switching from Joe Biden to President Trump?
2
Are These Legitimate Tossed-Away Votes For President Trump Found At An Oklahoma Wedding?
5
Is Shiva Ayyadurai's statistical analysis of the 2020 election evidence of widespread fraud?
3
Did Georgia absentee voting expire before the election was over?
8
Do the 2020 votes for Trump and Biden add up to more than the total number of votes made?