Is Shiva Ayyadurai's statistical analysis of the 2020 election evidence of widespread fraud?

Yesterday Shiva Ayyadurai tweeted a video in which he shows a piece of statistical evidence that he claims shows that a computer program was used to switch votes from Trump to Biden in Michigan. The explanation starts at about 18 minutes.

Is there an innocent explanation for this pattern that Shiva Ayyadurai claims to find strange? It could be the case that this trend actually does exist, and this percentage differential decreases as more people vote a straight Republican ticket, but I wouldn't expect the correlation to be as strong as it looks here.

The explanation of analysis method as shown in the video: 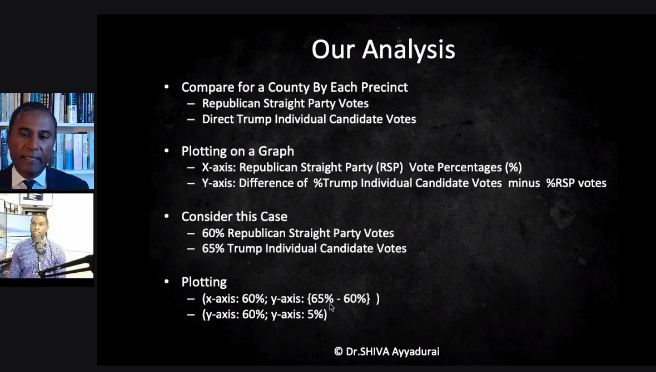 An example of what would Shiva Ayyadurai claims should be expected in a normal situation, as shown in the video: 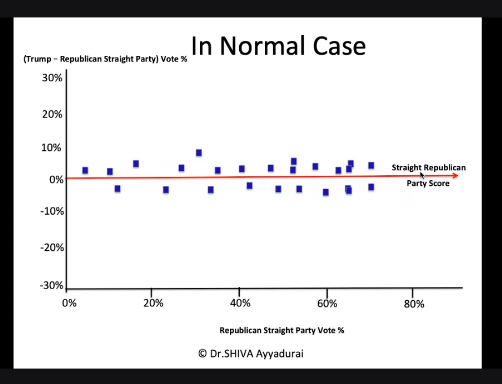 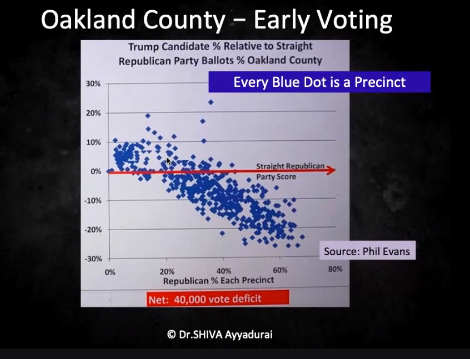 Results for both early and election day voting in Macomb County: 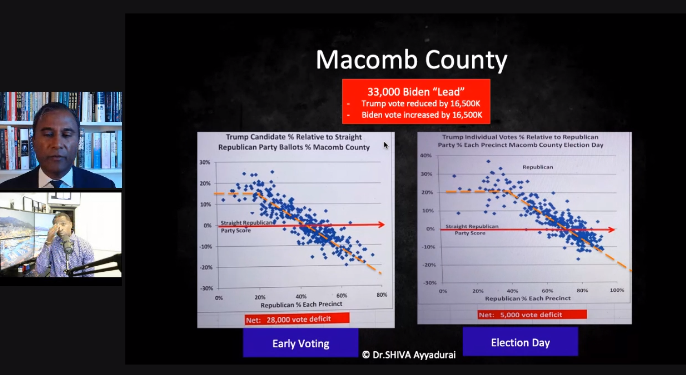 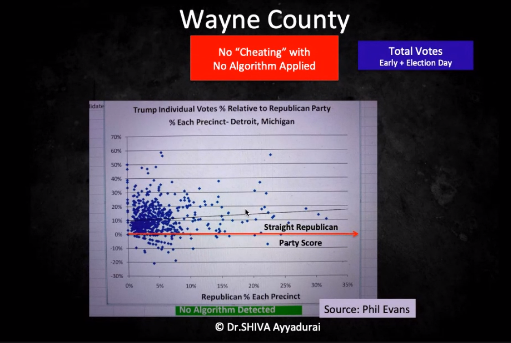 Mathematician Matt Parker did a video on this subject where he points out an error by omission (ie. cherry-picking) and an error in the analysis. When those are corrected, we see the expected strong correlation between voting by candidate and voting by party for both candidates.

If this is evidence Trump votes are being switched to Biden, we should see the opposite effect for Biden votes. Biden votes should show an upward trend.

We don't, we see exactly the same effect, just shifted upwards. The shift doesn't matter, it's the slope that does. 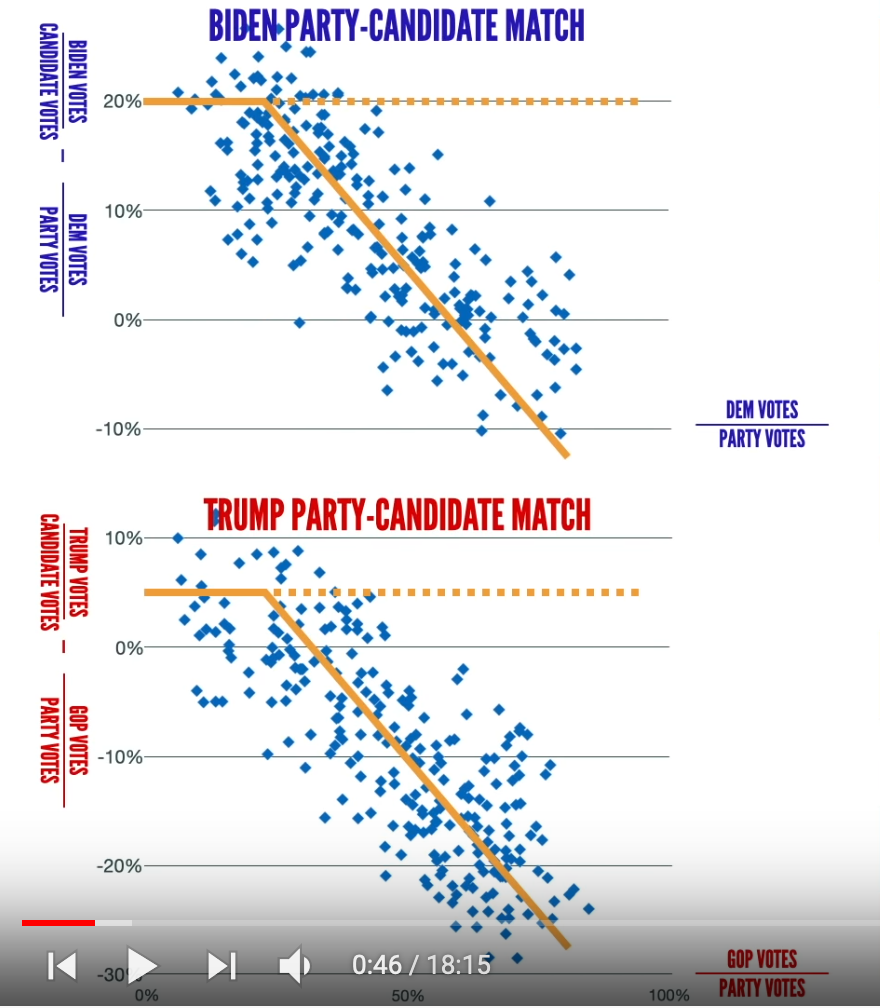 It's the slope that matters because what the graph is showing is that there is a strong correlation between candidate votes and party votes just as we'd expect, and just as Dr. Ayyadurai claims should be so, but inverted.

By showing only the Trump data, Dr. Ayyadurai is cherry-picking.

They're inverted because of an elementary error in the analysis. You cannot subtract percentages unless you're sure the population sizes are the same. Dr. Ayyadurai subtracts the percentage of Wisconsin voters who voted for Trump by party vs those who vote for Trump by candidate. You can only subtract percentages if they're based on the same size population and this is not true for Wisconsin; percentages of party vs candidate voting there varies between about 45% and 80%.

Itachi0567 provides a good example for how this can go wrong. Consider a district with 1000 votes. 997 were GOP party votes. 2 were for Biden. 1 for Trump. That means voting by party is 100% Trump, but voting by candidate Trump gets 33%. Subtract them and you get -67%. By that logic, Trump got robbed in a district where he won 99.7% of the vote. The conclusion is flawed because it assumes the two populations are the same size.

If we're looking for a direct linear correlation between two variables we expect a line. The equation is Y = MX+B. Here X is GOP Votes / Party Votes, Y is Trump Votes / Candidate Votes, and M is how strongly they're correlated. Dr. Ayyadurai used (Trump Votes / Candidate Votes) - (GOP Votes / Party Votes) for his Y-axis which is effectively Y-X. This has the effect of inverting the slope.

What should have been plotted is Trump Votes / Candidate Votes vs GOP Votes / Party Votes per district. When we do that, we see the expected strong correlation for both parties. 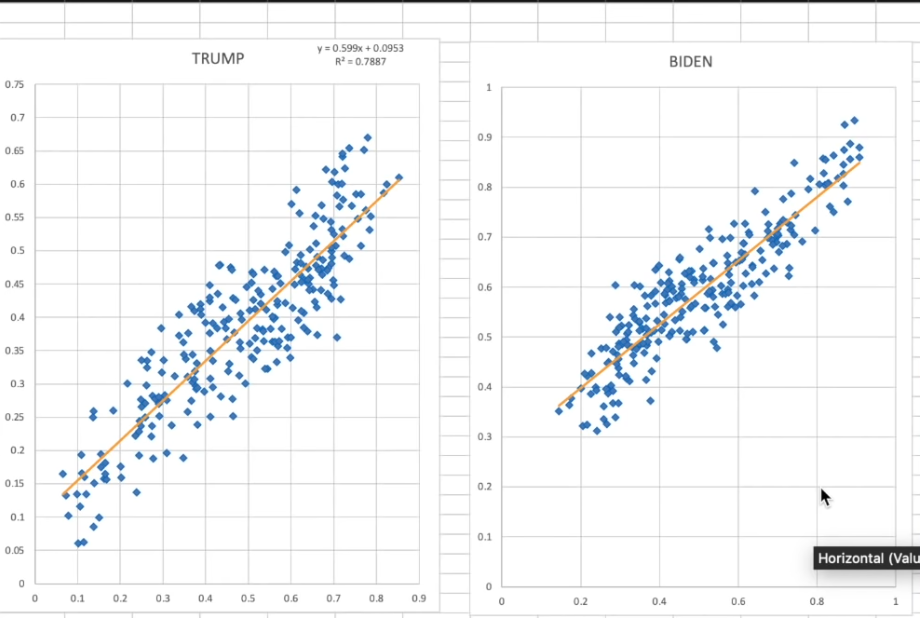 Let's acknowledge the problem with these voter fraud analyses: they are fishing expeditions and subject to confirmation bias.

These fishing expeditions are fueled by Trump's unsupported claims of voter fraud. Trump claims there is evidence, but he has repeatedly shown none. And for most people that's the end.

Some people go hunting for evidence to support the conclusion ex post facto. These people may be well meaning, but are liable to be less critical of their analysis when it yields a positive result. This is yet another example.

An honest analysis of the integrity of US election would not presume an outcome, would not be hunting to prove a claim ex post facto, and would critically review their analysis. Such analyses have been conducted again and again and find no evidence for widespread voter fraud.

So, I found this analysis. I will quote from it.

The main quantity Ayyadurai is concerned with is the difference between the % of votes for down-ballot Republican candidates vs. % of votes for the incumbent president, Donald J. Trump.

According to the good doctor, the pattern you’d expect is this flat line:

[insert here the same image present in the question. not included to prevent an overly scroll-intensive answer]

To Dr. Shiva, this discrepancy is evidence of algorithmic foul play. To him, the negatively sloped line is evidence that the state of Michigan used the weighted voting feature of Dominion vote-tallying machines to steal votes from Trump and grant them to President-Elect Biden.

The thing is, the lad is just straight-up wrong. You wouldn’t expect a flat line at all: you’d expect the negatively sloping line, exactly as we see. The guy’s just making a wrong assumption in his analysis, leading to this wild conclusion. Let’s dig into why the above flat line would not be expected.

The author then goes on making a few assumptions to replicate the results:

Some assumptions that everyone can probably agree with:

Let's model these as probabilities for downballot R candidates and for the R president like so:

Using these probabilities, we can now simulate the voting outcomes of several precincts, with the fraction of Republican vs. Democrat voters randomly generated to get a good spread.

And now we plot the difference between down-ballot Republican votes and Trump votes, just as Dr. Ayyadurai does: 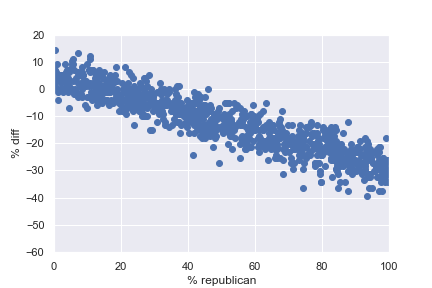 To be honest, I didn’t have to simulate a damn thing to expect the above result. We can prove that we’d see a pattern like this given first principles.

The act of dialing the percentage of Republicans up and down in a precinct is just blending these two extremes.

Let’s take a look at the extreme with 100% Democratic precincts: 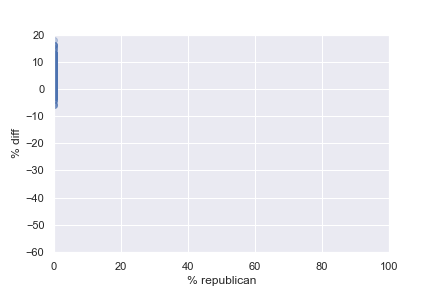 Okay, and how about 100% Republican precincts? 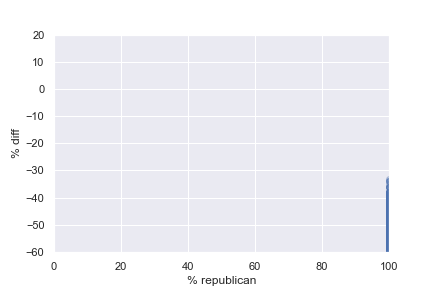 Oh weird, and what do you get when we just smear from one set of points to another, as if you were blending relative influences of each group of voters? 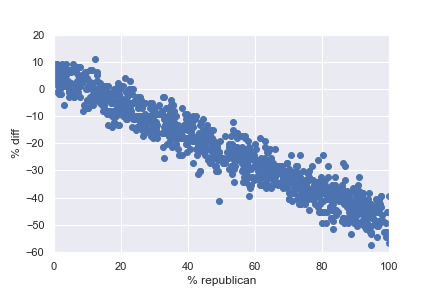 There would only be a flat line if the difference between likelihoods to vote down-ballot Republican and Republican President are exactly the same for Democrat and Republican voters. I’d never expect that, would you?

I understand that usually, discussion of clarifications of the question should be done as comments, but the massive amount of obfuscation involved in the original claim, as evidenced by you apparently not even understanding what the claim is, is an integral part of addressing the claims.

Not the answer you're looking for? Browse other questions tagged united-states us-elections-2020 .

49
Is there a "red shift" in U.S. elections — a significant shift to republican votes between polls and voting? Does this imply fraud?
30
Are there "1,071 Proven Cases of Voter Fraud"?
5
Did the CNN live election analysis show a porn site logo during broadcast?
149
Do vote counts for Joe Biden in the 2020 election violate Benford's Law?
45
Were a large number of votes from suspiciously old Pennsylvanians received in the 2020 US presidential election?
8
Did Pfizer intentionally delay the COVID vaccine until after the election?
8
Did COVID-19 kill ~5 times more people per capita in Jun-Aug 2021 in US counties that >70% voted for Trump than in those which voted <26-32% Trump?