Were a large number of votes from suspiciously old Pennsylvanians received in the 2020 US presidential election?

There have been many claims that votes were received from dead voters in the 2020 US presidentil election.

Joe Biden was so inspiring that all the 90+ year olds in Pennsylvania registered to vote this year, setting a huge record!

He follows up with examples of voters apparently born in the 1850s: 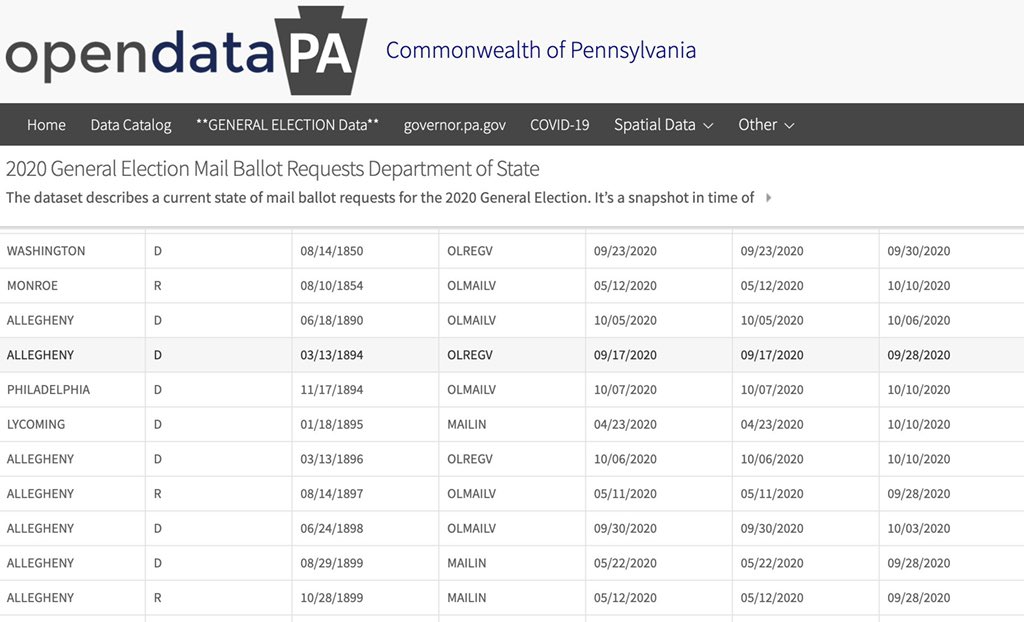 Were there a large number of votes received from registered voters that were suspiciously old?

Related question: Does this video prove that a provably dead person in Michigan voted by absentee ballot?

Although the two graphs are scaled the same as each other, they use a different scale on the left as on the right, and the data compiler has fixed the scales so that on the "Democrat counties" (top) graph the blue line is above the bars, and on the "Other counties" (bottom) graph, the blue line is below the bars.

This gives the false impression that the Democrats somehow have "dead people" voting. This is false also for other reasons:

The graphs below are redrawn so that data are separated back to different graphs, and now like is compared with like.

Second, the table of voters

The data can be seen in the public records of Pennsylvania at https://data.pa.gov/Government-Efficiency-Citizen-Engagement/2020-General-Election-Mail-Ballot-Requests-Departm/mcba-yywm/

The table in the question showing just 11 voters born before 1900 is exactly the same as the 11 voter registrations shown in the Pa. data table, when ordered by DOB. So here is the source.

The table is headed

and the column headings support that. The second column (not shown by OP) is

which reveals that of the 11 records selected 3 were Republican and 8 were Democrat. This suggests the reason for them may have nothing to do with fraud attributable to any party.

There is also a group of records dated 1/1/1800, again with a variety of party designations. The reason for these is clearly administrative: the web page states that 1/1/1800 is used as a placeholder for privacy reasons.

Considering how few registered voters there are who are unreasonably old, the reason is far more likely to be clerical than fraudulent.

The data is about mail-in votes. It is well known that the number of mail-in votes has increased dramatically this year due to covid-19, and it is also known that Republicans were dissuaded from voting by mail. Here is one report from npr dated August 2020.

So this is where the apparent big increase comes from: mail-in registrations. Although the graphs are for the over-90s, I expect that there is an increase across all age ranges in 2020.

Back to the question: Were a large number of votes from suspiciously old Pennsylvanians received in the 2020 US presidential election?

The table posted in the question, showing 11 very old voters, is taken from the public records of Pennsylvania. When ordered by date of birth, it exactly matches.

The data shown is for registered mail voters. Here is a chart by age of voter.

I found a few anomolies, for example one voter was born on 7 May 2020 and there is one other minor. Also ignored are those with DOB 1/1/1800 (or none) which is for privacy reasons. The number of age 100+ voters is vanishingly small.

The chart clearly shows the claim that there are a disproportionate number of unreasonably old voters, or aged 90+ voters, to be false.

What it does show is that there were more Democratic mail-in voters than Republican.

150
Do vote counts for Joe Biden in the 2020 election violate Benford's Law?
-6
Does this video prove that a provably dead person in Michigan voted by absentee ballot?
6
Did voter registration rates exceed 100% in many counties for the 2020 US election? Did this lead to voter fraud?

6
Were there 1 million fraudulent votes in the 2012 US election?
26
Were 3 million votes cast by non-citizens in the 2016 US presidential election?
150
Do vote counts for Joe Biden in the 2020 election violate Benford's Law?
6
Are these anomalies in the Biden-Trump vote data indicative of voter fraud?
5
Is Shiva Ayyadurai's statistical analysis of the 2020 election evidence of widespread fraud?
7
Do the 2020 votes for Trump and Biden add up to more than the total number of votes made?
8
Did COVID-19 kill ~5 times more people per capita in Jun-Aug 2021 in US counties that >70% voted for Trump than in those which voted <26-32% Trump?