It is claimed by Rickova and Irsova, in a paper titled "Publication Bias in Measuring Climate Sensitivity" [A], that:

We present a meta-regression analysis of the relation between the concentration of carbon dioxide in the atmosphere and changes in global temperature. The relation is captured by “climate sensitivity”, which measures the response to a doubling of carbon dioxide concentrations compared to pre-industrial levels. Estimates of climate sensitivity play a crucial role in evaluating the impacts of climate change and constitute one of the most important inputs into the computation of the social cost of carbon, which reflects the socially optimal value of a carbon tax. Climate sensitivity has been estimated by many researchers, but their results vary significantly. We collect 48 estimates from 16 studies and analyze the literature quantitatively. We find evidence for publication selection bias: researchers tend to report preferentially large estimates of climate sensitivity. Corrected for publication bias, the bulk of the literature is consistent with climate sensitivity lying between 1.4 and 2.3C.

Is this true? A paper titled "No evidence of publication bias in climate change science", written by Christian Harlos, Tim C. Edgell & Johan Hollander [B], appears opposed, but finds that while

Our meta-analysis did not find evidence of small, statistically non-significant results being under-reported in our sample of climate change articles

it did find the following:

However, our meta-analysis did find multiple lines of evidence of biases within our sample of articles, which were perpetuated in journals of all impact factors and related largely to how science is communicated: The large, statistically significant effects were typically showcased in abstracts and summary paragraphs, whereas the lesser effects, especially those that were not statistically significant, were often buried in the main body of reports. Although the tendency to isolate large, significant results in abstracts has been noted elsewhere (Fanelli 2012), here we provide the first empirical evidence of such a trend across a large sample of literature.

We also discovered a temporal pattern to reporting biases, which appeared to be related to seminal events in the climate change community and may reflect a socio-economic driver in the publication record. First, there was a conspicuous rise in the number of climate change publications in the 2 years following IPCC 2007, which likely reflects the rise in popularity (among public and funding agencies) for this field of research and the increased appetite among journal editors to publish these articles. Concurrent with increased publication rates was an increase in reported effect sizes in abstracts.

and also shows in Figure 3: 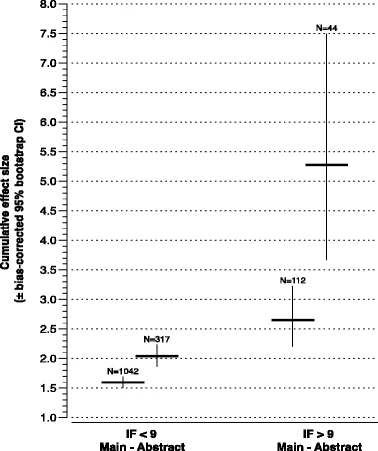 that when their sample includes all journals (which is required per their above finding that journals with a high impact factor selectively publish larger results), the Climate Sensitivity is estimated at 1.6C per doubling of atmospheric C02.

PS: I found this blog to give a better overview of the claim than I can: http://grokinfullness.blogspot.com/2017/04/publication-bias-in-climate-science.html

Going to try to expand some things from the comments into a full answer.

The paper in question was published in Energy & Environment in 2015. It's since been cited 7 times, mostly by a T Havránek who closely collaborates with the paper's authors. While obviously it's important for Skeptics to consider claims on the object level, on the meta level this is a single paper published in a small-time journal (Impact factor of ~1.7 according to SAGE) that has a reputation for publishing shoddy climate 'skeptic' papers, and the paper has since essentially been ignored.

Some examples of shoddy papers E&E has published are a paper that claims the sun is made out of iron, and a paper claiming wild variation in atmospheric CO2 concentrations just prior to the modern instrumental era. While almost every journal has bad papers get through from time to time, these specific papers are so far beyond the pale they shouldn't have passed any reputable peer review process, and there are a lot more where they came from. The short version is that there are very good reasons to be skeptical of the validity of the paper.

The second paper the blog post notes - No evidence of publication bias in climate change science - is not addressing precisely the same question as the former paper. From the paper:

For the purpose of our meta-analysis, we sampled articles from the body of literature that explores the effects of climate change on marine organisms.

All the results included in the sample that paper took are about the response of marine organisms; not about climate sensitivity.

The biases that they found and you note are not the kinds of biases the initial paper is discussing:

That is, papers tended to report more significant results more prominently than less significant results - their abstract would say "We found increased temperature harmed coral growth (effect size Very Big, Quite Significant)", and then page 10 would say "We found increased CO2 concentration reduced shell growth rates (effect size small, not very significant)". This is a bias, but it isn't not reporting bad results, which is what the initial paper alleges.

First, there was a conspicuous rise in the number of climate change publications in the 2 years following IPCC 2007, which likely reflects the rise in popularity (among public and funding agencies) for this field of research and the increased appetite among journal editors to publish these articles. Concurrent with increased publication rates was an increase in reported effect sizes in abstracts.

So this is just saying that after 2007 there was a significant increase in the number of papers published addressing issues they sampled, and that effects discovered by those papers were larger. You could allege that scientists started hyping up their results to get kudos in the next big thing, but it's more plausible that increased funding and more people moving into the field allowed scientists to do better research so they got better results.

"Better results are published in more prominent journals". This is entirely normal and unsurprising. It'd be nice from a pure-empiricism perspective if negative results were more prominent, but in the meantime you don't get published in Nature unless you've got a big result.

The graph you post from the paper is not a graph of climate sensitivities in published papers. It's a graph of effect sizes found in papers looking at the impact of climate change on marine organisms. The measure of effect size they used is Hedge's d:

Hedges’ d was the mean of the control group (X C) subtracted from the mean of the experimental group (X E), divided by the pooled standard deviation (s) and multiplied by a correction factor for small sample sizes (J).

This graph is fundamentally just demonstrating that bigger effects get published in larger journals, but smaller effects are more common.

So is there publication bias in climate sensitivity estimates?

I'm skeptical, for a few reasons:

The appendix to the paper lists the papers used to construct the funnel plot; there are only 16! This is significant because it means that a few 'weird' papers can significantly skew the results. And weird papers we might have, because their sample includes Scafetta 2013a and 2013b, which are ECS estimates in much the same way saying "I guess ECS is about 3" is an ECS estimate. You can find some analysis of some of Scafetta's other work here and here; all of his papers on climate change are essentially the same. They're all numerology.

Lindzen and Choi 2011 is another paper included which is considered pretty questionable.

These three papers are notable for presenting extremely low climate sensitivity estimates (Lindzen and Choi 2011 estimates 0.7!), with inappropriately 'precise' results due to terrible methodology. In the small sample of papers, this has a significant effect on the observed funnel, making it look like there are very precise papers with very low sensitivities.

Climate sensitivities are not normally distributed

The funnel plot methodology implicitly assumes that the 'funnel' of results will be distributed normally around the true result. As the paper discusses:

But climate sensitivity is bounded from below by physics; there is extremely strong agreement that the no-feedback sensitivity is about 1c. A sensitivity below 1c would then imply a stable climate, which is extremely physically implausible in light of, for example, ice ages. A more quantitative version of that argument implies sensitivities below ~1.5 are extremely unlikely. This explanation by SkepticalScience includes a number of estimates of climate sensitivity; you can see that essentially none have a lowerbound below 1.5c. This pretty much requires the left edge of the funnel to be missing. There's some discussion about this issue here. 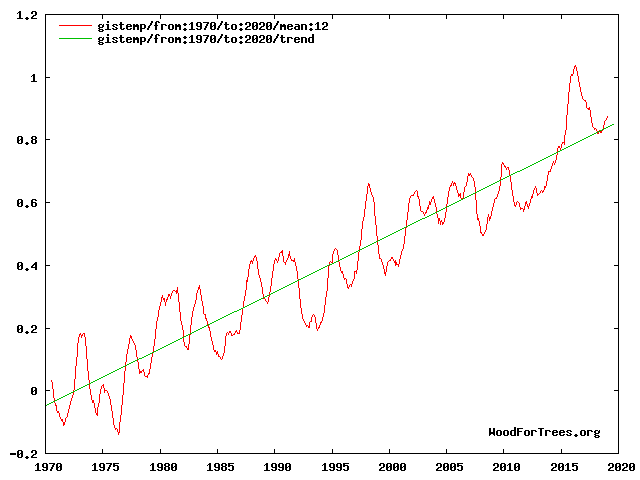 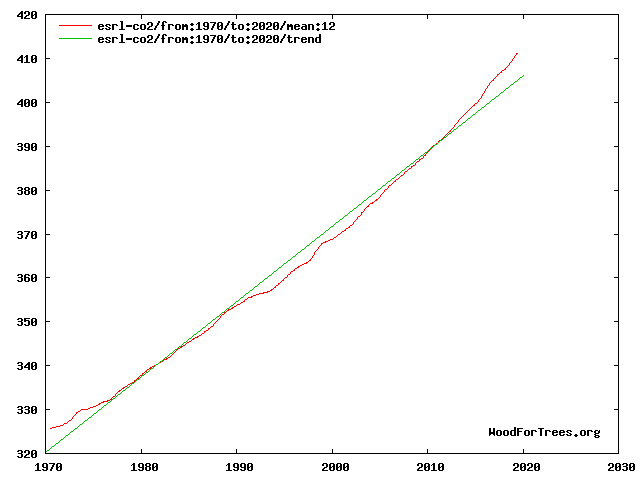 This increase in CO2 is ~35% of the effect of a CO2 doubling (ln(415/325) / ln(2) ~= 0.35). The implied ECS is ~2.3c, and the actual equilibrium response is expected to be larger than the transient response. It is difficult to justify ECS estimates lower than what we've actually seen!

18
Could Global Warming be good for life?
4
Do the Sage Journals use a pay-for-publication model (such as Bentham Open)?
13
Are the IPCC climate change models overestimating sensitivity to carbon dioxide?
20
Is "peak wind" coming?
4
Does physics give a climate sensitivity to carbon dioxide of about 3°C?
7
Are the latest estimates of the cost of climate policy five time higher than the projected benefits?
4
Does each doubling of CO2 cause a 2-4°C increase?
6
Is climate change causing more storms and worse storm damage?