Is time of the year a factor on the risk of catching a common cold?

Most people have heard the phrase "summer cold." Is there any truth to the concept that people are more prone to the common cold during summer months? More generally, is there any particular (preferably specific) time of year that people are more susceptible, outside of "winter" (given the discussion on Does being cold increase your chances of catching the common cold?)?

As far as the summer cold is concerned, it seems there's some thought that people's allergy symptoms are incorrectly attributed to a cold (MedicineNet, a CNN article from last year), but it seems likely that those conditions would also be present in the spring.

Severe cases of common cold cause set of symptoms know as "influenza-like illness".

There is no doubt, that "flu-like" is seasonal, with peak just past mid-winter. This can be clearly seen from effect of collaboration between CDC and Google, Google Flu Trends.

Scientific basis on these studies are described in this Google Research paper, which has been originally published in Nature.

(I'm going to do a subtle bait-and-switch in my answer, so I can match the evidence I found! Watch for it, and vote accordingly.)

People use the term "cold" and "flu" rather loosely. The generic term of Influenza-like Illness covers both influenza, common colds (caused by a number of different viruses) and other causes. I assume "summer cold" applies to all of these.

Influenza itself, is seasonal:

In the Northern hemisphere, winter is the time for flu. The timing and duration of flu seasons vary. While flu outbreaks can happen as early as October, most of the time influenza activity peaks in January or later. The figure below shows peak influenza activity for the United States by month for the 1976–77 through 2008–09 influenza seasons. The month with the highest percentage of cases (nearly 50%) was February, followed by January with 20% and March and December, with approximately 15% of all cases. 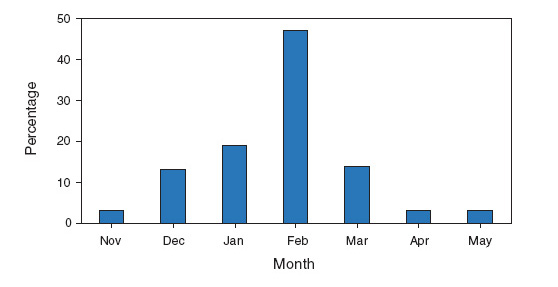 The source for this is the US Center for Disease Control. They are an authoritative source for disease information, but their information is poorly cited on their web-site.

(The bait-and-switch was that the OP asked about common colds, I generalised to Influenza-like Illness, and then gave evidence about Influenza alone. I should only get away with this if you agree that Influenza fits as one of the key diseases referred to under 'Summer Cold'.)

What is called a "cold" isn't even well defined and can be caused by many viruses. However there are several indications that infection is much more common in the winter. Explanations for this range from the drier air found in heated homes, to the increased density inside, and the US school calendar.

However the wide range speculation by multiple reputable sources indicates that this is something we are far from understanding with any certainty.

Spam prevention restricts the number of sources I can post.

Not the answer you're looking for? Browse other questions tagged medical-science common-cold .

1
Do changes in weather make people more likely to get sick?
163
Does being cold increase your chances of catching the common cold?