Was SIDS unheard of before "modern vaccine schedules"?

Related: Paper correlating number of vaccines given with infant mortality rate for many countries?

The same paper in the related article above states (abstract HERE/full text HERE):

Prior to contemporary vaccination programs, ‘Crib death’ was so infrequent that it was not mentioned in infant mortality statistics.** In the United States, national immunization campaigns were initiated in the 1960s when several new vaccines were introduced and actively recommended. For the first time in history, most US infants were required to receive several doses of DPT, polio, measles, mumps, and rubella vaccines. Shortly thereafter, in 1969, medical certifiers presented a new medical term—sudden infant death syndrome. In 1973, the National Center for Health Statistics added a new cause-of-death category—for SIDS—to the ICD. SIDS is defined as the sudden and unexpected death of an infant which remains unexplained after a thorough investigation. Although there are no specific symptoms associated with SIDS, an autopsy often reveals congestion and edema of the lungs and inflammatory changes in the respiratory system. By 1980, SIDS had become the leading cause of postneonatal mortality (deaths of infants from 28 days to one year old) in the United States.

Is this true? Basically, it seems to say that we went through a progression from:

Is this accurate? Were these sorts of deaths "unheard of" before contemporary vaccine schedules (pre 1960s)? Was there an upheaval of "crib deaths" timed with an increase in vaccinations, such that it led to a standardized name/description from health agencies? Are there any alternative views to what led to the increase?

First of all, the rise in any particular cause of death requires that this cause of death is generally accepted as a cause of death by those who write the death certificates. Most of the rise in SIDS that came as you notice in the wake of vaccinations, come because terms like crib death and SIDS didn't exist before, and became gradually more accepted during this time. Causes of death are subject to trends and fashions too. (ref)

So why does this arise after vaccines? Well, the rise of crib death does not come from a rise in babies suddenly dying for unknown causes, it comes from a decline in babies dying. Child mortality had declined from 400 in 1000 to 3-8 in 1000 in the rich countries since 1800.

Yes, 200 years ago, 2 of every 5 kids would die before they reached 5 years of age. That children died was so normal that nobody outside the immediate family would really take much notice. And the amount of reasons were so many and so badly understood that nobody would be surprised that a child died for no apparent reason. And much of this decline came about because of vaccines! Still in the 50's 30 out of every 1000 children would die before 5 in the USA, four times as many as now.

The result is that now, thanks to better hygiene and general vaccinations it is now very unusual when babies die. And parents nowadays want to know why their baby died. 200 years ago, there was no why. It was gods decision. He picked 2 out of 5, and that was that. But now both parents and doctors get frustrated when they can't find out why, because that means that can't prevent it in the future. So since the 50's when there is no obvious cause, you start noting that there is no obvious cause, and hence you get a rise in unexplained SIDS / cot death /crib death, up until it's general acceptance of the condition in the 1970's. Since the mid 80's the rate has been sinking, as the problems causing this are getting better understood, and recommendations to not smoke and put the baby on it's back has taken hold. That sinking rate could not have happened if vaccines was the problem. 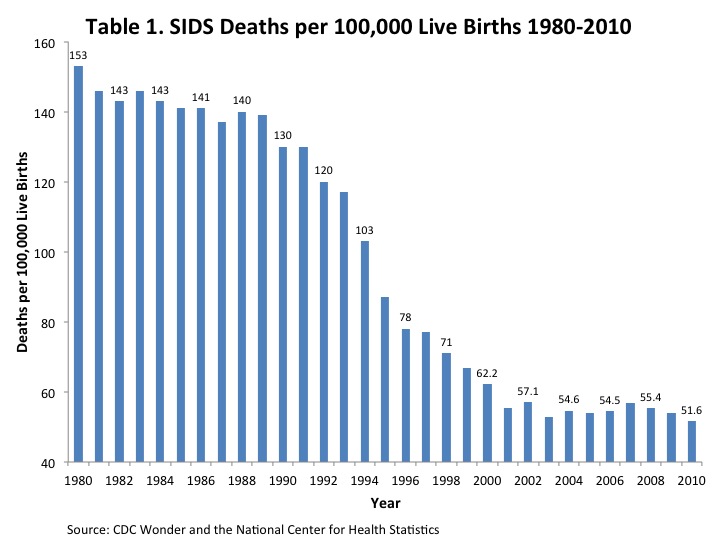 So it is related to vaccines, but in the completely opposite way from how the conspiracy people think it is. :-)

Not the answer you're looking for? Browse other questions tagged medical-science children vaccines .

43
Is the number of childhood vaccines correlated with infant mortality?

43
Is the number of childhood vaccines correlated with infant mortality?
16
Is the Fukushima disaster causing an increase in infant mortality on the west coast of North America?
11
Are hepatitis B vaccines for newborns safe and cost-effective?
9
Recommendation of the Canadian Paediatric Society to never clip tongue ties for breastfeeding
12
Did 25 people die because of H1N1 vaccine of 1976?
4
Would measles be no great health risk in the US, even without vaccines?
12
Does flu vaccine make us more vulnerable to COVID-19?
87
Do COVID-19 vaccines cause two deaths for every three deaths they prevent?
15
Can vaccinating for COVID-19 cause a selection pressure for more virulent strains?