Did Uganda's president Yoweri Museveni hand the national flag to intercessors in 1997 in the midst of a Christian revival?

World Trumpet Mission, an international revivalist ministry founded in 1988 in the Republic of Uganda by John Mulinde, presents the following historical timeline on their website (emphasis mine): 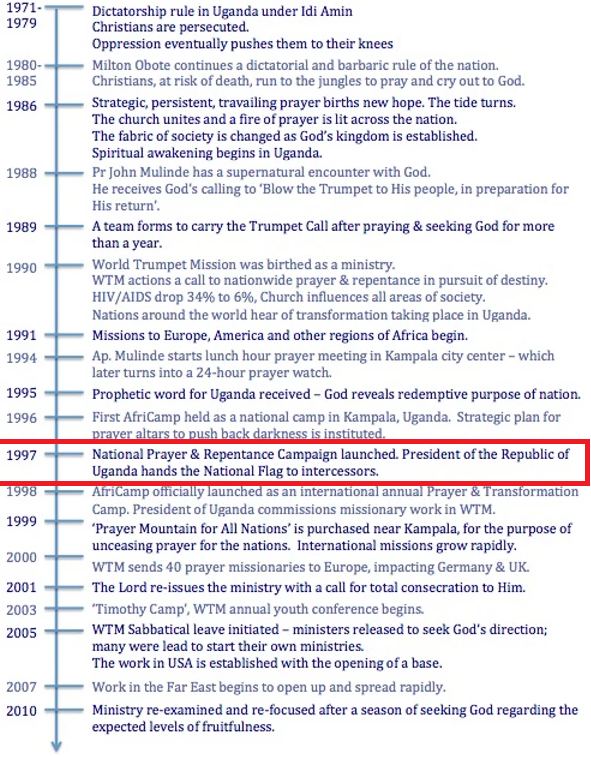 In particular, the timeline claims that in 1997, after an alleged National Prayer & Repentance Campaign, the President of the Republic at the time, Yoweri Museveni, handed the national flag to intercessors (with the implied purpose of praying for the nation).

In an attempt to cross-check the claim with other sources, I came across other sites making complementary claims. For example, this site talks about an alleged Revival in Uganda, and claims:

On New Year's Eve, 1999, President and first lady Museveni joined a huge stadium celebration where a public proclamation was read in which they covenanted with God for the land of Uganda to be used for the next 1,000 years for the purposes of God and the Lordship of Jesus Christ.

New covenant with the living God

President Museveni repealed Amin's Islamic covenant, and gave the national flag to a group of intercessors as a prophetic symbol during a conference, re-dedicating the nation to the God of the Bible. That broke the dam.

And this one, although it disagrees on the date, makes a similar claim:

From this prophecy the Mulinde-led National Prayer and Fasting Campaign was born. The main focus of this movement, aimed at "praying into place God's principles of nation-building," has been the AfriCamp, a massive prayer rally held annually and usually attended by the president.
As a result, all of Uganda joins in prayer and fasting at the beginning of every year, meeting in public places around the country and standing against the dark forces arrayed against the nation. In 2000, the people and the president, who was flanked by his entire cabinet, made a covenant with God to renounce idolatry and witchcraft. The president handed over the national flag to the assembled ministers, symbolically turning the nation over to God.

It's hard to verify that that particular event happened exactly as described, but frankly the details seem of pretty obscure relevance as to be covered much by biographies... especially given all the other religious-political aspects of Museveni's rule.

Museveni has often enough invoked religion in his political actions & arguments, e.g. "announced a national day of anti-coronavirus prayer" or more controversially (implicitly) compared himself with Jesus in how he described the "betrayal" of some religious leaders who called for greater democratization of Uganda.

As far as participation in rituals goes, he definitely publicly participated in Christian ceremonies like in this one from 2013, in which you can see the flag of Uganda draped on the pulpit. Towards the end he says stuff like

I renounce all the satanic influence of this nation. And hereby convenant Uganda to you [...] Amen.

23
Did Malian sailors reach the Americas in 1311 CE?
4
Did Food Prices Spur the Arab Spring?
36
Did fewer Jews die of the Black Plague because of ritual washing?
13
Did Christian soldiers commit the first recorded suicide bombing?
6
Did Muslims in the Middle East cut off the breasts of Christian women?
10
Did Betsy Ross make the first US flag?
11
Did the Christian Democratic Union of Germany (CDU) post this advert in Turkish?