Has China eliminated local transmission of COVID-19 within its borders?

Many sources assert that China appears to have eliminated COVID-19 within the country, except for the odd imported case or cluster, which is quickly isolated and eliminated. For instance, Worldometer's coronavirus tracker, based on data provided by each country's government, shows no new cases for months.

After months of travel restrictions and citywide testing drives, locally transmitted cases of the virus in China are near zero, according to official data.

China has no new infections of the coronavirus domestically for the first time since the start of a crisis that has sickened over 80,000 Chinese people.

Some sources were saying the same thing back in March, although I think there has been an outbreak in Beijing since then.

On the other hand, there seems to be some cause for skepticism. For instance, New Zealand is an island with a relatively sparse population, which closed its borders to virtually all foreigners in the middle of March, in fact before China did the same, and imposed a strict lockdown. However, after a period of weeks or months with no new registered cases, new cases cropped up, whether imported or latent in the population.

Accepting that China has more experience with pandemics and was able to take stricter and earlier measures in some aspects (such as the confinement of Wuhan), it seems unusual that a continental country with a sixth of the world population and with more borders than almost any other country, including with India and Russia, which have many cases, could completely eliminate the pandemic, especially considering that some infections were imported after the apparent elimination of local transmission. All that while being the probable origin of the infection, with undetected community transmission for as much as three months before identifying the virus. China has done extensive testing, but even assuming complete governmental honesty, said testing may not fully account for the incidence in undertested regions, possibly predominantly rural. This certainly provides reason to doubt the claim.

Further, it appears that the Chinese government is reporting some data that may not be included in Worldometer's statistics. For instance, one article mentioned previously was published on the 23rd of August, and indicated that China had reported seven days without local transmission the previous Sunday. However, the last set of new cases shown on Worldometer is from July 31.

Has China managed to eliminate coronavirus infections within its borders?

TL;DR: According to Chinese official reports, China has essentially eliminated local transmission. This is consistent with reports from international news (reporting widespread tourism in China) and academia (a mathematical model of the Chinese lockdown; researchers having to test vaccines in other countries). Up-to-date coronavirus news in China is in Chinese, and the language barrier likely inhibits promptly updating the unofficial Worldometer website. Outbreaks like in Beijing and Xinjiang are widely reported so people get tested. (And if there were local transmission in China, the infected would simply tell people.)

Worldometer's coronavirus tracker, based on data provided by each country's government...

Worldometer is not an official data repository (despite its popularity); it's was made by some guy (Andrey Alimetov) in the USA; more reliable sources are the ECDC and ArcGIS. Worldometer certainly doesn't have pinpoint accuracy; see e.g. Max Roser taking to Twitter to criticize its accuracy.

Further, it appears that the Chinese government is reporting some data that may not be included in Worldometer's statistics.

The Chinese government does not report to Andrey Alimetov so he can update his website. Instead, anonymous sources search the web and add it to Worldometer. There's likely a language barrier inhibiting updating Worldometer; they only seem to list English-language sources.

News from the 7-th October reports 53 consecutive days of no local transmission: 11 imported cases (of which 8 are asymptomatic). If we're not trusting such news, then we're talking about a major cover-up. This is impractical for multiple reasons, e.g.:

There are also relevant points in academia:

...it seems unusual that a continental country with a sixth of the world population and with more borders than almost any other country, including with India and Russia, which have many cases, could completely eliminate the pandemic...

While China has many neighboring countries, all arrivals have mandatory testing and 2-week quarantine. (I've been told by friends this is at the traveler's expense; ~600 yuan per night, plus hotel meals.)

And I think it's fair to say that China is simply further ahead in the timeline: China's lockdown started in January, a few months before most other countries.

Update: My Chinese teacher brought my attention to a current outbreak in Qingdao. The most recent news (from 5 hours ago) is this where the Qingdao Municipal Health Commission report 3 newly discovered cases from yesterday, and discovered 9 cases among close contacts, and 0 cases among close contacts of close contacts. They also report testing 277968 people in hospitals (staff, patients, etc.), and thus far all have tested negative. CNN reports that "testing will now be rolled out citywide for the entire population of nine million".

The 3 cases identified in yesterday's news are described in detail. To give you an idea of how much detail is included: two of the sick are a 57-year-old man with the surname Shao and his wife a 53-year-old woman with the surname Jiang. They live together in this apartment complex. Jiang is a taxi driver with the license plate 鲁U•T4923, while Shao is a caregiver in a hospital. Jiang went to emergency in a city-center hospital 2 days ago for a slight "brain stem" (脑梗) symptom, and was tested positive as part of routine testing; it's likely his wife was tested immediately afterwards. These were both confirmed positive yesterday.

I feel this indicates the level of testing and contact tracing currently going on in China.

It depends what you mean by "eliminated". It clearly has had (a lot) less than some countries following the massive lockdowns, but clearly it hasn't completely eliminated it... because more lockdowns followed, albeit on smaller scales.

Chinese authorities are starting to lock down parts of a province neighboring Beijing after a spike in coronavirus cases.

The restrictions implemented in Hebei this week are some of the strictest since the spread of Covid-19 stalled within the country in March, and come as new waves of the coronavirus hit the U.S. and Europe.

Shijiazhuang, the capital of Hebei province and located about a three-and-a-half hour drive southwest of Beijing, reported 50 new confirmed coronavirus cases and 67 asymptomatic ones for Wednesday. It brought the provincial total to 90 current confirmed cases and 144 asymptomatic cases.

The city has stopped passengers from going to its train station, suspended long-distance buses, closed schools and put tighter control on entering apartment compounds, while authorities have blocked major highways in the province, according to state media. [...]

The new cases come a few weeks after Beijing reported a handful of cases in close succession, prompting mass testing in certain districts of the nation’s capital city.

On the other hand if by "eliminated" you mean they had a streach of low or undetectable tranmission over the summer, I don't see why that is hard to believe, just look at any graph from Europe over the summer, even better, also look at Australia over the same time period. 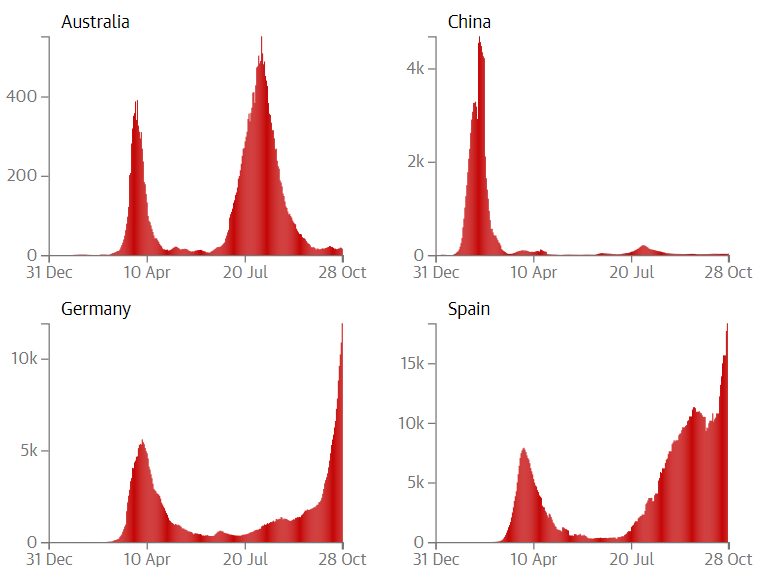 I am living in one of the major cities in China right now. And I think I'd better stay here for some time. People are still very alerted to the COVID-19 virus. And the television broadcast news about COVID-19 infection several times a day. Recently, there are some local infection reported in some northern cities. So I don't think this virus has been eliminated within the border.

Based on my personal experience, life is almost back to normal, except that I need to wear mask in public. Though the Chinese New Year is coming, the government encourage people to avoid travelling. And as far as I know, most people agree with that.

Honestly speaking, this is a very disciplined nation in face of a crisis like this. COVID-19 has killed many people in the world but it's having a hard time here.

Not the answer you're looking for? Browse other questions tagged covid-19 china .

19
In February 2020, did Tencent release accurate statistics for the Wuhan coronavirus that were 10 times the official figures?
9
Did China import 2 billion masks earlier this year to control Covid-19?
5
In response to COVID-19, as of 20 April 2020, has China provided the US with over 2.46 billion masks?
8
Did the Bundesnachrichtendienst (BND) accuse China of pressuring the WHO to suppress news about the Wuhan outbreak?
5
Did SARS-CoV-2 appear in some (Mojiang) Chinese miners in 2012?
26
Is Huang Yanling (a Wuhan virology researcher) the world's first COVID-19 patient?