NASA fire map shows the absolute failure of mainstream media for not expressing how devasting fires in southern Africa and South America are. 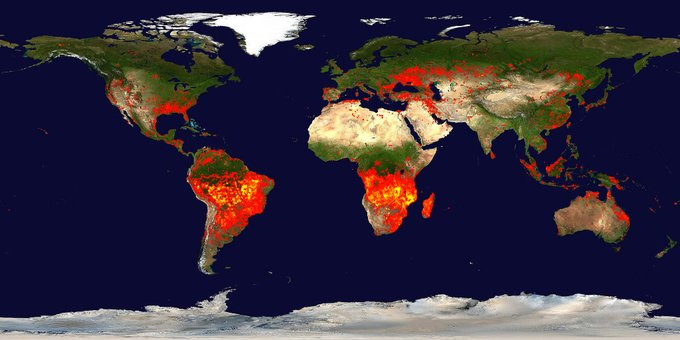 Certainly to the untrained eye it looks like there are massive issues with fires, much more of a problem than the current wildfires in California (as of September 2020).

This live map of fires from NASA appears to be the source.

I think while it's certainly plausible, there are possibly more pedestrian explanations, revolving around more impoverished people using lots of outdoor bonfires around 50-100m2 (for warmth, garbage disposal etc.), so many of these fires are "controlled" and not ripping through the countryside destroying homes.

Another explanation might be heavy use of "slash and burn" agriculture, or deliberate land clearance using fire for development or livestock.

Is it really a case of a huge difference between the severity of large fires in Sub Saharan Africa/South America and the rest of the world, or is the map being misinterpreted?

Let me try and answer the literal question in the headline and then address some other questions that are implied.

Yes, that seems likely. A 2019 paper suggests that sub-Saharan Africa alone accounts for about 70% of global burnt areas:

The area [Sub-Saharan Africa] was selected as existing BA [burned area] products account it to include around 70% of global BA.

Different parts of the world experience wildfires at different seasons. A CarbonBrief article explains that August to late November is peak fire season for, among other regions, southern Africa and the Amazon:

So yes, a large proportion of all global wildfires in September are expected to be in Africa and South America.

Is the NASA map potentially misleading in any way?

Yes. One of the key problems with this particular map is that the pixels which contain fires don't scale down as we zoom out the map. On the lowest zoom level, an unsuspecting viewer could look at the graphic and reasonably believe that there is one continuous mega-fire ravaging southern Africa all the way from the east to the west coast.

Generally, this style of map will exaggerate areas with many small individual fires in comparison to places with fewer but larger burning areas.

Why might news reports not focus on the fires in Africa or South America?

According to a fire research analyst at Global Forest Watch cited in the CarbonBrief article above, a significant portion of fires in Africa are used in agricultural practices there, which is not the case in eg California:

“Most of the fires that are started in Africa are for land-clearing and agriculture. A lot of it is either clearing for pastureland in sub-Saharan Africa or for agriculture in central Africa. I think that’s why we don’t see a lot of fires in Africa in the news because it’s more just part of the way of life there.”

A Washington Post article confirms that such practices are somewhat normal in the African savannah but perhaps less sustainable in the Amazon:

But fires in South America are different. In Africa, fires are used to clear grasslands and savanna. The ecosystem there has developed to embrace and depend on fires. Many of the fires on the South American continent are on the edge of the Amazon rainforest and are burning virgin forest.

In addition to the sustainability aspect, the affected regions in Africa are fairly sparsely populated. For example, California has four times the population density of Angola (97 and 23 people per sqkm, respectively) and more than twice that of the Democratic Republic of the Congo (37).

Taking all these factors together we can see why fires in California, the Amazon rainforest or the African savannah can attract vastly different levels of media attention or concern from experts.

8
Is there more forest in the Northern Hemisphere now than 100 years ago?
6
Are the 2019 Amazon rainforest fires only 7% higher than the 10 year average?