Are the following Twitter quotes from Vox leader true?

Recently Vox leader, Santiago Abascal, tweeted that the Spanish government was the worst government in the last 80 years, stating the following facts: 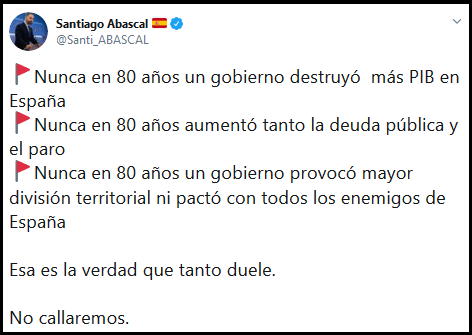 That is the truth that it hurts so much.

We will not be silent.

To be fair, GDP, public debt on unemployement should be measured on percentage, not on absolute values, about last fact, it's a bit subjective, but things that contributed to these territorial division and deals can be put for comparison.

As enemies of Spain we can consider the following ones from El pais newspaper where it's stated that what would be the enemies of Spain would be politicians from countries who want to separte from Spain who have the intention of declaring independecy for their places breaking the law that considers Spain as whole nation (this would be the best translation of "golpistas separatistas"), communists and the own PSOE.

For those 80 years we can consider also what in the time were considered those "golpistas separatistas", communists, and the own PSOE (which indeed was created before those 80 years).

Are these facts true?

(Partial answer: I'm leaving the third claim out for now. That one leaves the most to interpretation so I'm not sure this part is even answerable)

Before we get started: 1) there are lots of images 2) Getting data from 1940 is hard and I couldn't get what I wanted for all the different claims. As such, I had to limit the period chosen to more recent years for some of those 3) In a way a follow-up: but 1940 was very different from what we have today, which asks why the timescale used (of 80 years) is so big.

The Franco era started in 1936 and ended in 1975 with his death. Spain became democratic with the constitution of 1978 and since then its legislative power resides with the Parliament, while the executive power is attributed to the prime minister. The current prime minister is Pedro Sánchez since 2 June 2018, who is a member of the PSOE, which currently has a majority. This is what Santiago Abascal is referring to when mentioning the current government.

Because the tweet is unclear on this, there are several ways to consider it.

This is the evolution of GDP in absolute value for Spain (in million of current US dollars): 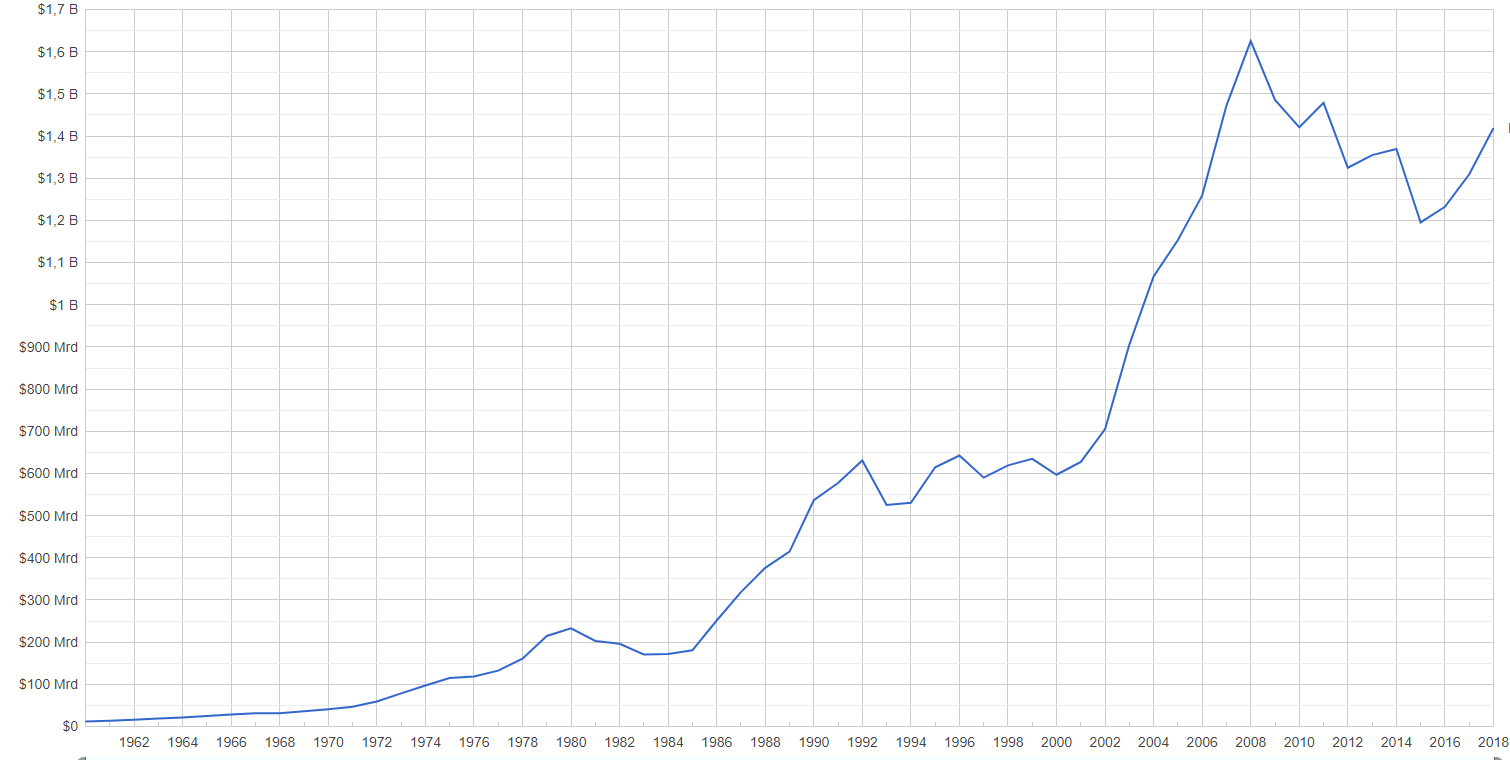 And this is the evolution of the growth (in %) of the GDP: 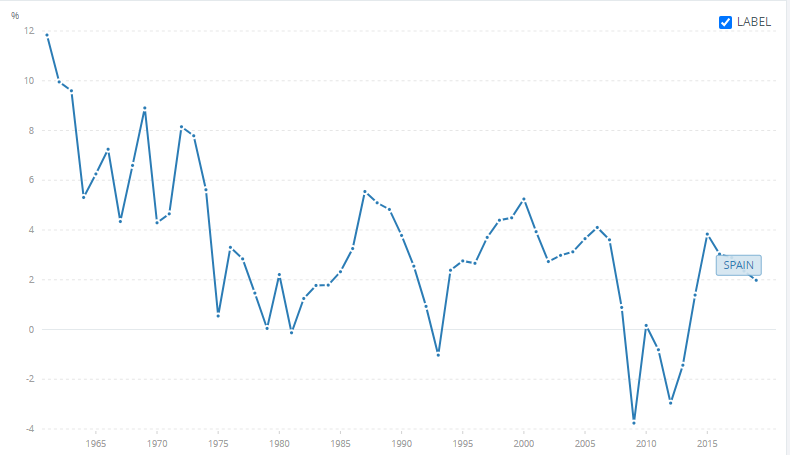 It is also possible to consider the evolution of the GDP per capita, which has an increasing trend, even if it can be argued that Spain does it slightly worse than some of other countries in Western Europe as seen here: 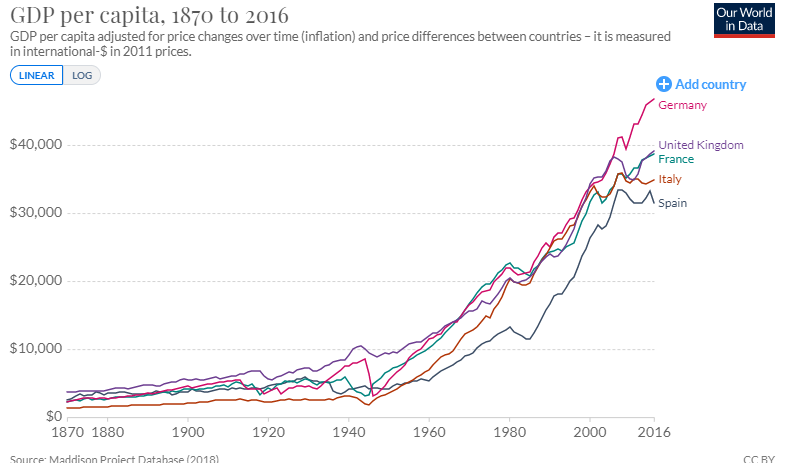 For short: in terms of absolute value (globally or per capita), this would clearly be false, but this can be true if picking the percentage based growth or relative GDP compared to some other countries (more comparisons on the website if you are interested).

Considering debt as a percentage of the GDP, it has varied quite a bit, as per Business Insider: 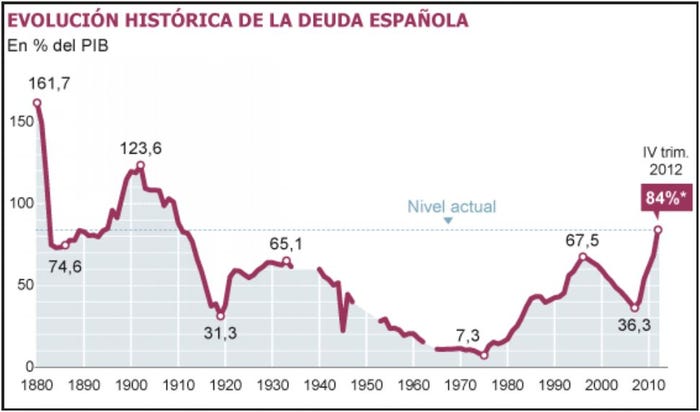 Santiago Abascal is himself sharing a similar image, with added context, showing that several crises result in increases to the GDP, along with some predictions from financial institutions (dating from early 2020, so before the COVID-19 crisis): 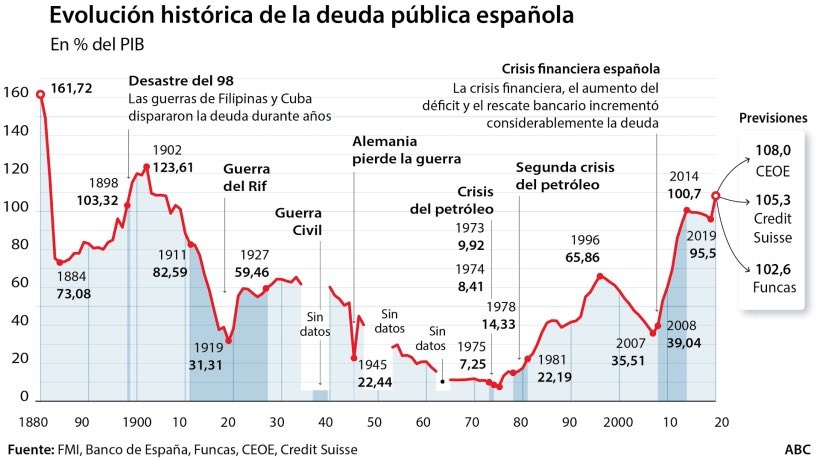 Hence the statement that the government "is destroying the GDP more than has ever been done in the past 80 years". While that is the lowest of the Euro area, the COVID-19 is also an unprecedented economic crisis, driving the overall GDP of the Euro area down by 12.1%: 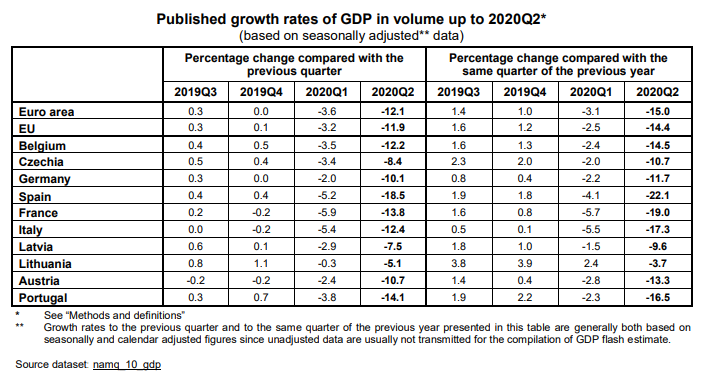 In absolute value, it has kept increasing: 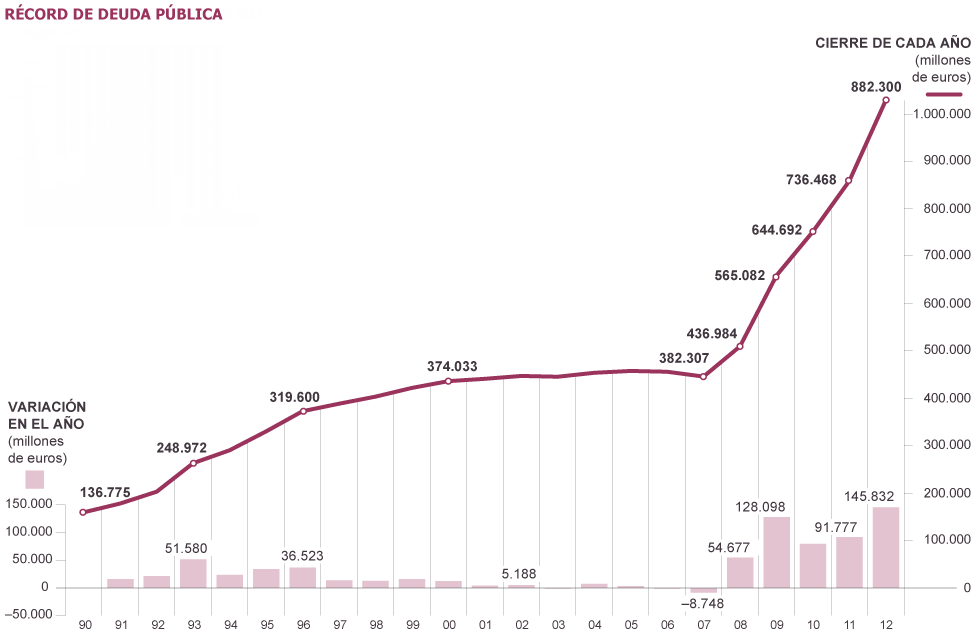 Which means that both in relative and absolute terms, this part of the claim appears to be true, but it has to be put into perspective with the current economical crisis due to COVID-19.

The oldest records for unemployment I could find are from 1955 and can be seen below (continuous line): 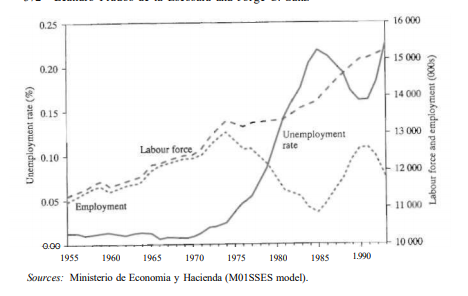 It is true that Spain also appears to be the #1 country in the European Union in unemployment rate as of June 2020, sitting at 15.6%, however it did reach much worse rates, sitting at about 26% in 2013, so the time period considered is important. A more recent extract to complete the missing years between 1993 and today:

Compared to 1955 which is the earliest reference I could find, this appears to be true, however Spain did get higher unemployment rates at times (e.g: 2013).

Not the answer you're looking for? Browse other questions tagged history politics spain .

13
Did Alexander the Great say the following quotation?
13
Is the novel "Sleepers" a true account?
12
Are state officials in Florida prevented from saying the term "climate change"?
14
Did Obama remove a Winston Churchill bust from the oval office?
3
Are Twitter censoring positive responses to President Trump's tweets?
73
Are the claims made by Indian Ministers / personalities regarding ancient Indian inventions true?