I always thought pilots were paid well. I am currently watching the movie "Capitalism, A love Story," and Michael Moore interviews some pilots, in which the pilots say they make around $19,000 - $25,000 per year as their starting salary flying commercial airline passenger flights. Some say they even worked second jobs.

Do they make such little money? Are there any concrete data for this?

The pay of pilots covers a huge spectrum. Experienced pilots for major airlines are well paid. However the pilots of regional airlines and commuter lines are sometimes paid much much less. This is partly because there is a glut of pilots right now, and also because pilots use these jobs as a way to gain the experience they need to be hired by the major airlines.

This site (thanks erekalper) gives ranges of salaries. Note that some of them (hello United) go down to $21,000! Delta goes down to $35,000 and SkyWest to $45,000, neither a lot of money for someone who has had to undergo years of training and qualification and who literally has your life in their hands. The difference from airline to airline is also huge.

This Wall Street Journal article (thanks fred) points out that the starting salary for US Airways is $21,000. Since they haven't been hiring for years there are no pilots on 'starting salary', but that's what they would get. The pilots of the Colgan Air plane that crashed into Buffalo were on about $24,000.

So in short:Yes, it is perfectly possible that the guy piloting your plane could be earning a poverty wage. Make of that what you will.

Non-airline commercial piloting jobs are paid even less, because they are the stepping stone to the junior airline positions (there is, incidentally, a licensing difference between an 'airline pilot' and a 'commercial pilot' - any reference to 'airline pilots' should exclude the guy flying a Piper Cub, even for money).

(Technically some of the salaries in the first survey could be for a flight engineer, but flight engineers are a vanishing breed in these days of two-person cockpits.)

EDIT: jwenting says that the low figures for United may be because pilots working their regional subsidiaries list "United" as their employer. Looking for confirmation of that. And of course it still means there are low-paid pilots out there.

Update: @DJClayworth pointed out that the primary question is whether any pilots make between $19k - $25k per year. I more took the question to be whether pilots, in general, are being paid these amounts. I dug a bit more and tracked down a survey by FltOps, an aviation professional assistance company, whose reports on lowest and highest reported salaries for various pilots is found HERE: 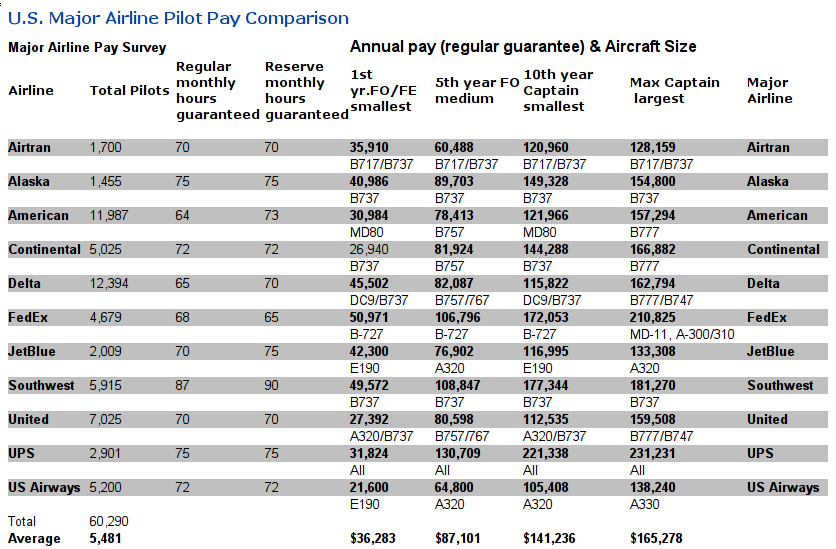 US Airways is definitely in this range with their lowest reported figure of $21,600. United airlines is also close at $27,392, with American Airlines coming in at 3rd with $30,984.

Based on this survey, YES, some pilots are being paid in the range that Moore reports.

Here is data from the US Bureau of Labor Statistics for "Aircraft pilots and flight engineers" (SOURCE):

Translating into yearly rates, we have:

We would need more statistics to figure out the distribution of pilot earnings, but the data above supports that pilots tend to earn quite a bit more than the values reported by Moore.

I also just found about the coolest site ever while digging around for this. Laborista (LINK) allows you to select any country and view available data for it's wage rates by occupation! They list their sources and methodology for each country HERE.

Here was my method:

So, here are the pilot wages for numerous countries (click to enlarge): 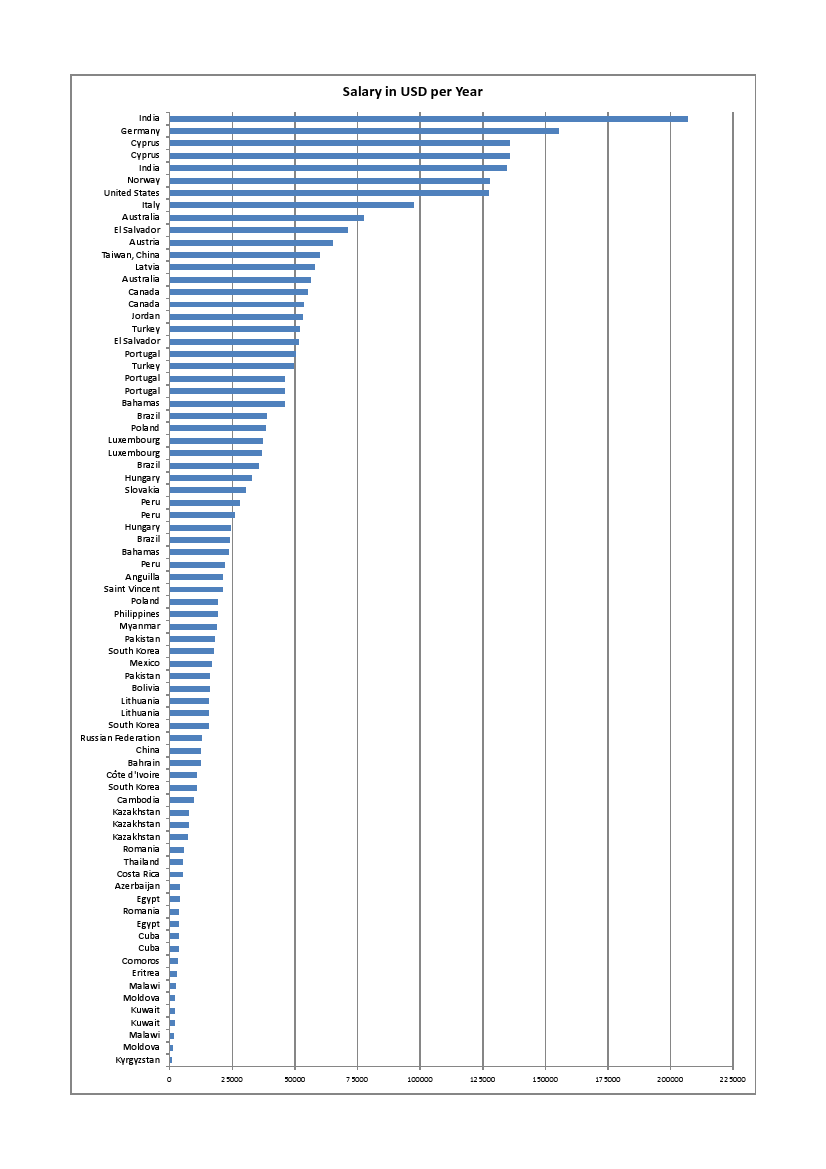 Based on the data... YES, there are pilots' in the US and world wide being paid values that track with what Moore reported; if the conversions and data collection techniques are accurate for the non-US countries, many make much less, in fact. (Though, we have no idea what the standard of living, economies, etc. are like in those countries, either.)

I don't think the question is particularly well phrased. Data supports some pilots making lower-than-expected amounts. We don't necessarily know their circumstances, size of the operations they work for, etc. Perhaps were Moore to interview only the top 10% of airline pilots we would be answering a question on this site about whether they really make $200,000 per year, as it seems so high.

Statistical analyses should sample randomly to create an accurate distribution; Moore probably does not have this aim, despite whatever good objectives he was trying to fulfill with his documentary. Just some things to consider about the type of source.

I found a few good sites that do seem to confirm this, but on the whole captains, officers, and engineers seem to be very well compensated for the major airlines.

From PayScale.com, there's a decent chart displaying the average range of salaries of all positions of some major airlines, which shows that United might have a fairly low salary for certain positions. That said, the average seems to fall around $100,000, and some easily go above $200,000 (most likely for captains).

This is confirmed by this interactive chart, which is just pretty darn cool in its own right. If one chooses to look at United, it looks like their first officers in their first year don't make a whole lot, but that number quickly rises over the years to the average mentioned above. And captains, as I speculated, seem to be able to make just about $200,000 per year with enough experience.

So this is probably true in specific cases, and Moore was exemplifying that to make some point, I'm sure, but is widely false.

I still think the question is too broad, but...

According to a Wall Street Journal report from 2009, a first year pilot at USAirways would earn a minimum of $21,600. Many factors can affect this, but that is the contractual minimum.

Also, USAirways is a fairly major carrier. There are regional airlines that go between a major hub city to smaller towns. These pilots would most likely earn less, since the company is smaller.

Patrick Smith, the author of Salon's "Ask the Pilot" column, has done several exhaustively detailed pieces on pilot wages and working hours. Here are some examples:

Not the answer you're looking for? Browse other questions tagged economics aviation .

25
Can we end poverty for $US175 billion per year?
22
Do airline pilots decide on flight plan and receive personal bonus for fuel saving?
9
Do teachers make more per hour on a career basis than doctors?
65
Do airlines in North America make around $10 profit per customer?
2
Has 2017 been the safest year in commercial aviation?
6
Did the Wright brothers fly 105 times in 1904?