Has BLM raised over 1 billion dollars but not yet performed any neighborhood cleanup, school funding, food aid or housing services? 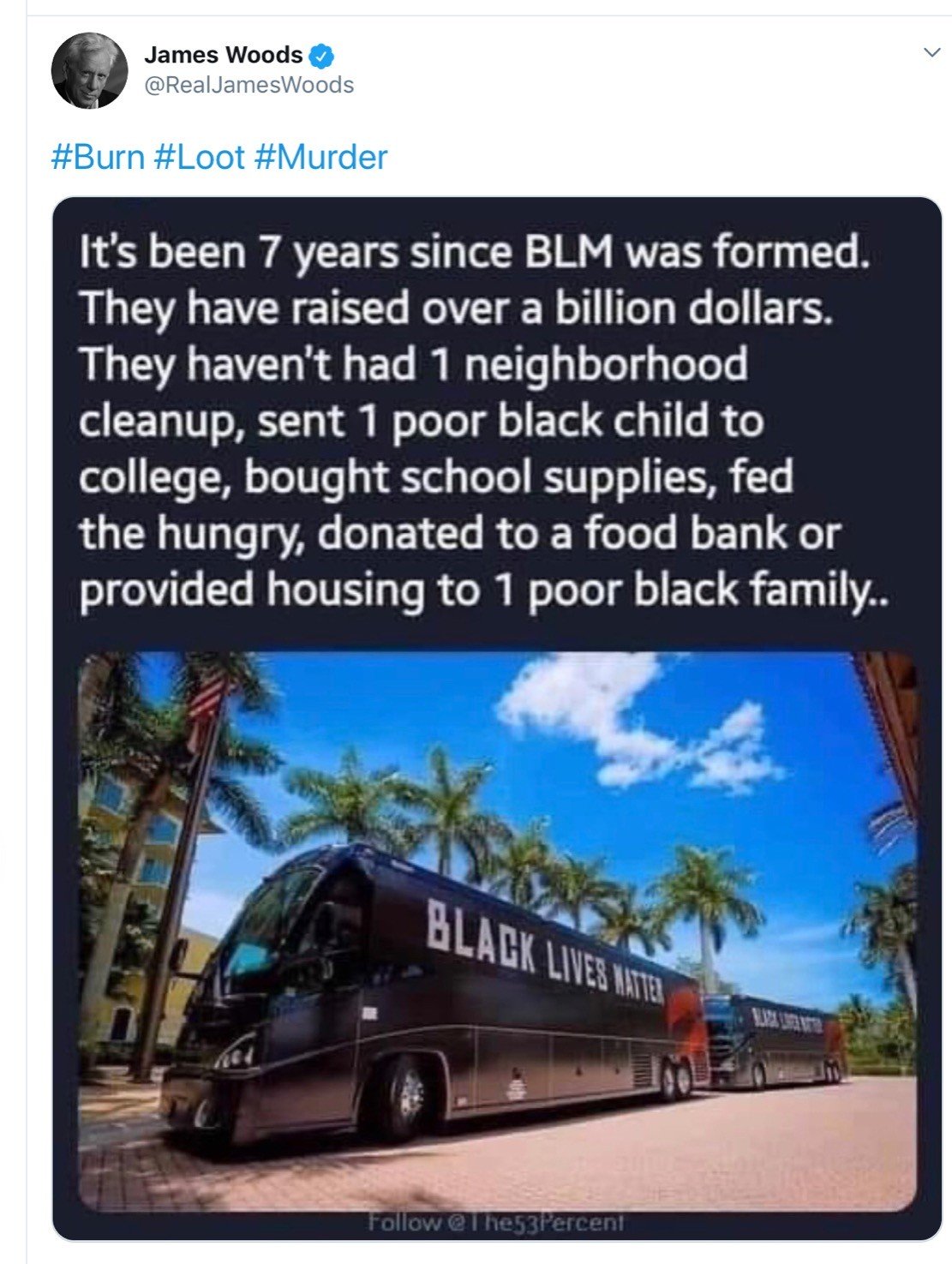 This Twitter post by James Woods claims that the Black Lives Matter movement has raised over 1 billion dollars but has not yet performed any neighborhood cleanup, college funding, student economic support, food aid, or housing services. Are these claims accurate?

The other answers have explained that doing the things mentionned in the tweet is not the goal of BLM, that is not easy to estimate accurately how much money they have raised, or that the buses in the picture were not paid with donated money.

But it might be worth adding that the claim that BLM "has not yet performed any neighborhood cleanup, college funding, student economic support, food aid, or housing services" is not even true.

The specific purposes of different BLM organisations differ, but they are typically not a charity aimed at providing scholarships, providing food, or providing housing. The movement is about protesting police brutality and overpolicing aimed at Black communities, but specific chapters may have different ways of going about this. Money collected as part of the BLM movement has gone to things like bail funds, political campaigns, the ACLU. and Black-led charities such as Color of Change. Each of those organisations have done different things with their money. For this reason, it's impossible to say how much money they have raised in total.

That specific photo and those buses are not affiliated with any BLM organisation. They belong to the Toronto Raptors NBA team who repainted their buses in support of BLM in July. Here is the source of the image, which has circulated widely with various different captions falsely implying that they were purchased with BLM funds.

It's been 7 years since BLM was formed.

This statement is generally true.

They have raised over a billion dollars.

This statement is ill-formed. As many have noted, "BLM" is not the name of an unambiguous revenue-raising organization. Rather, it is the name of a social movement plus numerous legal organizations, some of which are registered charities. So the antecedent for "they" is not something for which "raising a billion dollars" is a well-defined statement.

For instance, it appears that the movement did not receive significant donations until 2015, at least, which contradicts the implication that BLM had "7 years of funding" with which to perform social services. Illustrating the complexity of what it means to "donate to BLM", consider this description of an early donation from Democracy Alliance:

It’s donated more than $200,000 to the Black Lives Matter movement since Brown’s killing. According to its entry on a philanthropy website, more than $61,000 went directly to organizers and organizations on the ground in Ferguson and Baltimore, where the death of Freddie Gray in police custody in April sparked a more recent wave of Black Lives-related protests. An additional $115,000 went to groups that have sprung up to support the movement.

The Ford Foundation reportedly donated $100 million to...BLM? Well, it's not quite that simple. The donation went to M4BL, which includes the Black Lives Matter Network as a member, among many other groups. So, either this money went to "BLM" + others, and thus you can't really count it as $100 million for "BLM", or we can count M4BL as falling under the "BLM" umbrella. But if we do that, where do we draw the line? Does every black advocacy group therefore qualify as part of the BLM movement?

Maybe it seems easy to include M4BL under the BLM umbrella. No problem. But where does Woods get the "$1 billion" figure from? We don't know, because he doesn't cite a source. We do know that a lot of money has flowed towards black causes recently, so let's take a look at another source. NBC collected this summary list, from which I will include just a few excerpts for illustrative purposes:

The home-sharing site tweeted on June 1 that it will be giving a total of $500,000 to the NAACP and Black Lives Matter.

The retail and technology giant announced on June 3 that it plans to donate a total of $10 million to 11 organizations, including the ACLU, Equal Justice Initiative, and the NAACP.

The beauty brand released a statement on Instagram saying the company planned to donate $500,000 to “organizations focused on combating racial injustice.”

As you can see, the NAACP figures prominently, and corporations are giving to numerous and diverse organizations. Does the NAACP count as "BLM"? If so, Woods can back up his start date by more than a century. If not, it's hard to say that all this money is going to "BLM" (whether that means the movement, any one of numerous organizations featuring the name, or the constellation of social justice organizations loosely affiliated with the movement).

What are BLM's goals?

In the previous section, we did not establish who or what constitutes "BLM as a donation recipient", instead offering a large variety of possible answers. This points to the extreme difficulty in discovering the goals of donation recipients, something directly implied and defined by Woods' tweet.

Perhaps the closest BLM proxy we can hope for is the Black Lives Matter Global Network Foundation. So let's see how its goals align with the goals of the putative BLM imagined by Woods. Let's start with the mission statement on the BLM website.

Four years ago, what is now known as the Black Lives Matter Global Network began to organize. It started out as a chapter-based, member-led organization whose mission was to build local power and to intervene when violence was inflicted on Black communities by the state and vigilantes.

Now, I don't see any direct or implied mission to clean up neighborhoods, buy school supplies, send children to college, feed hungry people, or provide housing. The statement is clearly about violence against the black community. Therefore, Mr. Woods' tweet is clearly a straw man argument in which he sets up his own personal vision of what BLM means, and then knocks it down with an unrelated picture for good measure.

So, while the claim may be literally true, it is analogous to saying:

James Woods has received millions of dollars in income over the last several decades, but hasn't saved a single baby from a burning building.

The implication, of course, is that James Woods is a terrible human being that doesn't care about babies, or burning babies, but that he has the means to do so, increasing the monstrosity of his indifference. The statement above, so far as I know, is literally true, but rhetorically invalid, to the extent that James Woods' acting in no way implies some obligation to go save babies from burning buildings.

Are these claims accurate?

is, IMO, the wrong question. A better question would be:

Is the implication that BLM has grossly misspent its donations accurate?

That's a much bigger question that requires a much longer answer which is out of scope here.

Johanna's answer has already told a lot about the fact that "BLM" can refer to many things (including organizations that do contribute to the causes mentioned in the question, and also ones that do not).

I do want to address one major fallacy in the tweet, which has been the subject of a lot of comments on the question and on Johanna's answer and in the world in general. Johanna brushed on this briefly in her last paragraph, but I would like to go into more detail. The picture in the tweet shows a picture of buses for the Toronto Raptors NBA (basketball) team, which is extremely misleading because it has nothing to do with the "billion dollars" mentioned in the tweet. The Toronto Raptors are worth about $2.1 billion and none of it came from BLM donations or anything of that sort; it came from selling seats at basketball games, selling merchandise, and similar channels. Furthermore, NBA players do spend a lot of their money on direct philanthropy, especially those mentioned in the tweet (school, food, housing, Black neighborhoods). One of the many examples, is the school built by LeBron James.

The picture tries to misrepresent buses owned by the Toronto Raptors basketball team, as being bought by leaders of the BLM movement from the "billion dollars" they have received in donations and that is just absolutely false; but for anyone that didn't just happen to be such a big fan of the Raptors that they've seen those buses when watching Raptors games, they may actually think those buses have something to do with BLM as the tweet suggests (this has already happened to a few people that wrote comments here).

Finally, the tweet, which is from 29 August 2020, is actually just a re-tweet of something that has been around since more than a month earlier (at least) and Facebook already marked it as "misinformation" which you will see if you click on the link earlier in this sentence. So the tweet shown in the question, is not actually the original source.

BLM is not one organization

This has been covered by other answers, but just so this answer is complete on its own: There is not one single organization that is BLM. Instead, BLM is a social movement, ander there are lots of groups in it, some of them having "BLM" in their name. Additionally, though I haven't heard of an instance of this yet, it is entirely possible for a group or organization carrying "BLM" or variations thereof in their name without being part of the social movement at all. This happened with other social movement names, e.g. a lawyer in Germany not associated with the movement founded Fridays for Future e.V. and tried to sue fridays for future for their domain name fridaysforfuture.de (German article only, sorry). Something similar happened with a group of actors pretending to be a group associated with the Black Panthers.

tl;dr: all claims of the form "BLM did x", under the premise that BLM is one organization or actor instead of a diverse movement, can only be factually false.

BLM groups have done those things

Quoting from the comments:

With respect to "fed the hungry" and "donated to a food bank", it seems that at least the Chicago BLM chapter has organized some things in that area blacklivesmatterchicago.com/foodbox; Philadelphia also has some similar activity blmphilly.com/donate/fundraising-campaigns/mutual-aid

BTW, charitynavigator.org/ein/474143254. It states that BLM had at least 1 program dedicated to providing for the poor.

Additionally, there were many reports of spontaneous mutual aid and direct action in the context of BLM protests, e.g. during the Capitol Hill Organized Protest (CHOP)

Regarding the willfully misleading picture I quote from an other answer:

The picture tries to misrepresent buses owned by the Toronto Raptors basketball team, as being bought by leaders of the BLM movement from the "billion dollars" they have received in donations, and that is just absolutely false

I also want to add that the used hashtags ("burn", loot" and "murder") clearly aim to discredit BLM, without providing any factual information.

There is also no source for the amount of donations, and while others have already explained the difficulties in estimating how much money the BLM movement in its entirety has actually collected since its beginning, I want to emphasize that this number seems completely made up, and not the result of methodological errors.

Not the answer you're looking for? Browse other questions tagged united-states politics social-media black-lives-matter .

3
Are there "80 million unsolicited ballots" being sent in the USA?