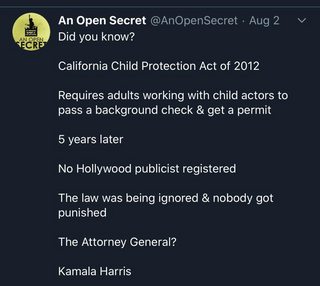 The law was being ignored & nobody got punished

While Attorney General Of California

Why didn’t she enforce the 2012 Child Protection Act

To protect child actors from pedophiles

There's a couple things about this claim that seem to be either lacking or completely wrong.

First is the law it references. Which one? There's one for the Federal level and one for California, both in 2011-2012. There may be more, but these are the only 2 that could be relevant.

Since this is specifically stating California, I'll break the law for the state down, with help.

Who needs a permit:

Who doesn't need a permit:

Both sections come from bizparentz.org, a site dedicated to help performing children and their families.

So, it looks like there's very specific reasons for not getting a permit, including when a parent is present and "within sight or sound of the minor". This would mean that any time the parent is on set with the child, a permit may not be necessary. I'd assume the highly paid lawyers of the big studios would have a better grasp of this law than me, and if they haven't required the studios to get a permit, that's a big clue to me that it isn't necessary for everything.

Doing a search from Jan 2012 to Dec 2017 at the above DB shows that there aren't any registrations during that time frame. However, the earliest entry into the DB is 7/3/2019, so it seems that even 2 years after she became a Senator, there wasn't anyone registered. However, this seems to related to the fact that this database was only created in May of 2019.

Effective May 20, 2019, a new online system was implemented. You must create a new online account. Any existing username and password will not work.

As I'm not familiar with this system, and the likelihood that the old database isn't available to the public, there's very little chance we can see who was registered prior to this new system.

But there's still a few things we can learn from this database.

Granted, this isn't a 100% guarantee, but it seems as if this means there really aren't that many people or businesses who are required to get this permit. With the amount of child actors and actresses in California and the litigious nature of Hollywood alone, I'd expect every major and minor studio to have everyone of their major actors, every director, every onsite prop and wardrobe associate, every hiring person, photographers, and maybe even caterers get this permit to cover their ass.

This isn't an expensive permit ($198), so the studio would likely cover it as a Cost of Doing Business to make sure they could get their movie made. Even if they spent $10k on these permits for extras and other new adult actors/actresses, that's a drop in the ocean for most Hollywood budgets.

More than 40 managers are listed in the state’s database of permit-holders, but Deadline has found an equal number who don’t have permits but manage the careers of child performers anyway.

The law doesn't state who is enforcing it, so it'd probably be up to the police. On reading the article from Deadline (as posted in the previous section), enforcement is up to the Department of Industrial Relations, not the Attorney General. Looking at their site, I can't find a hierarchy that would explain if they are under the Attorney Generals office or something else.

I do see that they are under the Labor & Workforce Development Agency, though.

What does this mean for Kamala Harris? She likely had nothing to do with enforcement of the law and would have likely only been peripherally aware of a case had it gone to court, at best. Of course, that goes out the window if it's a high profile case, but I couldn't find any cases (at all) in the little time I took to look.

Because of the wording, searching for any cases brings up articles about neglect, abuse, and other related terms, rather than anything pertaining to the 2012 Law. With the results being so muddied, it would take a massive amount of time to sort out the cases of parental abuse and try to find a relevant case. On the other hand, if there was a major case, it would likely be a major scandal and be all over the news and also all over the searches. So, with as little evidence I can find of a major case, which would likely happen if it involved a major film producer, I'm going to say that Kamala probably wasn't involved in any way with enforcement of this law. I'll even go further to say that neither was her replacement.

This has been slightly nagging on me since I wrote this Answer, so I'm going to try to rehash my thoughts again. The comment from fredsbend helped with my decision to do so.

So what I'm trying to say is that that the Attorney General or District Attorney likely wouldn't be out arresting people for committing a crime against this law. That would be up to the actual enforcement agency (whether it's the police or the Labor & Workforce Development Agency). The AG or DA might work to build a case against someone or a company, but they wouldn't be out there with handcuffs or zip-ties making the arrests.

In a high profile case, the AG or DA would likely be in the courtroom in a judicial manner, but prosecution is still not enforcement as most people would consider it.

After reading the Wikipedia entry on Law enforcement, it lists the courts as part of enforcement, so there's definitely an aspect of "enforcement" that can be laid at the feet of the AG and DA. At the same time, though, the meme implies that Kamala Harris should have been somehow directly involved with all cases relating to this law. Taken to an illogical extreme, that would also imply that Harris should also have been directly involved with enforcing all California laws, which is completely unrealistic.

In reality (rather than on TV, film, or books), an AG or DA needs to have a realistic reason to be involved in discovering who is breaking the law. They generally don't waste their time assuming that because a business hasn't registered in a database that they are breaking a law. If they hear about multiple, reasonable cases/reports about the same company or person they can start an investigation into that company or person, but they would still need to have a good and legal case made against that company or individual in order to have the people involved arrested and taken to court. This is expensive and time consuming, so it's likely not going to be done for every rumor or lack of permit.

Also, a judge would have to be involved to sign off on any warrants, arrests, and whatever else is needed to take evidence/property and people into custody. Again, this would likely be not public if the case and already gathered evidence weren't approved by the judge.

I could go further and make statements about judges being corrupt and not allow a case to be made, but that's making a lot of assumptions that aren't necessarily relevant or true. I'm simply bringing this up to state that even if Harris' office did investigate a case, they still may not have had the authority or permission to do something about it.

I'm going to say this claim is questionable, at minimum. The Tweet was posted August 2, 2020, so they are likely working with the same database as I just found, so they don't have the information pre-2019 of the new system, so they really don't know who was and wasn't registered.

Because of the few people who are registered on the site over a year after the new system has been implemented, I'd also say that there's few actual reasons for people to be registered. Or there's enough reasons to not be registered that people and businesses can easily/simply make sure that part of the law is complied with to not need the permit.

There's also not a direct line between this law & it's enforcement and the Attorney Generals office. With what I've found, there's little, if anything, that would involve Harris' office in a case, except for large amounts of political or media pressure. And with what I didn't find, there's little to no evidence that there's a high profile enough case for her office to have been involved.

I don't know everything and I didn't research everything. Also, I'm not a researcher of the media by profession, so I can't spend endless hours looking for evidence, so there may be information out there that contradicts my research. If you find it, please feel free to post your own answer. Arguing that I missed "obvious" data isn't productive.

Not the answer you're looking for? Browse other questions tagged united-states politics law law-enforcement movies .

6
Did Ronald Reagan's LPS Act increase homelessness in California?
15
Did the democrats win the popular vote in the 2012 US congressional elections?
1
Did any aspect of the Affordable Care Act take effect March 23, 2010?
2
Did 50% Americans believe “the movie and television industries are pretty much run by Jews” in 1964?
15
Am I owed a refund of “between $45 and $70” for buying milk in California in the last 14 years?
58
Did Wonder Woman's Gal Gadot earn ~1/40th of Man of Steel's Henry Cavill?
31
Did 64,000 married Indian men take their own lives in 2012 after charges of domestic abuse?
7
Did a non-US Hungarian citizen get extradited to the United States for not reporting an American customer of his bank?
7
Did Trump use the Defense Production Act in recent weeks?
22
Did Senator Hillary Clinton introduce only a single bill (an anti-flag burning bill) into the Senate?