Scott Adams recently made the claim that the majority of doctors in the USA support the use of hydroxychloroquine. Normally a cartoonist's podcast would not be a notable source for a claim, so it is worth reviewing the background.

There is clearly a great deal of controversy over the use of hydroxychloroquine (HCQ) for treating COVID-19. And mainstream media seem to side with the view that its effectiveness has not be demonstrated and therefore promoting it is unsafe. Hence they tend to push back when Trump or his supporters promote it. Some claim this is a political conspiracy designed purely to hurt Trump.

In a recent CNN interview with Peter Navarro (Trump's trade advisor) this scenario played out in a fairly typical way (reported by The Hill here):

“Tony is a great guy. There's just disagreements on things like, for example, hydroxychloroquine. He has a strong point of view. There's as many doctors on the other side,” Navarro said on CNN’s “OutFront,” referring to Fauci.

“But there aren’t,” Burnett responded.

“Peter, first of all, on a basic level, you're an economist, not a scientist,” she added.

Navarro responded by referencing a video posted by Scott Adams, the cartoonist behind Dilbert, that attacks CNN over its coverage of the anti-malaria drug as a coronavirus treatment.

“He did a beautiful video on Twitter, and the thesis of the video is that CNN might be killing thousands because of the way they’ve treated that. I’ll let Scott Adams be my defense on this,” Navarro said.

Since the video has been referenced in a major news outlet by a very senior government official as a key plank in his support for the use of HCQ, it is worth questioning the key claim in the video.

The audio of the Scott Adams podcast is here.

Scott Adams' argument in the podcast claims the mainstream media are conspiring to suppress evidence to hurt Trump. His argument is that many if not most doctors agree with Trump's position.

He claims around 1:30 in the podcast that many doctors worldwide support its use (all quotes my manual transcription):

I would guess that maybe fifty thousand doctors around the world are using it on themselves or prescribing it.

He builds on this argument the idea that Trump's views on HCQ are entirely consistent with the views of the majority of doctors:

It is completely true that Trump's opinion on HCQ matches exactly most doctors' in the USA.

More specifically at around 4:25 he claims that "perhaps 90%" either use it or support its use:

He clarifies by excluding academic medical experts (like epidemiologists) from his claim as he seems to think they are institutionally biased. So his claim appears to be about "front-line" doctors only.

His entire argument is founded on this claim. Including the idea that media suppression of evidence that HCQ works could be costing tens of thousands of lives.

I don't think Skeptics.SE is a good place to assess whether there is a conspiracy theory by the mainstream media to hurt Trump, but a simple factual claim like the foundation of Adams' analysis is a good fit here.

Do the majority of US doctors support the use of HCQ for treating covid-19?

The Navarro interview took place on August 5 and quoted the Adams podcast which was done on July 30. We should presume that their claims are intended to reflect the situation on those dates.

I would presume that, early in the pandemic, most doctors would support testing any drug where there might be a reasonable hypothesis of benefit. So results reporting medical opinion in answers need to take into account when the opinion was surveyed.

The only way to settle this is to find and cite a study or survey that supports or refutes the claim that "the majority of doctors in the USA support the use of hydroxychloroquine against COVID 19."

I found an article "USA Today" from 18 June, 2020 which quotes a survey that (among other things) asked doctors around the world which treatment they thought was most effective against COVID 19.

USA Today says that 51 percent of US doctors chose "nothing" (meaning "no treatment" rather than "didn't choose anything") out of the list of possible treatments in the survey question. That was the highest percentage for any of the treatments on the list. Hydroxychloroquine was on the list, and scored 37 percent for doctors all over the world - USA Today didn't give the hydroxychloroquine results for just the US.

This survey from Sermo seems to be the basis of the USA Today article. 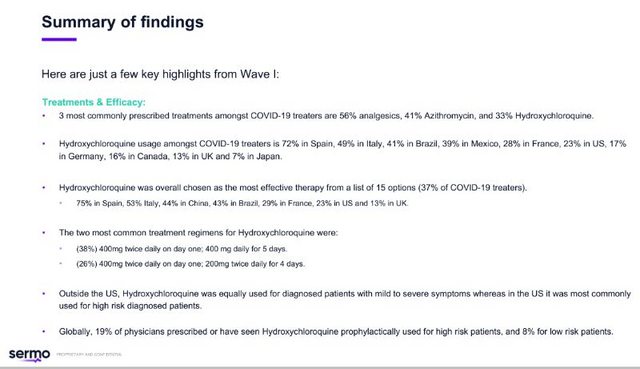 That's a far cry from "majority."

To finish it off, Sermo reports that the use of hydroxychloroquine is dropping. The rate of use was higher before 11 June, and was still dropping.

That pretty well disposes of "majority of US doctors recommend the use of hydroxychloroquine for COVID 19."

Given how quickly things change in respect to COVID 19, the situation might have changed since Sermo conducted the survey.

If anyone knows of a newer or better survey, I'm all ears.

This is precisely what an April survey of 1,271 US doctors showed:

Sixty-five percent of physicians across the United States said they would prescribe the anti-malaria drugs chloroquine or hydroxychloroquine to treat or prevent COVID-19 in a family member, according to a new survey released today by Jackson & Coker, one of the country's largest physician staffing firms.

Only 11 percent said they would not use the drug at all.

The use of HCQ dropped off later, due to the FDA withdrawing its emergency use authorization (Doctors can still prescribe it off-label in some states, as far as I know, but it's risky from their point of view, due to liability and other concerns). Less use due to the FDA ban doesn't imply that the doctors believe in its effectiveness less though.

In any case, the survey took place in early April, while Trump admitted using HCQ in mid-May. The (in)famous anti-HCQ Lancet study everyone and their dog heard about on the news was published days later. It was exposed as using fake data and withdrawn in June.

So, it's safe to say that Trump's use of HCQ was not considered heretical by doctors at the time he spoke.

Adams's argument is that the media's frenzied attack on Trump over this issue shows their bias.

Not the answer you're looking for? Browse other questions tagged medical-science covid-19 medications media .

47
Is COVID-19 more dangerous than typical annual coronavirus variants?
2
Is hydroxychloroquine proven to reduce the need for hospitalization for Covid-19?
13
Is hydroxychloroquine + zinc + antibiotics an effective treatment for COVID-19?
49
Was Donald Trump treated with pharmaceuticals derived from fetal stem cells?
26
Is Huang Yanling (a Wuhan virology researcher) the world's first COVID-19 patient?
3
Has Dr. Pierre Kory pioneered treatments that are now the standard of care for COVID-19 patients?
61
Is the COVID-19 vaccine 50 times more likely to kill young people than COVID-19 itself?
8
Did COVID-19 kill ~5 times more people per capita in Jun-Aug 2021 in US counties that >70% voted for Trump than in those which voted <26-32% Trump?