Can an RNA vaccine change your DNA permanently?

I was sent this recent Food For Thought YouTube video.

It contains a number of wild claims about vaccinations.

In particular, it contains snippets of edited, unsourced footage of Bill Gates saying:

one final way that's new and is promising is called the RNA vaccine. With RNA and DNA instead of putting that shape in, you put instructions in the code to make that shape.

Whether or not the Bill Gates was accurately quoted in context, can an RNA vaccine permanently change the recipients DNA?

Later in that video the claim is specified a bit more, mentioning that mRNA with CRISPR/Cas will modify our genetic code. You can edit DNA with CRISPR, but that is not what is in an mRNA vaccine. The mRNA in an mRNA vaccine alone cannot edit DNA. In the CRISPR gene editing method the actual act of cutting the DNA to edit it is performed by Cas9, which is an enzyme, not RNA.

The quote by Bill Gates doesn't have anything to do with modifying the human genome. It explains the basic mechanism of mRNA vaccines. In a classic vaccine you use an inactivated virus, or just one protein of the virus. In mRNA vaccines you use mRNA that encodes a virus protein, which is read by your cells and that protein is produced for a short time. The code for creating that protein is never incorporated into your DNA, mRNA is read directly by the cells and protein is produced from it.

It is currently unknown whether this occurs, though it is considered unlikely and unimportant. There is a plausible mechanism which could cause it, but as of February 2022, it seems no experiments have been done to prove or disprove whether this actually occurs.

The mechanism is LINE1-mediated retrotransposition, in which a retrotransposon (which make up 17% of our DNA) is translated into a reverse transcriptase protein and picks up the vaccine RNA to reverse-transcribe back into DNA and incorporate into the genome of the cell. (Normally these reverse-transcribe their own RNA, but they can occasionally integrate other RNA instead. This is known to have happened long ago with (non-retroviral) RNA viruses, for instance.)

Studies have tested whether this occurs with the coronavirus itself, and although one found that it did, it is not peer-reviewed in the usual way and is considered to be a false positive, an artifact of the test method. Follow-ups have found no evidence that coronavirus integrates into the genome. (However, the vaccine is not the virus, so this is a clue, not proof.)

Even if this does happen, it most likely will just result in the cell producing spike protein continuously, which will trigger the immune system to kill the affected cell.

While it is possible for retrotransposons to cause cancer, they already do this on their own, without needing a virus or vaccine at all, so you are already at risk of it just by being a mammal.

Then, even if the risk of genomic integration is widely considered as null and is not a biosafety concern, eukaryotic cells have been shown to be able to provide, to some extent, reverse transcription activity [25 –28]. Further research on that eukaryotic reverse transcription activity, in the context of RNA vaccination, might be of interest for the scientific community [14].

Do RNA vaccines obviate the need for genotoxicity studies? (November 2020)

The potential for exogenous RNA, viral or other, to integrate into human DNA from vaccination is at best theoretical at this time. The potential for any such RNA to fundamentally drive altered or oncogenic processes in human cells is also theoretical. Indeed, some may argue that the infections from RNA (DNA) viruses better present viral RNA (or DNA) into the cellular locations where integration or first-hit events occur more than any potential vaccine. Until any such hypothetical concerns are tested or observed from vaccination or natural infection, regulatory safety assessments of RNA vaccines should include genotoxicity studies.

mRNA vaccines: Why is the biology of retroposition ignored? (July 2021, preprint)

I conclude that is unfounded to a priori assume that mRNA-based therapeutics do not impact genomes, and that the route to genome integration of vaccine mRNAs via endogenous L1 retroelements is easily conceivable. This implies that we urgently need experimental studies that would rigorously test for the potential retroposition of vaccine mRNAs. At present, the insertional mutagenesis safety of mRNA-based vaccines should be considered unresolved.

This image of the process is from the above preprint: 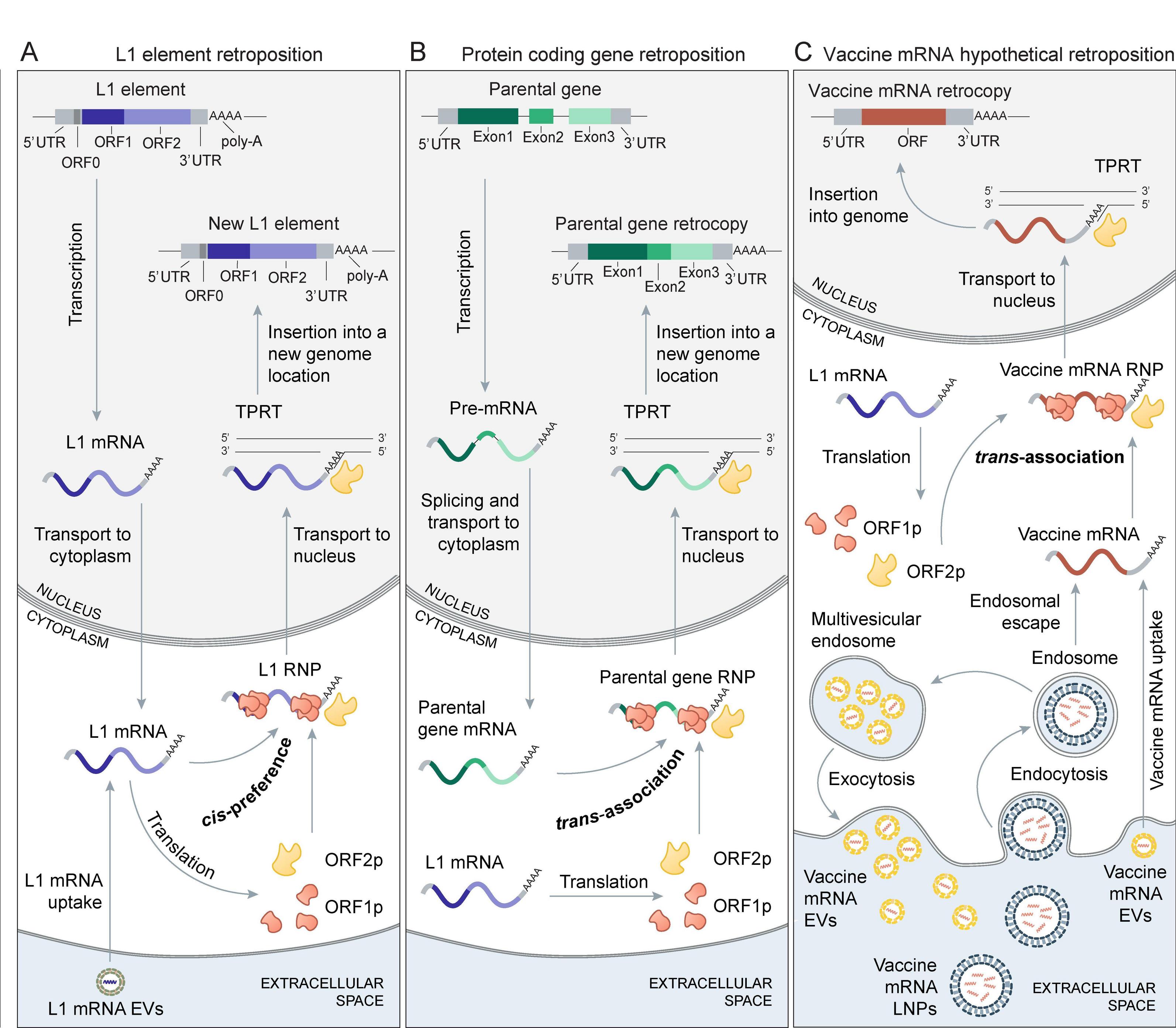 This is an open-ended question which invites speculative scenarios - most and hopefully all of which will have been carefully considered during vaccine development. In concept the vaccine could alter DNA in several very rare and unusual ways, such as if the recipient has HIV and the vaccine RNA became a substrate for the viral reverse transcriptase. More plausibly, the recipient might produce an RNA transcript (possibly produced by a transposable element of viral origin) which base-pairs with the vaccine RNA. This would set off cellular antiviral alarms that affect histone proteins, which tightly adhere to the DNA and can affect the activity of specific genes for a long period of time ( https://www.ncbi.nlm.nih.gov/pmc/articles/PMC5651755/ )

While that sounds very serious, we have to bear in mind not only the balance of probabilities, but also that DNA can be modified in ways that may be permanent for an individual and even transmitted to children and grandchildren - by a vast and mostly unknown set of common environmental circumstances such as famine, obesity, pollutants, and smoking. Look up search results for https://pubmed.ncbi.nlm.nih.gov/?term=transgenerational+methylation+human and make up your own mind.

Anything is possible in biology. If you can't grow a warp drive in your belly, it's only because of physics. Yet many things that could happen are so unlikely that they never do, and we often need to make pragmatic choices between the known risk of death and debilitation on one side, and completely unproven scenarios on the other.

Note: per the question, we're not discussing the original conspiracy video's CRISPR idea, which describes a gene therapy product rather than a vaccine. You could put rat poison in a vaccine, but we wouldn't talk of the safety of rat poison when considering the safety of "vaccines".

1
Is it possible for mrna vaccines to affect DNA?

20
Do "new documents" change anything about the Wakefield/MMR vaccine paper/retraction/fraud situation?
6
Can the BCG vaccine cure type 1 diabetes?
2
Was human DNA found in a sample of Priorix Tetra MMRV vaccine?