Are private contractors being used by Federal Agencies in the response to the ongoing George Floyd protests?

I've been referred to this medium article, which makes a series of claims about the roll of private contractors in providing crowd control services for Federal Agencies.

Specifically, I am interested in whether the Federal Protection Service is using Triple Canopy "Contract Officers" to control crowds at the protests in Portland, Oregon.

The author, Bill Conroy, seems to be a longtime investigator, journalist, and editor. He links quite a few articles and websites to back up his claims.

I've found some documentation that suggests FPS has recently been contracting Triple Canopy, and that FPS knew or should have known about potential conduct issues with Triple Canopy. Is there evidence one way or another, on whether Triple Canopy or other "Contract Officers" are present and active at the Portland Protests?

[Disclosure: This answer was written by the author of the Medium article, Bill Conroy.]

The contractor in Portland is revealed in this follow-up story:

Triple Canopy is the second leading FPS contractor nationwide by dollar value, per USASpending.gov, but it is a different contractor in Portland. The story digs into that fact.

The contractor is Annapolis, Maryland-based MaxSent — which also does business as CDA Inc., according to a court transcript of a video deposition of Gabriel Russell, a Federal Protective Service (FPS) regional director. The company is licensed to do business in 44 states and also has FPS contracts to provide security personnel to federal properties in at least six states, including Oregon.

The contractor in Portland is revealed in a federal court filing, available through Pacer.

I have provided a screenshot of a snippet of the transcript in a tweet, reproduced below: 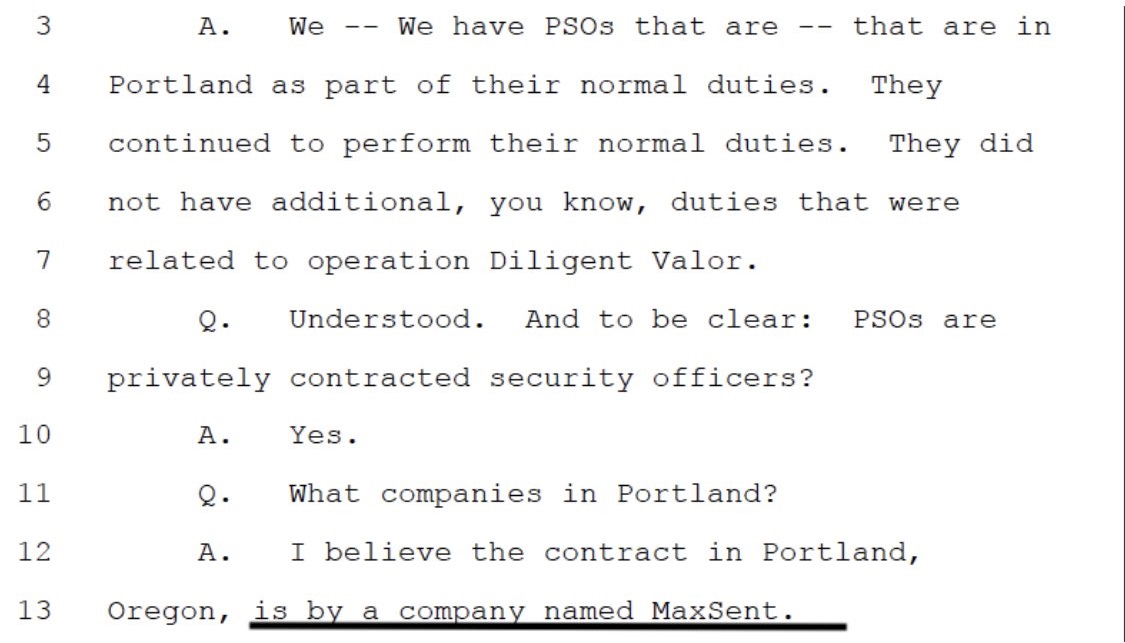 Triple Canopy has contracts in other states with FPS. I am in the midst of the arduous process of lining up which contractors have contracts with FPS in which states currently, via data from public records.

Not the answer you're looking for? Browse other questions tagged united-states law-enforcement .

31
How often are guns used by private citizens in self defense per year in the United States?
16
Are SWATs in the US mostly used for serving marijuana warrants?
10
Are the ABA and IRS foreign-owned private debt collection agencies?
4
Are The Young Turks Funded by George Soros?
9
Are there more tigers in private ownership in the US than there are in the wild?
38
Are these photos of protests posters against the Obama Administration real?
16
Were 70 COVID-19 testing sites destroyed during the George Floyd protests?