Can eating a few cherry pits lead to cyanide poisoning?

In 2017, a Serbian news station reported a UK man was hospitalized after eating cherry pits

Matthew Krim (28) ate cherries and out of pure curiosity swallowed three pieces along with the pits. [...] Ten minutes later he got sick and his temperature jumped. His partner Georgina Mason, 23, called an ambulance and after telling them what he had done, Crimea was rushed to hospital.

The internet disagrees on the dangers.

Is there reliable research that shows adverse effects from swallowing only a few pits?

Cherries are known to contain compounds are toxic in high enough dosages. But that ingredient is unlikely to be what caused this man's hospitalization.

Who is the source?

B92.org is the website of a Serbian media outlet, that has been around since 1989. They are the largest media outlet in Serbia. I couldn't find any reports of motivation/bias, systemic or otherwise. I see no reason to discredit them outright, especially in regards to this article.

Other reportings of Cherry Pit Poisoning

In July 2017, the Daily Mail reported on a similar case. However, in this case the man crushed them up before eating them. Given that there is a first hand telling of the events, this makes for a more reliable reporting. However, the Daily Mail has a certain reputation, which they live up to by getting something wrong.

Is the claim plausible?

The stones of cherries contain a compound called amygdalin, which breaks down into hydrogen cyanide when ingested. A lethal dose of cyanide would be 0.126g - taking into account the UK average male body weight of 84kg - and a single cherry stone contains roughly 0.17g.

The first part of this claim seems to be supported by the literature, however, the claim that a single cherry pit contains actual cyanide is not. If you read the article, you'll see that cite no sources for this claim, and perhaps we'll see why.

It is generally accepted that the ingredient in cherry pits that is toxic, and other stone fruits, is Amygdalin. Amygdalin is converted to Hydrogen Cyanide in the body. The amount of Amygdalin in a cherry pit is as high as 3.89mg per gram of pit. A cherry pit weighs about 1 gram. Being generous, lets say the 3 cherry pits weighed 4 grams, giving 15.56mg of amygdalin.

Cyanide exposures of 1.5mg/kg are known to cause acute toxicity. 1 gram of amygdalin releases 59mg of HCN. This means our 15.56mg of amygdalin releases 0.918mg of cyanide. Amygdalin content of seeds, kernels and food products commercially-available in the UK by Islamiyat Folashade Bolarinwa, Caroline Orfila, Michael R.A. Morgan, et al. 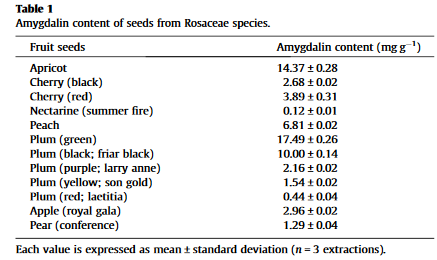 So is that enough?

Newton et al, 1981, found an LD50 of 522mg/kg body weight, which is the lowest lethal dose found in the literature, however others note it being higher at 880mg/kg BW. The latter study also found that amygdalin was 100% lethal to rats (as in this entire sampling of rats died) at only 600mg/kg when administered with a compound also in cherries (beta-glucosidase). The German Federal Institute for Risk Assessment gives an acute reference dose of 75 μg CN⁻/kg in food (Abraham et al) containing intact β-glucosidase, which increases the uptake of CN⁻ in the blood.

The average weight of an European is 71kg, so the required exposure to cyanide would be 5.33 mg of cyanide for the acute toxicity, or 37.1 grams of amygdalin to meet the LD50, however, our educated guesses are an order of magnitude lower.

Note that all the procedures in these studies describe grinding up the pits or stones. Given that whole cherry pits are not broken down in the stomach, this is necessary to absorb any meaningful portion of the amygdalin contained. Another consider is that some stones become fragile and fall apart as the fruit ripens and rots, and in these cases there is some significant risk, especially with children. But since the article describes him swallowing the cherries whole, it seems highly improbable that he could have metabolized any amygdalin at all.

Given all this, its fair to say that the Daily Mail completely missed the mark by alot here, since there is no cyanide in cherry pits, and its doubtful he ground them up to same standard as the studies. Furthermore, grinding them with your teeth will probably result the shell having sharp edges, causing what's known as a "mechanical stomach ache" as it scratched his innards on the way down. It would still not be fair to doubt the man's story, since Dr. Google has terrible beside manner and will scare the hell out of you. It's also possible that an allergy was triggered or that there were other complications.

BONUS: The process of conversion of amygdalin to cyanide in the body. AND! The symptoms of acute cyanide poisoning 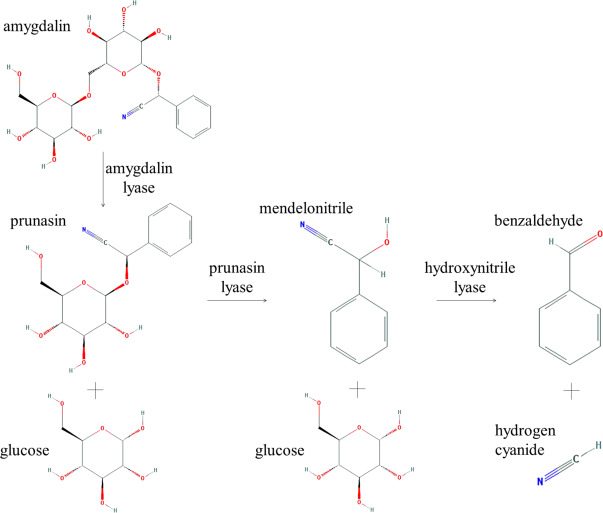 Symptoms of cyanide poisoning include stomach cramps, headache, nausea and vomiting, and can culminate in cardiac arrest, respiratory failure, coma and death.

The dangerous chemical found in the seeds of stone fruits is called amygdalin. Poisoning can occur when the pit and seed are crushed or chewed before swallowing, releasing the amygdalin. Amygdalin is then converted by the body to cyanide.

The amount of amygdalin in the seeds of stone fruits varies widely, both between different types of stone fruits (e.g., cherries vs. plums) and even within the same type of fruit (e.g., cherries from one tree vs. cherries from another tree or geographic location). This makes it difficult to determine the number of seeds it takes for poisoning to occur. In general, unintentional ingestions do not lead to poisoning because it is unlikely that someone would chew or crush the kernels/seeds prior to swallowing them, and because unintentional ingestions tend to be of small amounts.

So it is unlikely, but not impossible, that eating a few cherry pits lead to cyanide poisoning.

Not the answer you're looking for? Browse other questions tagged nutrition safety .

3
Has anyone died from eating fruit pits that contain amygdalin (cyanide)?

18
Is poisoning possible from preservative on orange zest?
38
Can eating too much sugar cause diabetes?
11
Can you die from eating chili peppers?
35
How many almonds does it take to get cyanide poisoning?
17
Do firefighters avoid eating pork?
6
Can eating the right foods avoid BRCA1 breast cancer?
7
Can eating too much fibre cause Hemorrhoidal disease (or piles)?
7
Can eating sugar result in addiction?
38
Should I cut off black banana ending before eating?