Is there more police brutality in cities controlled by the Democratic party?

Democrats, from top to bottom, are running the cities with the worst police brutality in America right now.

Is this true? It seems to have been picked up by several right wing news outlets, including Fox, but none of them seem to have actually verified it or provided any statistical evidence.

A major problem here is how to define "worst police brutality in America"? I don't think we can have any conclusive evaluation of Shaun King's statement without a clear definition and an appropriate collection of data. However, as a first approximation, let's take the following list of cities ranked by the rate of people killed by police per million inhabitants, 2013-2019. 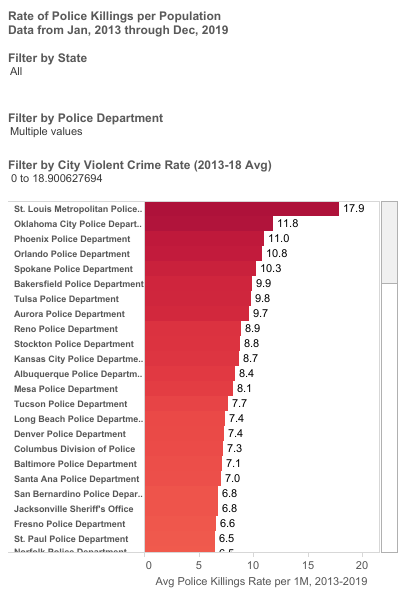 St Louis is extreme, and there are many other Democrat-run cities on this list. But Oklahoma City (#2) has had a Republican mayor throughout this period (mostly Mick Cornett), as had Tulsa (#7) (Dewey F. Bartlett Jr. and G. T. Bynum). This is far from conclusive proof of anything, but I do think it suggests there are exceptions to King's generalization.

This dataset uses the 100 largest cities by population. Wikipedia has a list of the mayors for the top 50, of which 35 are Democrats, 13 Republicans and 2 Independents.

It's not a very technical or precise claim, but its essence is factually sound.

Using the common measure for "police brutality" as police killings,* a large majority of the cities with high police brutality have Democratic majors. While King did not qualify it further, this claim remains mostly true even when taking into account party prevalence among mayors.

As usual, do not mistake King's claim of correlation as causation. There might be an underlying factor yielding both results; changing party control wouldn't necessarily reduce policy brutality.

Earlier this year, security.org looked at cities with high police brutality: Which cities have the biggest problems with police brutality? (The source data comes from the aggregator Mapping Police Violence.) 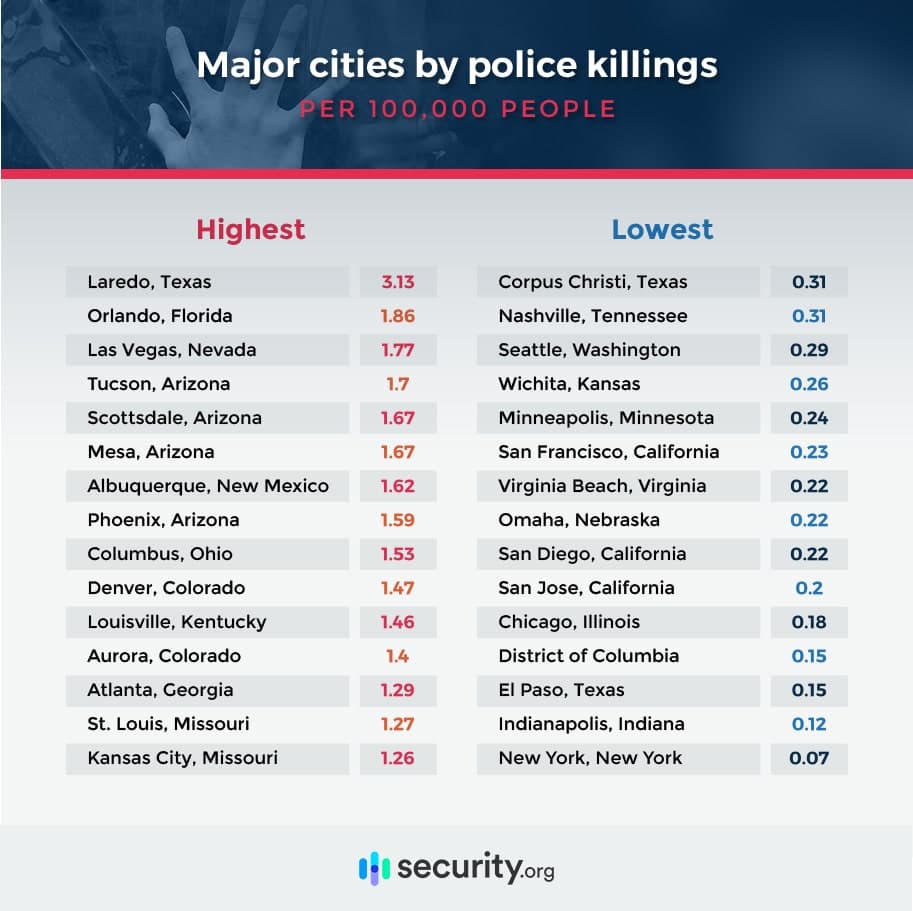 (The criteria for a "major city" isn't given, but Scottsdale is 84th most populous in the U.S., with 262k people.)

Of the fifteen cities with the most police killings, 12 have Democratic mayors and 3 have Republican mayors.

While the above renders King's statement true, it's relevant context to understand how much of this is due simply to prevalence of Democratic mayors.

Of the fifteen cities with the least police killings, 8 have Democratic mayors and 6 have Republican mayors:

Of the top fifty U.S. cities, there are 35 Democrats and 13 Republicans. It would seem that large cities have mostly Democratic mayors, but not quite so many as to be proportionate to their presence in the earlier list.

* These numbers are for all police killings, whether officially ruled "justified" or not. This approach addresses a common concern about bias in judicial treatment.

Yes, but very likely not for the reason implied by the question and it's source:. As others have pointed out, you get higher rates of everything in more dense populations which tend to not vote for Republicans.. for completely unrelated reasons to that of police-violence. The connecting thread is precisely what #BLM proponents claim to be the problem: The hiring practices, nature, and militarization of police forces across the country. This has not been an issue on the docket of the cities' Mayors. It's not that they can't as much as they haven't and instead rely on internal processes.

It's like comparing charts that have a similar curve and then trying to assume a correlation between them - or asking for proof to explain a phenomenon that might be better explained through more direct means.

The mayors of America’s larger cities, nearly all members of the Democratic Party and some of whom are black or Latino themselves, must reckon with political priorities that appear in conflict — living up to their rhetoric as champions of marginalized communities while maintaining a close working relationship with police departments often accused of inflicting harm.6

Not the answer you're looking for? Browse other questions tagged united-states politics police .

52
Is there currently riots/looting *ONLY* in Democrat cities in the USA?

18
In the USA, do supporters of the Republican party make more charitable donations than supporters of the Democrats?
11
Are there any underground cities in the United States?
38
Is there a correlation between voting for the Democratic Party and gun crimes in the USA?
48
Does the United States have more tax preparers than police and firefighters combined?
14
Are police officer's families 2-4 times more likely to experience domestic violence?
52
Is there currently riots/looting *ONLY* in Democrat cities in the USA?
71
Did Martin Gugino, 75, who was injured at the Buffalo, NY protest, provoke the police?
15
Do Black Lives Matter donations get funneled to the Democratic Party?