Do 37% of people in the UK believe that their job either makes no difference or makes the world worse?

According to David Graeber:

They discovered that people in the UK, 37% agreed that if their job didn't exist either it would make no difference whatsoever or the world might be a slightly better place.

This leads Graeber to believe that those people are working in pointless jobs that provide no value as judged by the employee at all. Is that a reasonable interpretation of the state of affairs?

The first real source for this is an essay Graeber wrote in 2013:

"On the Phenomenon of Bullshit Jobs: A Work Rant" which he then reworked into a full book on the subject of

A YouGov poll in 2015 then found that

37% of British workers think their jobs are meaningless 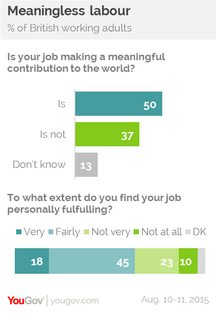 He just quotes that actual number from that poll in the linked talk. He also could have used numbers for the same question from the Netherlands, where it was found to be 40% think of their job as 'meaningless'.

As it's 'a poll', different polls might turn up different numbers, but alienation from work is not a new phenomenon, so actual numbers might be higher or lower.

Criticism of this line of reasoning is then:

However, as Nick Irving puts it in his article Unpacking the Millennial Work Ethic: The book does almost no work to address the complexity of using self-reported, self-selecting sources, despite the enormous interdisciplinary literature on such topics. […] There’s no effort to address the contingent cultural (or even social) factors that might lead to a person thinking their job is pointless. – in other words – how can we be sure which jobs are bullshit jobs and which are not, when it’s based on a subjective perspective, which can be misleading? […]

Is there any objective way to measure the bullshitness of the job? The people surveyed by YouGov were asked about “meaningless”, those in the Netherlands about “meaningful contributions to the world”. That might be the key to our perception of a job being bullshit.
— Jędrzej Chrząstek : "'Is your job meaningless?' – if you answer “yes”, you’re probably right – a few words on bullshit jobs", SaleManagoBlog, December 30 2019

Although generally, the whole book was mainly praised for rigour in methods, and subjective self-reporting or not, the numbers from YouGov match those Graeber quoted in his earlier book. They are external corroboration, since Graeber might have inspired the later poll, but didn't conduct it. 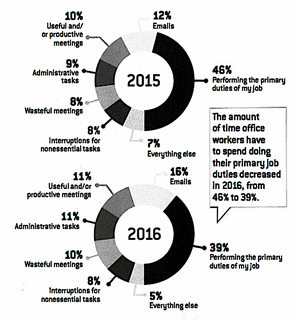 Mark Buchanan , "Too Many Jobs Feel Meaningless Because They Are", Bloomber, August 01 2018.

Not the answer you're looking for? Browse other questions tagged economics david-graeber .

17
Is extreme poverty in the world getting worse?