Does the US no longer make antibiotics?

On June 25th, 2020 Tucker Carlson claimed during his show:

The most powerful nation on earth no longer makes antibiotics.

He's obviously referring to the USA. Is the USA no longer manufacturing antibiotics? And is that absolutely true or just the domestic production is very low compared to imports?

According to a 2017 Bloomberg piece

Are U.S. drugs made abroad?

For the most part, no. About 75 percent of U.S. spending on drugs is for products that are manufactured domestically.

That does not include the raw ingredients though, which may be imported, nor does that article break it down by drug type. Antibiotics are generally not very favored by manufacturers because of the low profits involved, so maybe Calrson is correct on that category.

Yes and No... mostly yes, most manufacturing sites are outside the US.

Looking first at pharmaceutical drugs in general there is the FDA Safeguarding Pharmaceutical Supply Chains in a Global Economy from October 30, 2019.

The United States, through its investment in biomedical research, has become a world leader in drug discovery and development, but is no longer in the forefront of drug manufacturing. Historically, the production of medicines for the U.S. population has been domestically based. However, in recent decades, drug manufacturing has gradually moved out of the United States. This is particularly true for manufacturers of active pharmaceutical ingredients (APIs), the actual drugs that are then formulated into tablets, capsules, injections, etc. As of August 2019, only 28 percent of the manufacturing facilities making APIs to supply the U.S. market were in our country. By contrast, the remaining 72 percent of the API manufacturers supplying the U.S. market were overseas, and 13 percent are in China. (See Figure 1) FDA’s data show that the number of registered facilities making APIs in China more than doubled between 2010 and 2019.

and here is an image they show 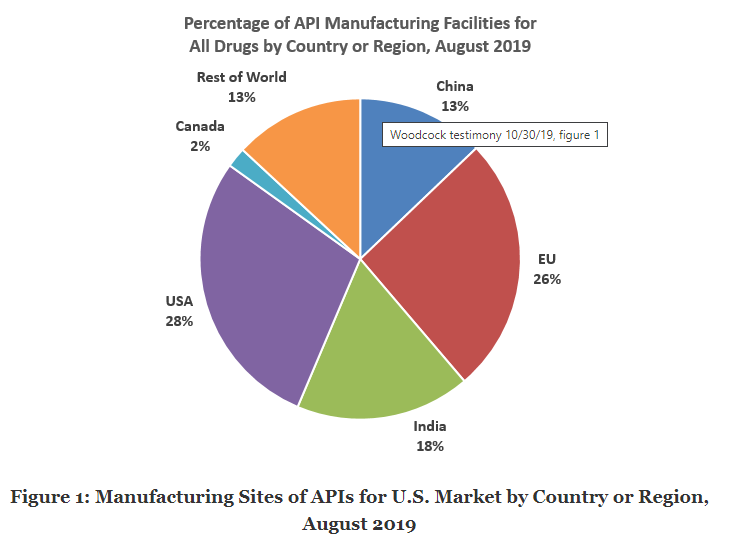 This is a bit harder to find good sources.

According to drugs.com the 10 most common Generic Antibiotics are

The following section is to provide references, I have not fleshed them out. I will try when I have some more time.

In regards to Amoxicillin: drugbank.ca Manufacturers Not Available

This paper from 2015 compares quality of Amoxicillin purchased in different locations, that were originally manufactured in 6 countries (China, Ghana, India, Ireland, Nigeria, and the United Kingdom). It is striking that despite 1.34 billion prescriptions being dispensed in the US, no manufactures from the US were tested - this leads me to thinking there is no manufacturing of Amoxicillin in the US.

In regards to Clindamycin drugbank.ca lists Manufacturers as Not Available

In regards to Amoxicillin and clavulanate Not found on drugbank.ca

In regards to Levofloxacin drugbank.ca Manufacturers Not Available

Where does big pharma manufacture

Pfizer claims to have some US manufacturing, however the website does not list any pfizer manufacturing plants.

Pliva appears to be Croatian and since their website is not English, I will conjecture this means they have no sites in the US.

A. As the largest generic manufacturer in the world, Teva is able to offer more generic prescription medications than any other company. In fact, one out of every eight generic prescriptions in the United States is filled with a Teva product!2 We use approximately 30 different Teva facilities to manufacture our products. Many of our products are made in North America and by our parent company in Israel.3 The FDA inspects each of our facilities (inside and outside of the United States) to ensure our products meet the same FDA standards of good manufacturing practices as brand-name medications.

Mylan is the world’s second-largest manufacturer of generic drugs, and though it’s run from Canonsburg, Pennsylvania, its operations three hours inland from Mumbai exemplify the central role India has come to play in the global generic-drug industry.

Proof that some manufacture occurs in the US

If we look at the antibiotic drug azithromycin (generic name for the Zithromax name brand made by Pfizer), which was developed outside of the US in the 1980's but whose patent expired in 2005, meaning there are now generic drugs available from companies other than Pfizer, we see some have manufacturing facilities in the US.

The 5 above fall into the suspension/oral category. The list of manufacturers for the injectable generic drug is significantly longer.

It is not true that no drugs (antibiotics) are made in the US, however there is a very clear trend that drug manufacture is moving outside of the US. A lot of manufacturing is done in China and especially India. Drugs as a overarching umbrella are only 28% manufactured in the US. Antibiotics statistics are not as readily available as general "drugs" but there are clearly manufacturing done in the US, but it is rare that a company only manufacturers in the US.

From my research, companies seem quick to say they have a site in the US, but it is difficult to get information about what actually happens at the site. This seems to me anyways to give off the appearance of having "token" sites in the US for looks, while producing elsewhere, such as India, which is a common drug manufacture location.

Not the answer you're looking for? Browse other questions tagged united-states medications manufacturing .

20
Does Modafinil make you smarter?
3
Does Aderall make you less creative?
14
Do antibiotics weaken your immune system?
7
Does 40% of food in the US never make it to the table?
38
Does Australia produce unique 'specialty steel'?
22
Does Turkey make the "structural steel frame" for the F-35 fighter?
13
Is hydroxychloroquine + zinc + antibiotics an effective treatment for COVID-19?